What awaits you in the Royal County? Links to ancient Ireland, rides for thrill-seekers, and fabulous natural beauty. 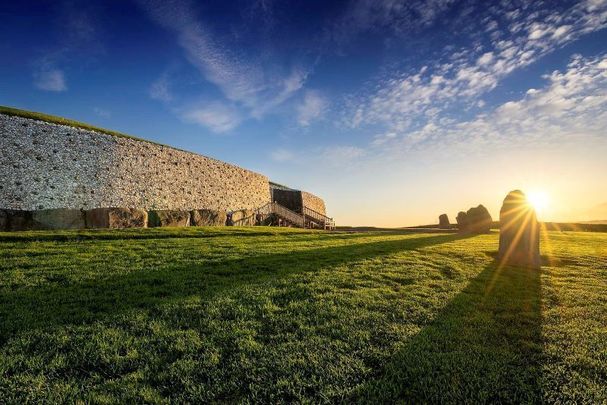 Trim Castle is one of the Boyne Valley's most spectacular attractions and a highlight of Ireland's Ancient East. Tourism Ireland

Burial sites older than the pyramids of Giza, real Irish castles, rollercoasters, and a zoo!! County Meath most certainly has something for everyone.

County Meath, known as the Royal County, was once one of five provinces in Ireland, and home to the High Kings of Tara. Although it has now been demoted somewhat to only a county status, it still holds its regal quality with some of the finest links to ancient Ireland to be found anywhere in the country.

From rock concerts to ancient burial chambers, here’s the best of what Co. Meath has to offer.

Newgrange and the Boyne Valley 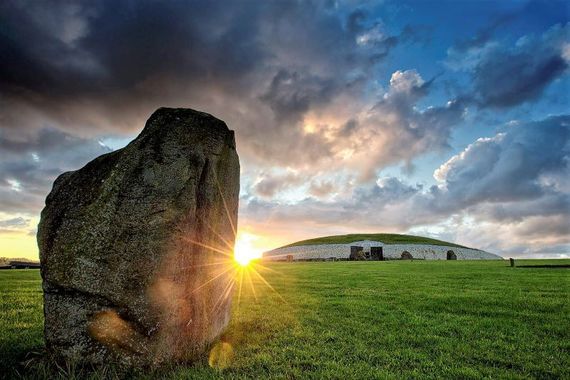 No trip to Ireland is complete without a visit to Newgrange and the surrounding Boyne Valley. The majestic burial chamber is older than the pyramids and holds the key to the country’s ancient history.

One of the principal sites among Ireland’s Ancient East, the eastern rival to the Wild Atlantic Way, Newgrange is a 5,200-year-old passage tomb built by Stone Age farmers, making it older than Stonehenge and the Great Pyramids of Giza. 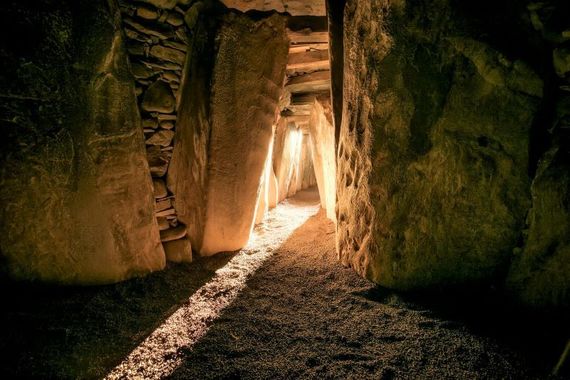 The Newgrange passageway during the winter solstice.

In an incredible feat of architecture and engineering, the monument is perfectly aligned with the rising of the sun on the morning of the Winter Solstice, allowing sunlight to flood up the passageway and light up the chamber at its end. The large circular mound is 93 yards in diameter and 15 yards high while ringed by 97 large kerbstones, some of which are engraved with symbols called megalithic art. 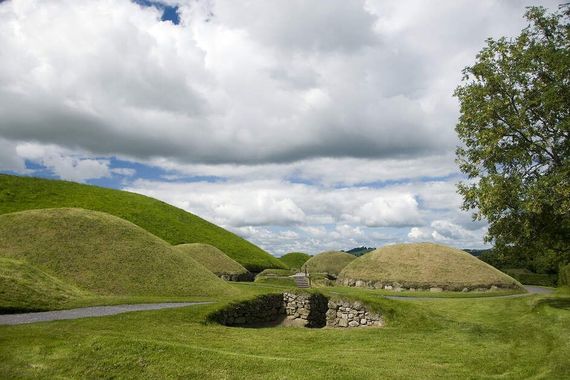 As one of the original five provinces of Ireland, Meath fared well in ancient Ireland with thanks to the rich and easily-farmed lands of the Boyne Valley and Newgrange, along with its sister mounds at Knowth and Dowth, are proof of the rich lifestyle of the Co. Meath farmers. Designated as a UNESCO World Heritage Site, the three mounds are magical to behold, knowing the depth of the history behind them and how long they have survived in a country greatly, greatly changed since their construction.

Access to Newgrange is only available via a guided tour but a full tour of the whole Boyne Valley region is greatly recommended. 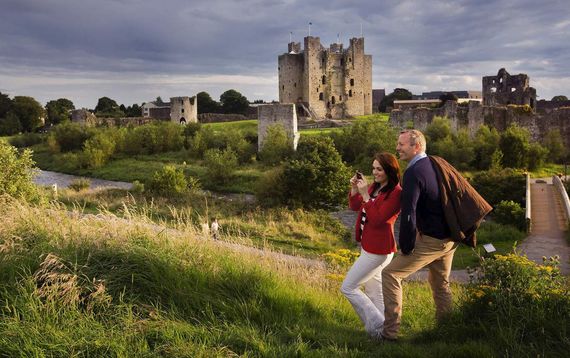 On first approaching Trim Castle, you may find it familiar, and if you’re a fan of Braveheart, then you’d be right. Trim Castle is the largest Anglo-Norman castle in Ireland and was constructed over a thirty-year period by Hugh de Lacy and his son Walter, but in recent years, it has been most noted for the part it played in filming the Mel Gibson epic.

Located in Trim town, construction began on the castle around 1176 on the site where an earlier, simpler, wooden tower stood. A massive twenty-sided tower, it was protected by a ditch, a curtain wall, and a moat, much of which is still in place.

Located on the banks of the River Boyne, it stood as one of the most powerful castles in Ireland along one of the country’s important rivers and was an imposing symbol of Norman strength at the very edge of the Pale, the area on the east coast once completely under the Anglo-Norman influence. As such, the castle would have been the site where the Normans would have faced off with the native Irish in conflict and this long history can be explored through guided tours that bring you through the castle grounds and up into the tower itself.

Ireland’s involvement in the First and Second World War is not normally highlighted too heavily in their history books. During World War One, we were fighting our own battles for independence against the British and rebelling in the 1916 Easter Rising, while the Second World War saw us as a newly independent Republic remaining neutral throughout the conflict.

That is not to say that Irish people did not fight in the world wars, however, as Irish recruitment in the British Army saw thousands take to the trenches, especially during WWI when the hope of Home Rule caused many to sign up to the cause.

The Irish Military War Museum, opened in June 2014, however, offers a great insight into those Irish who fought in the world wars and in other military conflicts in world history. Taking a distinctly non-political view on Irish involvement, the museum takes into account the highly strained relationship between Britain and Ireland through the centuries as they delve into the complex political background that saw 210,000 Irishmen from both traditions fight in the trenches during World War One while the rebellion was erupting in Dublin.

It also looks at some 80,000 Irishmen of the next generation, from the otherwise neutral Republic, who fought with the British Armed Forces against Nazism, showcasing the vehicles and weaponry from both conflicts across a 5,000 sq ft exhibit. 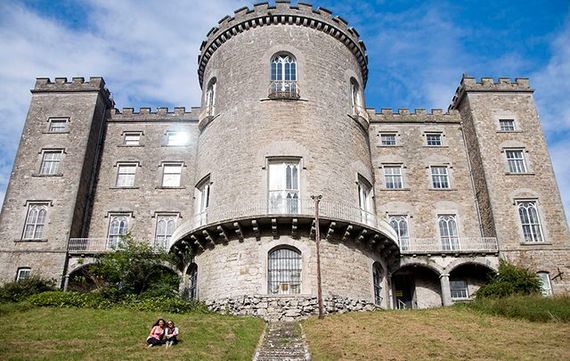 Long famous for their summer concerts which have seen the likes of The Rolling Stones, Thin Lizzy, U2, David Bowie, Coldplay, Madonna, The Prodigy and Eminem take to the stage of the 1,500-acre estate in the heart of the Boyne Valley, Slane Castle has offered thousands the chance to view some of the world’s biggest musical stars amidst a stunning parkland backdrop.

Currently owned by Henry, Eighth Marquess Conyngham, the castle has been in his family since 1701, but the history of the land goes much further back. Overlooking the castle is the Hill of Slane, where St. Patrick lit his paschal fire, following which he was summoned by the High King to Tara, beginning the start of Ireland’s conversion to Christianity. The castle also lies just a few miles upstream from the site of the Battle of the Boyne where Protestant William of Orange defeated the Catholic King James II in 1690.

Despite a severe fire in 1991, which caused extensive damage to the building, much of the existing form was constructed back in 1785 and is principally the work of James Gandon, James Wyatt, and Francis Johnston.

For those of you not familiar with the Irish classic that are Tayto crisps (as in potato chips), we’d greatly recommend getting your hands on some and making yourself the best crisp sandwich you’ll ever have.

Such is the popularity of the brand of chips in Ireland that it has its very own theme park and zoo honoring the Irish classic and their legendary mascot, Mr. Tayto.

With everything from tigers and bison to scaly reptiles and bald eagles, it quickly became a firm favorite for family days out while the theme park attracted the thrill-seeker in us all.

The most exciting thing about the park, however, is that it is also home to one of Ireland’s most epic roller-coasters and Europe’s largest wooden roller-coaster, the Cú Chulainn Coaster, named after the famous Irish mythology figure. Not for the faint-hearted, we’d leave eating the packets of Tayto until after you’ve braved its dizzying heights of 32.05 meters and 31-meter plunges, all at speeds of up to 62 miles per hour.

Opened in June 2015, the rollercoaster tosses and turns along for 1,400 meters. That’s the equivalent of 8,255 Tayto crisp packets laid out end-to-end. Featuring 14 turns and plenty of air-time, the coaster races through its course in just over a minute.

Tayto Park officially opened in 2010 and since then has expanded enormously with the arrival of eight new attractions including “Air Race”, the “Rotator,” the “Sky Tower” and  Ireland’s only 5d cinema.