North side of Dublin City is a treasure trove for tourists 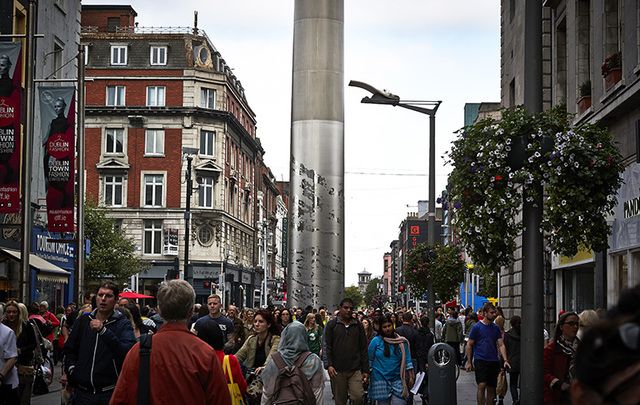 Dublin One: A view of the Spire on O'Connell Street, from the pedestrianized shopping area, Henry Street. Tourism Ireland.

DublinTown.ie has launched a new campaign focusing on Dublin city’s north-side district “Dublin One.” The historic district spans the streets of O’Connell Street to Capel Street and Parnell Street to the end of Liffey Street - with approximately 850 businesses operating in this pulsating area of the capital. Over 600,000 feet flock weekly to these Northside streets. Dublin One can discover new worlds of food every day with cuisines from over 17 different ethnicities available. From African, Asian and Brazilian to Greek, Japanese, Moldovan, Vietnamese and good old Irish food on offer, the choice is endless.

The new brand campaign, “Dublin One,” was launched at The Tram Café, Wolfe Tone Square, next to Jervis Shopping Centre. DublinTown.ie exists to highlight all that the city, lovingly referred to by its locals as “Town,” has to offer. The initiative was created for both locals and visitors as a knowledgeable source of information on everything from shops to culture and history to events.

Giving a brief snapshot of Dublin One, DublinTown.ie provided some states per week. This is Dublin One…in a nutshell:

Dublin One district in a nutshell (some stats per week):

- The Church Bar uses some of the original stage from the Adelphi Theatre on Middle Abbey Street. Among the famous acts to walk on the stage were The Beatles, Fleetwood Mac, Bob Dylan, The Rolling Stones, The Beach Boys and Johnny Cash.

Richard Guiney, CEO of DublinTown said his group and “the businesses of Dublin One, want to encourage visitors to experience the unique busy streets, the heritage, and history which is brought to life through culture, diversity, and people, making Dublin One the heart and soul of Dublin city.”

Here’s a promo video about Dublin city released by DublinTown.ie in 2012:

For more information on activities in Dublin One please visit www.dublin-one.ie.