The ancient Irish tradition of telling stories and singing songs around an open hearth fire is being revived at a beautiful thatched cottage which is just a short walk from the heart of Galway City. 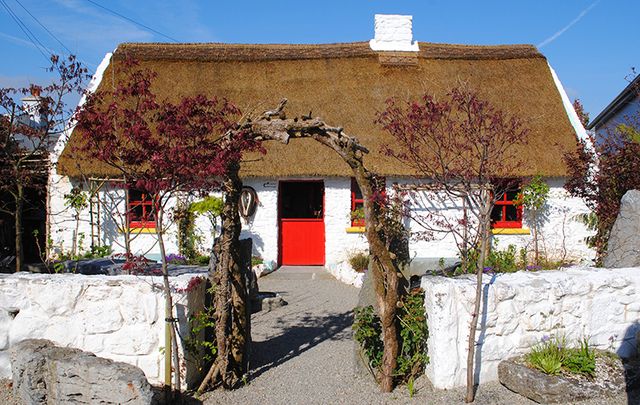 Katie's Claddagh Cottage, Galway, is everything you need to travel back in time in Ireland.

The ancient Irish tradition of telling stories and singing songs around an open hearth fire is being revived at a beautiful thatched cottage which is just a short walk from the heart of Galway City.

The Claddagh Cottage, located in the heart of the famous old fishing community on the west bank of the River Corrib, is providing visitors with fabulous insights into what life was like in the West of Ireland a hundred years ago.

Visitors to Katie’s Cottage, a short 400-meter stroll from the medieval heart of Galway, are guaranteed a friendly welcome, a warm cup of tea, and a chance to imagine what life was like in the Claddagh a century ago.

Over the past year, site owner Mike Walsh has lovingly – and painstakingly – recreated the kind of thatched cottage which hosted a distinct Gaelic-speaking fishing community just outside the city’s walls until the village was demolished in the 1930s.

“It’s a replica of the thatched cottage I grew up in. Most cottages here were two-roomed cottages. I always liked the idea of developing a cottage here, because I was born in one. It’s non-residential, purely for performance and community use,” he tells me over a hot cup of tea.

Mike says his aim was to recreate the atmosphere of a Claddagh cottage between the years 1900 to 1910. Visitors can experience what life was like in the impoverished fishing community at a time when so many West of Ireland people were setting sail for the Americas.

“We have the turf fire banked up at night so that it never runs out,” he says. “You have your cauldron pot, your pans, and your pot for breaking bread. We show visitors how people here used to hang smoking and salted fish, in the days before ice was widely available.”

Read More: The remarkable story of the Galway Claddagh community

With the help of enthusiastic and generous locals, Mike has filled the cottage with clothing, hand-made tools, artifacts, and memorabilia from the late 19th and early 20th centuries.

The Claddagh village used to have its own Irish-speaking King, who led the fishermen out to sea, and Mike shows visitors the implements used by the locals to build their traditional Galway Hookers.

A combination of grinding poverty, improved fish storage conditions, and a deadly outbreak of TB led to the demolition of the beautiful stone dwellings in the village, which was once home to 820 fishermen at its peak in the early 19th century.

Storyteller Brian Nolan, who regularly brings guided tour groups to the cottage, says that Katie’s Cottage has allowed local people to reconnect with their wonderful folk history and traditions.

“It’s the first cottage built in the Claddagh in well over 150 years. This has been the greatest unanswered question in Galway for the past 50 years. People keep asking us locals where the Claddagh is after hearing the Bing Crosby song, ‘Galway Bay,’” he says.

“It’s a big disappointment to them when they find out that the Claddagh is just a modern city suburb these days. Now, in this traditional cottage, Mike has managed to recreate the magic of sitting by an open fire on the shores of the bay.”

Only a few weeks after opening, the cottage was already home to weekly storytelling and Irish dancing events. It can comfortably accommodate up to 60 people and visitors are politely informed to put their mobile phones away once they enter through the half-door.

“The locals here had disconnected themselves from the past, but they have embraced the cottage now. It’s almost like their genetic memory has kicked in. People are bringing bits of memorabilia down here to show them in their local community museum,” says Brian.

Brian says tourists love to just sit and chat around the fire or to lean out the half-door. He’s been amazed by the number of talented singers and storytellers who have shared songs and stories in the few short weeks since he began taking walking tours to Galway’s newest folk museum.

Although many tourists express disappointment that the ancient fishing village was demolished in the 1930s, Brian is full of understanding for the reasons why the Irish authorities did so.

“A lot of people forget that all of those houses were covered in smoke. These people had hard lives, and very few creature comforts. The folk history of the past 200 years was passed on by the fireplace. This was a village that had been built by poor people and they had very little money for reinvesting,” he says.

Visitors from as far away as the United States and Australia become visibly moved during a visit to the house, as many of them come face-to-face with a glimpse into their own family history.

“The people of the Claddagh are recreating their own history here through stories and folk songs,” he says. “We want to recreate what life used to be like here, which is why we ask people to turn off their mobile phones.

“We have life-sized famine figures here. People are physically moved. It seems to get them to their core. One man broke down in tears here. He told me he had grown up in a cottage just like this, with nothing, in the Scottish Highlands. He remembered the mice in the thatched roof and in the fat of the pan in the mornings.”

Brian says it is good to remind Irish-Americans of the grinding poverty many of their grandparents and great-grandparents left behind them, before enjoying a song, a story, or a dance by the fire.

“I lived in the United States for 18 years. Many Irish-Americans don’t want to talk about the extreme poverty their ancestors left behind, the lack of running water or the fact that they didn’t have indoor toilets,” he says.

“They want to talk about the joy of moving to America, making money, and being able to come home on holidays. It can be important to remember where they came from and to reconnect with their past, just as the people of the Claddagh have done.”

Further details on their website. For a personalized walking tour of Galway, find Brian Nolan at GalwayWalks.com

Ciaran Tierney is a journalist, blogger, and Digital Storyteller, based in Galway, Ireland. Find him on Facebook.