Top ten things to do and see in Dublin (VIDEO)

This gorgeous clip reminds even the most jaded Dubliner why this little city is something special. 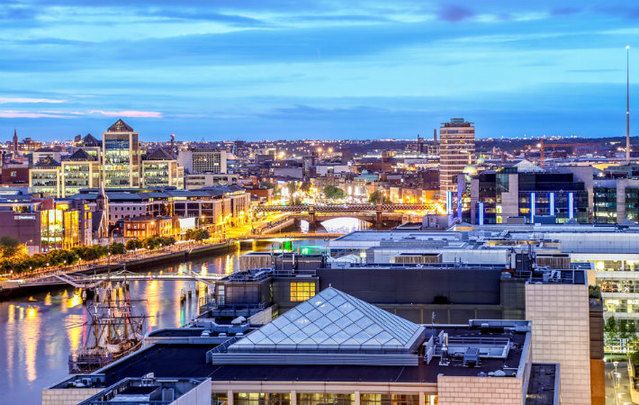 This gorgeous clip, released by Tourism Ireland, reminds even the most jaded Dubliner why this little city is something special.

Whether you're planning your first trip to Ireland's capital city or you're a Dubliner looking for something to do this weekend you could do a lot worse than looking at this video. The tourism marketing board's new video has been released "to encourage people around the world to come and visit the city in 2016," and we think it's a job well done.

On the release of the clip the CEO of Tourism Ireland, Niall Gibbons, said "Blending culture, history and scenery, Dublin really is a city that offers something for all our visitors – from the bustle of Temple Bar to the tranquillity of the Phoenix Park. Our film includes beautiful footage – showing Dublin at its very best – which will help entice prospective visitors everywhere to come and visit the city this year.”

How could you resist, right?

Here's a short run down on their top ten picks:

Nestled between O'Connell Bridge and Grafton Street is a wondrous oasis in the middle of the city, which just happens to be home to the Book of Kells and the oldest university in Ireland. Even if you only take a stroll through the grounds you'll fall in love with this spot. Originally founded in 1592 Trinity was modeled on the universities of Oxford and Cambridge.

Just four miles from O'Connell Street's GPO is the largest walled city park in Europe. This amazing lush green park is home to tree-lined avenues, and since the 17th century it has been home to a herd of wild fallow deer. It's also home to the Áras an Uachtaráin, home of Ireland's president and the residence of the Ambassador to the United States.

Inside the Phoenix Park is the Dublin Zoo, the largest zoo in the country and one of the city's most popular attractions. Dating back since the 1831 the newly remodeled zoo is spread over 69 acres with areas including the World of Cats, World of Primates, The Kaziranga Forest Trail, Fringes of the Arctic, African Plains, Birds, Reptiles, Plants, City Farm and Endangered Species.

This more than likely needs no introduction. It's Ireland's most visited tourist attraction - the home of the black stuff, Guinness. It's home to seven floors dedicated to the history and brewing of Guinness. Located right by St. James' Gate, where Guinness is made, the building also includes the Sky Bar, with one of the most stunning views of the city.

Even if you've visited the Storehouse before there's always more to explore. This year they opened the experimental cafe where you can drink the produce right where the good stuff is made. You can sample Guinness beers such as Hop House 13 Lager, Dublin Porter, West Indies Porter, and a range of small batch experimental beers.

This area gets a bad rap as being party central, filled with tourists and bachelor parties, but this is not the whole truth. Yes you can party hard on the cobbled streets of Dublin's cultural quarter but you can also do some great shopping (Siopella, Folkster, Jam Art Factory), take in some culture (Irish Film Institute, The Project Theatre, The Photograph Archive) of have a nice meal (Chameleon, Bunsen Burger, Il Vicletto). So! Don't judge a book by its cover.

The home of Ireland's Gaelic Athletic Association of course the best time to visit this site is when there's a match, football or hurling, kicking off. However, this northside icon is also home to the GAA museum and the Etihad Skyline Tour, which literally lets you walk along the top of the arena.

The Woolen Mills, on the River Liffey, right next to Ha'Penny Bridge, was an iconic business in Dublin for over 100 years. Now it's been taken over by award-winning restaurateurs and it's going down a storm. Spread over four floors, with views of up the river, you can sample modern Irish food at its best here. From coddle and soups, to a modern twist on donuts and craft beer...Can you tell we're fans.

This museum, located on St. Stephen's Green, in an 18th century Georgian townhouse, is home to a collection of over 5,000 artifacts, donated by the public. From photos of Maureen O'Hara to letters and road signs - these objects tell the story of Dublin and Dubliners.

The branch of the National Museum located on Kildare Street, next to the National Library and Leinster House, hold the full title "The National Museum of Ireland – Archaeology." This is literally where Ireland keeps its treasures - from the gold of Vikings to the medieval period.

Famous examples of early medieval Celtic metalwork include the Ardagh Chalice, the Tara Brooch, and the Derrynaflan Hoard. Prehistoric pieces include the Iron Age Broighter Gold and over 50 gold lunulas (not all on display), and other Bronze Age jewellery. And don't forget the perfectly preserved bog bodies of Celtic Kings.

Now a museum this was the prison which held Irish revolutionaries, including the leaders of the 1916 Easter Rising. This building symbolizes the tradition of militant and constitutional nationalism from the rebellion of 1798 to the Irish Civil War of 1922 to 1923. Leaders of the rebellions of 1798, 1803, 1848,1867 and 1916 were detained and in some cases executed here. An amazing and educational experience.

Just 9.6 miles for Dublin's city center, Howth is a beautiful fishing village in the northern suburbs of the city. A visit to Howth Head can include an eight-mile hike, amazing views of the city and the surround islands and sea. Howth's also home to some great restaurants, bars and has great events such as festivals, markets and gigs. A great day trip for any visitor.