They have invited 50 international artists to use different buildings throughout the city as their canvases. 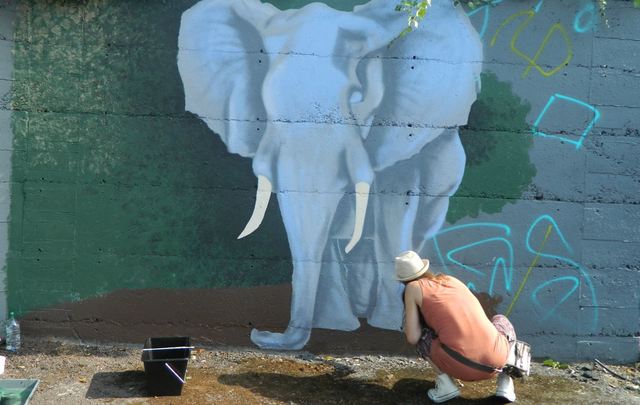 Waterford Walls, the international street art festival in Co Waterford, is celebrating its fourth year this summer and will welcome an estimated 10,000 visitors.

Aiming to transform Waterford City into an open-air gallery, Waterford Walls has invited 50 international artists to use different buildings throughout the city as their canvases.

The festival has expanded their schedule this year from three days to ten days, allowing artists more time to create their work.

While the topics of each art piece can vary, the Waterford Walls team and local city council team up to make sure none of the artwork is too “political or insulting by nature.”

Waterford Walls received more than 200 international submissions from artists hoping to participate in the 2018 festival. The pool was narrowed down to 50 artists who will descend upon Waterford City in August.

Speaking of the 2018 festival, the largest one to date, organizer Edel Tobin said, “We have live music, workshops, a food market, art trails, family activities and more and we are expecting a big turnout from locals and tourists alike. Every year we are amazed at the huge show of support and we know this year will be no different.”

Read More: The Irish flag was flown for the first time 170 years ago in Waterford

However, hoping to maintain the festival’s “grassroots” feel, organizers are on the hunt for expanded funding that doesn’t rely on corporate sponsorship.

“Part of our funding comes from Council, and some from the Arts Council,” Tobin said to TheJournal.ie. “The rest is knocking on doors, asking for sponsorship – it’s a labour of love. Realistically we have about 60% of what we need to try and put this on.”

“The festival is at risk in the sense that we can’t keep going the way we’re going – we do need more support. It’s a voluntary run festival, but there are actually two people working on it all year round.”

Tobin notes the cultural impact that Waterford Walls has on the city: “Our feedback has been overwhelmingly positive – people changing their route to work to pass their favourite mural, people coming out of their homes to thank artists for visiting their area.”

“The street art literally brightens up areas that were forgotten and a bit forlorn and discourages antisocial behavior. Most of the artwork is at ground level, but there’s very little vandalism and tagging, which shows the innate natural respect for the work.”

Have you ever been to Waterford Walls? Let us know in the comments!