Ireland’s food scene has truly blossomed over the past decade, with Irish dairy, seafood, meat, and produce getting the attention they deserve for freshness and purity, and Irish chefs working passionately and creatively to elevate the profile of Irish cuisine.

At the local level, Ireland has long known it has a good thing going when it comes to food, and the proof is in the pudding by way of food festivals. The ultimate celebration of Irish food, some festivals, like the Galway International Oyster Festival, date as far back as 1954, while new additions join the increasingly packed calendar each year.

So make it a priority to include a food festival on your Ireland itinerary - they’re the perfect chance to try something new and delicious, mingle with locals, and hear directly from Irish chefs, farmers, and foodies about their areas of expertise. September, October, and November, designated Ireland’s “Taste the Island” months, are an especially good time to celebrate Ireland’s food and drink.

The following are some of the biggest food festivals the island of Ireland has to offer. For more, visit Ireland.com.

“Bia” means food in the Irish language, and this festival is definitely a must for food lovers. Founded in 2014 by a group of local volunteers and business owners, the festival has grown impressively over the past five years to feature over 50 vendors, including artisan food producers, local brewers, and some of the best food trucks in the region. Held in the gorgeous heritage town of Athenry, the food festival takes place in the parkland in front of Athenry Castle, making for an experience that’s just as scenic as it is tasty.

All hail the humble spud! This Northern Ireland festival celebrates the Comber Earlies variety of potato, in addition to other local produce and artisan producers. Highlights include cookery displays by celebrity chef James Tanner, a hay bale picnic area, an artisan food market, and a vintage tractor display. This is a festival for the whole family, with potato-themed children’s crafts, an animal roadshow, and live music by the Cleland Memorial Band, the Lily of the Valley Accordion Band and the Comber Silver Band.

This charming fishing village has a regular population of under 400, but its annual seafood festival, heading into its 34th year, draws thousands. Go to sample some delicious seafood, try your hand at fishing, and partake in fun-filled family activities. You can feel especially good knowing that all proceeds are used for local development initiatives such as a community garden and improved parking facilities.

Nothing says summer like BBQ, and this massive Dublin festival is just about as summery and smokey as you can get. Now in its sixth year, the Big Grill Festival has become the biggest celebration of BBQ and craft beer in Europe, an ode to the art of cooking with fire and smoke alone. Local restaurants and grill masters from throughout Ireland and all around the world cook for 20,000 hungry BBQ fans in Herbert Park. 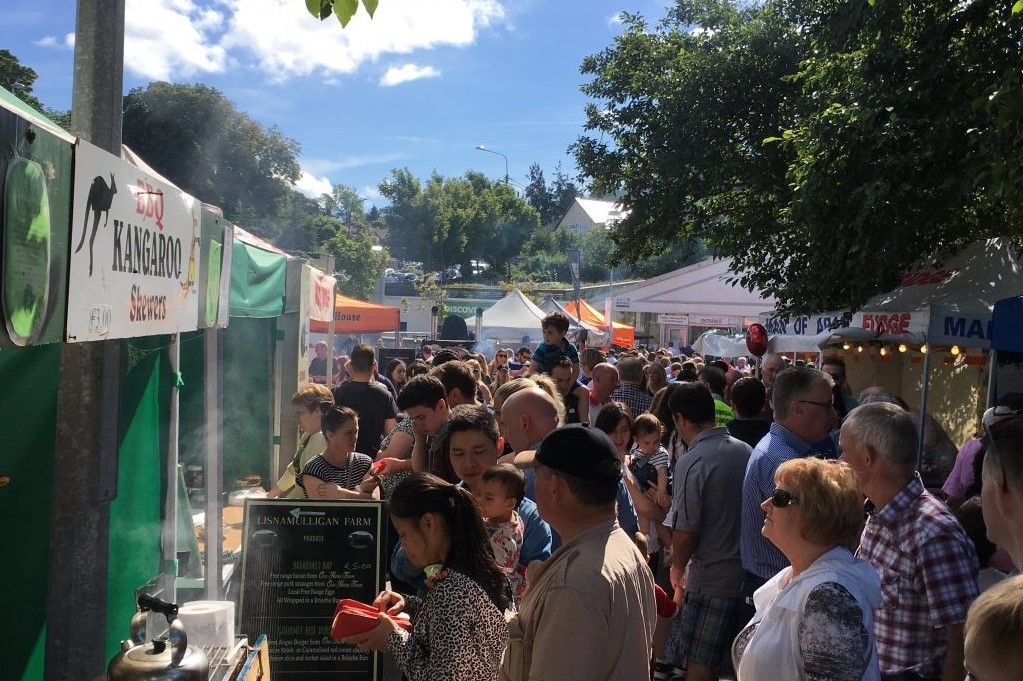 National Geographic named Donegal the #1 coolest place on earth in 2017, and this fun and food-filled weekend makes it easy to see why. Heading into its 11th year, the festival features over 100 exhibitors from Ireland and the UK and draws a crowd of nearly 30,000, making it the biggest foodie event in Ireland’s northwest. Meet celebrity chefs, sample local food and beverages, and enjoy a fireworks display over Donegal Bay. 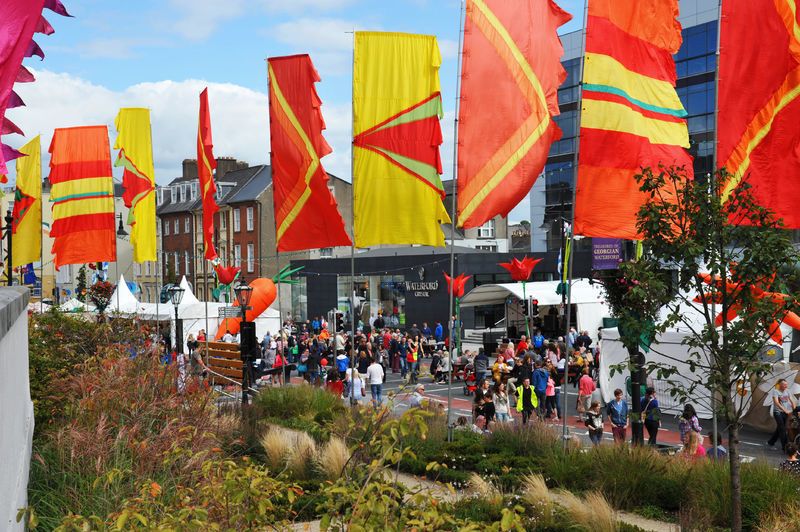 Every September, three days of foodie fun pop up in beautiful Waterford. Market stalls, tastings, cookery classes, BBQs, picnics, live demos, workshops, concerts and more fill the streets of this old Viking stronghold in a massive celebration of the food, culture and heritage of County Waterford. One particular highlight is the Blaa, a soft and floury bread roll native to Waterford, and this is the perfect place to try both traditional and more experimental versions. 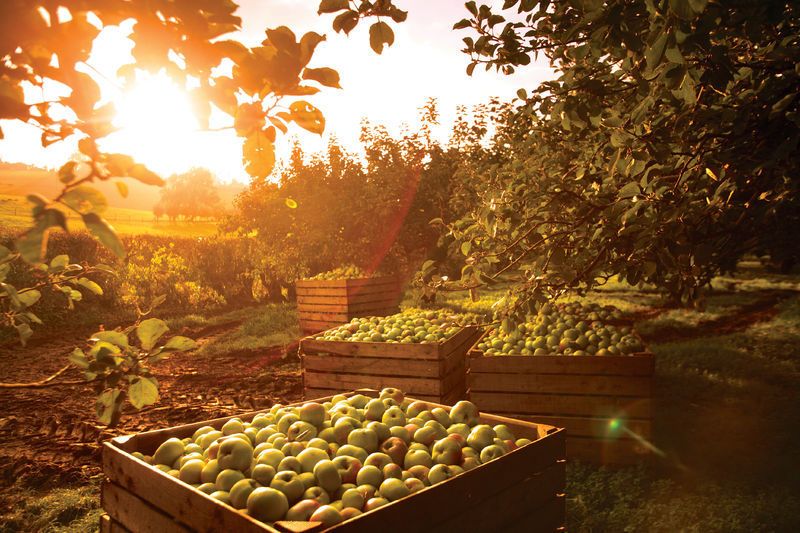 An amazing spread of mouth-watering events take place this autumn weekend in Northern Ireland’s beautiful Armagh city and its surrounding orchards. Ever wondered why it’s called the Orchard County? You’ll definitely get your answer at this festival! Enjoy a range of events and activities including open-air markets, cider tastings, culinary masterclasses, foodie film nights, jazz brunch, orchard tours, and more. 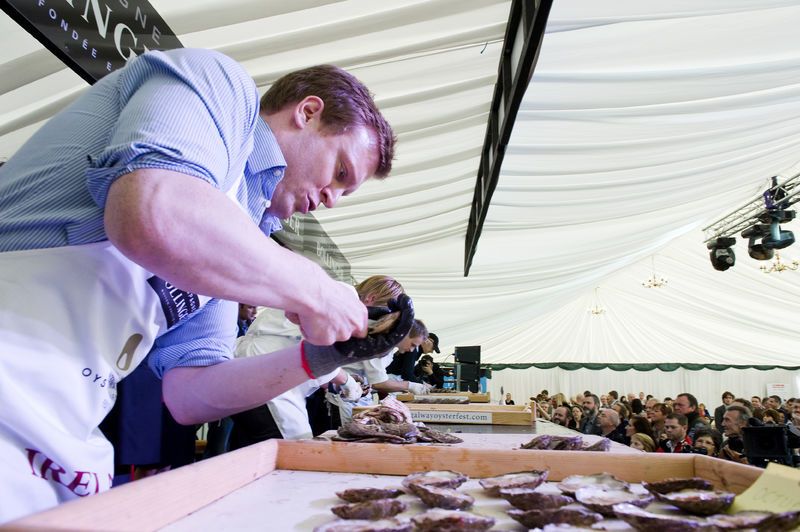 Hailed by The Rough Guide as “Ireland’s longest running and greatest gourmet extravaganza,” the Galway International Oyster and Seafood Festival began in 1954 and attracts 25,000 people to the vibrant streets of Galway, where the Atlantic Ocean meets the River Corrib. Spanning three days every September, it’s prime time to feast on oysters, Guinness, seafood, and enjoy concerts from top artists. Watch the World Oyster Opening Championships in awe and bring a touch of glamour and mystery to your weekend at the Mardi Gras Masquerade Ball on Saturday night.

The Dingle Food Festival in 2018

The first weekend of October is a special time in this famous fishing village in County Kerry, right on Wild Atlantic Way. Locals and tourists alike flock to Dingle to feast on food and drink and celebrate County Kerry’s arts, culture, and heritage. With Dingle high on the bucket list for most visitors to Ireland, this is an ideal time to go. Enjoy over 50 market stalls, whiskey tastings, wine tastings, cookery demonstrations, kids’ events, concerts, and much more in this idyllic setting. The Dingle Taste Trail, which allows festival-goers to purchase a book of tickets granting access to over 70 venues throughout the town, is also back for 2019. 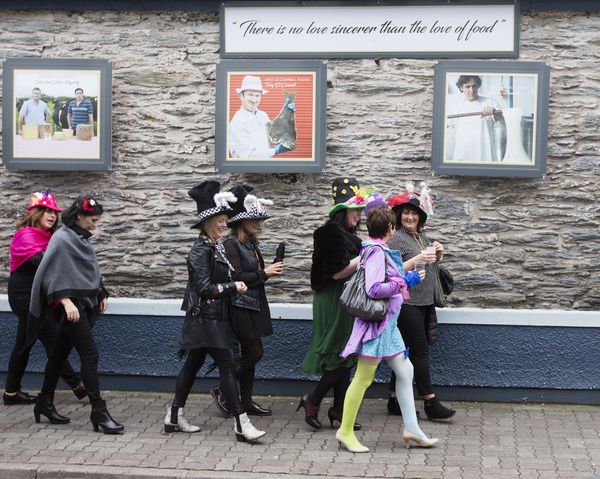 This gorgeous coastal Co. Cork town is Ireland’s gourmet food capital, so naturally their food festival is a must on any foodie’s calendar. Entering its 43rd year, this extra special food festival kicks off on Friday with a champagne reception and dinner at a Kinsale restaurant of your choice, continues on Saturday with an Alice in Wonderland themed foodie walking tour, and really goes for the gold on Sunday with a Fruits de Mer seafood spectacular.

The Slow Food Festival in Derry-Londonderry features the best local, clean, and fair food the northwest region of Northern Ireland has to offer. Slow Food is a global, grassroots movement that promotes the enjoyment of good food combined with commitment to community and the environment. The festival features a Slow Food Harvest Market, talks and demos, tours and tastings, street food, family fun and much more! 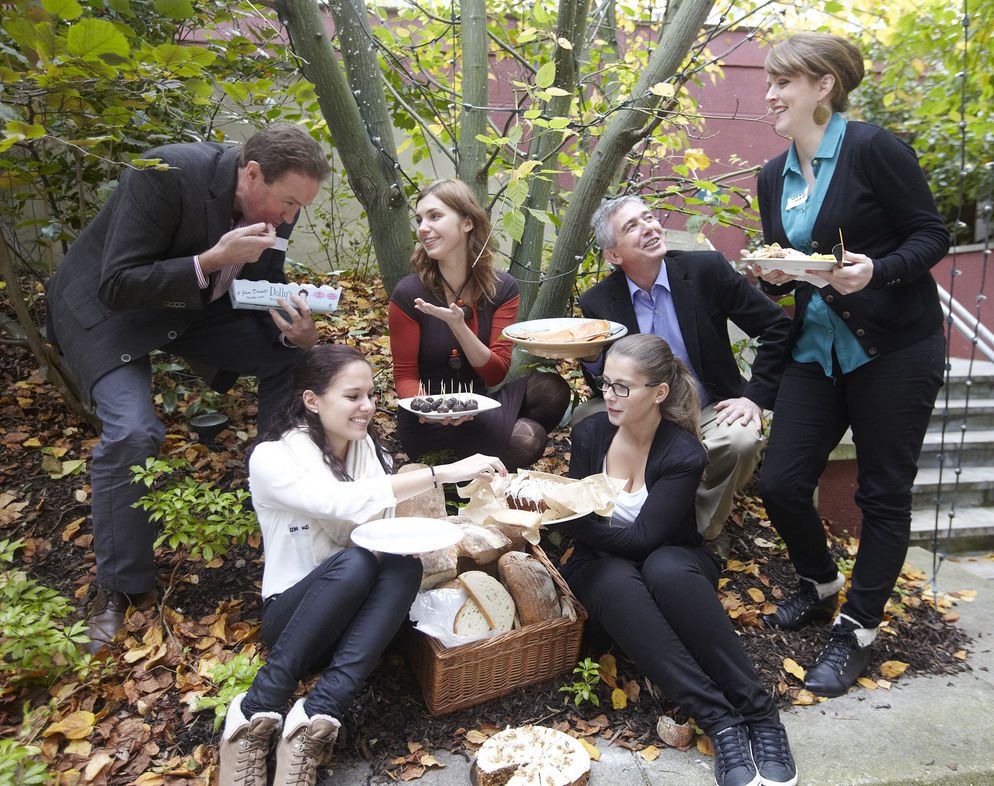 The last weekend in October is a Bank Holiday (three-day weekend) in Ireland, marking the traditional end of autumn and the harvest season. It’s also when tens of thousands of people flock to the medieval town of Kilkenny for Savour Kilkenny, its annual celebration of local produce, artisanal food makers, and the vibrant restaurant and café culture that has made Kilkenny a leading food destination. Meet Ireland’s celebrity chefs, eat your fill at food stalls and special events, attend demos, and check out Kilkenny’s growing brewery and distillery scene.