After 47 years, the mausoleum dedicated to The Liberator Daniel O’Connell has reopened in Ireland’s historic and probably most famous graveyards. 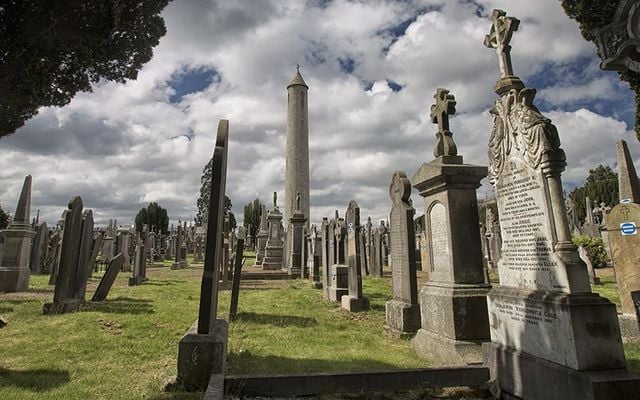 The O'Connell Tower, in Glasnevin Cemetery, in Dublin. Tourism Ireland

After 47 years, the mausoleum dedicated to The Liberator Daniel O’Connell has reopened in Ireland’s historic and probably most famous graveyard.

Newly installed staircase in the O’Connell Tower at Glasnevin Cemetery means visitors can now climb to the top the 55-metre-high tower where they will be greeted by truly unique and spectacular views across all of Dublin, Meath, Wicklow, and the Irish Sea, not seen since 1971.

Planning to visit Ireland? Book your tour with IrishCentral

The reopening of the O’Connell Tower was marked by the laying of a time capsule at the base of the tower by students from the local O’Connell School in Glasnevin. Speeches were also given by Minister for Finance and Public Expenditure and Reform Paschal Donohoe, and Chairman of Glasnevin Trust John Green.

The history of the tower

In performing this official reopening, Minister for Finance & Public Expenditure and Reform, Paschal Donohoe said “The restoration of the iconic O’Connell Tower, with a newly installed staircase that promises unparalleled views, adds yet another string to the already fulsome Glasnevin Cemetery bow.

He added “It is testament to the man we refer to as the Liberator and one of the seminal figures in Irish political life.”

The O’Connell Tower was closed in 1971 when a large bomb exploded at its base. The blast shot up through the tower, destroying its staircase and blowing out its windows. The force was such that it resulted in a large crack that spread up through its granite. This crack can still be seen today.

In partnership with the Office of Public Works (OPW), Glasnevin Trust began work in 2016 to reinstate the staircase and restore the tower.  The newly installed 198 step staircase in the O’Connell Tower is comprised of a wrought iron spiral staircase followed by hand carved wooden steps.

The O’Connell Tower was built in 1855 to commemorate the life of one of Ireland’s greatest political figures, Daniel O’Connell (1775 – 1847). The tower took hundreds of skilled tradesmen and laborers 16 months to complete. The height of the tower from the foundation to the apex of the cross is 180 feet or 55 meters. The cross at the top of the tower is cut from one piece of solid granite and is over 7 feet high.

In 1991, it was decided to open the O’Connell crypt for the first time in 20 years and a program was put in place to restore it to its former glory. Since then work has been ongoing in the maintenance and restoration of O’Connell’s monument. Completion of the restoration is an achievement, as the original plans and traditional methods employed by the carpenters and skilled tradesmen who first constructed it were used.

Commenting on the reopening, Chairman of the Glasnevin Trust, John Green said:

“The reinstatement of the stairs in the O’Connell tower will allow us to experience the full magnificence of this mausoleum. Of course, we remember O’Connell through the bridges, streets, and squares named after him, but as we approach the centenary of the founding of our state we must remember how important O’Connell is in our nationhood.

O’Connell lit a beacon for the peaceful parliamentary political process, a beacon carried on by Butt, Parnell, Redmond and, perhaps more significantly, every Taoiseach since the end of the civil war. Hopefully the exhibition inside the tower will not only enhance the climb but also help to reinstate Daniel O’Connell to his rightful position in the pantheon of Irish leaders.”

O'Connell Tower, close to the entrance of Glasnevin Cemetery.

Daniel O’Connell known as the Liberator, was one of Ireland’s greatest political figures. Born into a Catholic family on 6th August 1775 near Cahirciveen in County Kerry, he was educated in Cork and France and was called to the Irish Bar in May 1798. While in France he witnessed the horror of the French Revolution and developed a lifelong abhorrence of violence for political ends.

Planning to visit Ireland? Book your tours with IrishCentral

In 1823 he founded the Catholic Association and in 1828 O’Connell stood in a by-election in County Clare. He won the seat but could not enter parliament as Catholics were still not permitted under Penal Laws. On April 13th 1929 the Catholic Emancipation Bill was passed restoring many basic civil rights such as religious freedom, education and property ownership to Catholics, as well as allowing them to take up a seat in Westminster. In 1832 he founded Glasnevin Cemetery and stated that:

“I do not wish to make it exclusively Catholic for as the Catholics are desirous not to be separated in this life from their brethren of other persuasions neither do they wish to be divided from them in their passage from this to another world. It is intended to be open to the deceased of every sect, where perfect freedom of religious rites might console the living and according to my creed assist the dead”.

In 1840 he founded the Repeal Association which focused on repealing of the Act of Union, which in 1801 had merged the parliaments of Great Britain and Ireland.

In 1847 O’Connell set out on a pilgrimage to Rome. He died en-route in Genoa on May 15 1847. His dying wish was that his heart be buried in Rome and his body in Glasnevin Cemetery.