Sizzling summer of tourism for Ireland sees sunny outlook ahead

Performance boost as tourism soars on back of successful season. 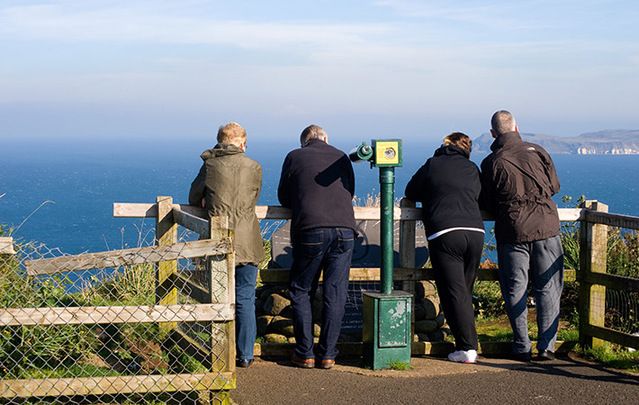 Performance boost as tourism soars on back of successful season. And who could blame them? Tourism Ireland

Summer 2015 was a particularly successful season for most Irish tourism businesses, boosted in part by return visitors and favorable exchange rates, according to the findings in the latest Fáilte Ireland Tourism Barometer.

The Barometer is a survey of tourism businesses which seeks to gauge tourism performance for the year to date and prospects for the year ahead.

Paid serviced accommodation providers recorded an excellent year so far, with a large proportion (78%) of respondents to the survey reporting growth. Hotels lead the way, with around four in five (79%) reporting an increase in business, followed by 69% of guesthouses. Even the B&B sector, which has struggled in recent years, is showing very good signs of improvement, with 70% of operators saying that their business is up so far this year.

Accommodation providers were not the only ones who enjoyed a buoyant summer and the majority (79%) of tourist attractions have also seen a boost in the number of visitors welcomed through their doors so far this year – with the overseas markets even stronger - 85% registered growth in visitors from across the waters.

Similarly, there was a fair wind for two thirds (67%) of golf clubs this year who reported an increase in their overall visitor numbers. Reflecting growing consumer confidence, the Irish golf market contributed to growth with 58% of courses enjoying an increase in domestic visitors.

Restaurants also enjoyed a busy summer with 58% reporting business to be up overall. Overseas markets have really boosted trade for restaurants with 72% reporting more business from overseas tourists so far in 2015.

Repeat visitors have been driving business in 2015 and as a result this factor maintains its place as the most frequently mentioned (69%) positive factor this year. Welcoming returning business is particularly cited by large proportions of golf clubs (88%), caravan and camping operators (83%) and hotels (78%).

Furthermore, most sectors also claim to be benefiting from the strength of the dollar and sterling against the euro, which has helped to drive visitor volumes from North America and Great Britain. The exchange rate was regularly mentioned unprompted by respondents to the survey with typical comments including:

“The exchange rate has been the major influence, especially the dollar”

Fáilte Ireland CEO Shaun Quinn emphasized “Tourism appears now to be firing on all pistons with every sector of the industry now enjoying greater growth. We have been particularly blessed this year by favorable currency rates but these aren’t steadfast and it will be important for tourism businesses to ensure they are not stranded if that tide goes out. The visitor experience of value for money, especially given that repeat visitors are an important part of our customer base, will be crucial to providing for tourism growth which is ever-green rather than cyclical.”

Looking ahead, the outlook for the future amongst accommodation providers has been strengthened by this year’s performance with a belief that tourism will continue to grow year on year but tempered by an acknowledgement that competitiveness must be maintained. The majority of paid serviced accommodation providers[i] (68%) are expecting business to be up during the rest of the year (compared to the same period in 2014), with hoteliers being particularly optimistic (73%).

Fáilte Ireland takes the performance and future outlook ratings recorded by tourism businesses to establish its regular business sentiment index. On the basis of current sentiment within the sector, tourism operators are indicating a ‘feel-good’ factor at levels not seen since the days of the Celtic Tiger:

“Looking at some of the qualitative findings from the Barometer, there is awareness in the sector that future growth cannot be taken for granted. While industry leaders are positive about the remainder of 2015 and expect steady growth next year, they also want to ensure that growth is sustainable and a high level of visitor satisfaction is maintained. Comments from respondents included:

“People are tinged with anxiety about the ability to grow business. A lack of capacity could mean an increase in price at an unsustainable rate”

“We need to remain competitive on an international playing field”

Noting this, Quinn added “Despite this resurgence within tourism, it is heartening to note that there are clear heads within the industry who appreciate that we need to maintain competitiveness and value for money in order to sustain growth. Capacity will also become a more acute issue, particularly in Dublin, as growth continues. We need to work towards a longer season, greater regional dispersal of visitors and additional accommodation provision where necessary if we are to sustain current level of growth for years to come. Within an industry which worked together to exit a recession, I am confident we can equally meet the challenges of success.”