CEO of Norwegian Air Bjorn Kjos encourages politicians to ignore unions which, he believes, are not taking the needs of the customer into account. 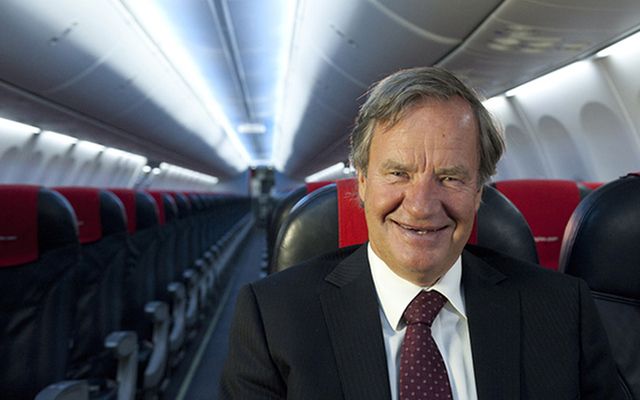 CEO of Norwegian Air Bjorn Kjos has slammed airlines and unions who attempted to put a stop to the expansion of the European airline’s transatlantic service. The Norwegian boss believes their vested interest in preserving status quo in transatlantic travel drove the long-established transatlantic airlines to try to suppress low-cost routes such as those now offered by his airline from Ireland.

Until last December, Norwegian Air was entangled in a two-year stalemate with the US Department of Transportation over the airline's efforts to begin offering services between Ireland and the US. American politicians and unions consistently called on the government to deny Norwegian Air the necessary licenses to fly between the two countries and questioned the legitimacy of the Irish-based subsidiary Norwegian Air International, dubbing it a “flag of convenience.”

The unions also claimed that Norwegian Air established the Irish subsidiary in order “to use flight crews employed under contracts governed by the laws of various Asian countries, including Singapore and Thailand.” The airline blasted this claim as fear-mongering and denied that employees would be sourced from Asia.

“They hate competition. They hate low fares. Politicians shouldn’t listen to them. They should listen to consumers,” Kjos stated.

The decision to award a foreign carrier permit to Norwegian Air International came in December 2016, more than two years after the airline had first applied. The US Department of Transportation issued a tentative decision last April granting the license, but pushback from US unions and politicians caused further delays.

The European Commission had already officially begun arbitration proceedings against the United States government when the decision to grant the license was announced late last year. The Commission believed the delay in granting the license was a breach of the Open Skies Agreement, a US-EU treaty that allows EU-registered airlines to fly to the US from anywhere in Europe.

Unions continued to fight the decision into the new year, however, calling on then President-elect Trump to overturn the transportation department’s approval of the routes.

“The new administration should immediately move to reverse the DOT’s decision regarding Norwegian Air International and revoke or suspend the foreign air carrier permit,” stated the US Air Line Pilots’ Association, reiterating again their claim that employees would be brought in by Norwegian Air under Asian contracts.

Speaking in London this week, Kjos said that these groups are not taking the wishes of customers into consideration, also casting doubt on what he calls the “legacy” airlines’ ability to create low-cost transatlantic fares.

“The consumer is always right. They want to travel for low fares and spend their money in the US or Europe. Don’t listen to groups who are trying to preserve an old-fashioned regime.

“You don’t get a low-cost airline by painting the aircraft. A lot of carriers have tried that in the past. It doesn’t work,” he continued, referring to the recent establishment of Level, a subsidiary of IAG flying transatlantic from Barcelona using Iberia flight crew.

Norwegian Air initially submitted their foreign carrier permit application hoping to be the first to offer transatlantic flights from Cork airport, a service they felt was greatly missing, and one that was welcomed by many in Ireland. Due to the delays in acquiring their license, Norwegian Air was beaten to the post by Icelandic low-budget carrier Wow Air.

Wow Air announced flights between Cork and Reykjavik from where passengers could transfer to the airline's low-cost flights to the US. Norwegian Air was still the first to offer a direct flight from Cork Airport to the US, however.

Norwegian Air International will now fly from Belfast, Cork, Shannon, and Dublin to Providence Rhode Island, which is near Boston, Hartford, Connecticut; and Stewart International at Newburgh, NY, which is, about 90 minutes by road from New York City. While these are not major airports, Kjos explains that they were chosen in order to cut costs for the customer while still offering up to 24 flights to/from the US each week.

“It has incredibly low operating costs. We fly it into very low-cost airports. Then you are not paying heavy charges, so we can offer the tickets for much, much less,” Kjos said.

A record 5,000 seats were sold by Norwegian Air within six hours in February 2017 when they first announced their new services between Ireland and America.

Fares are advertised as fares as available for as little as $300 round trip, but, some passengers were disappointed with the additional costs, such as checking a bag, that are not included in the quoted price.

Passengers will face additional fees for checked luggage ($45 for the first bag, $50 for a second), meal service including alcoholic beverages ($30) and a reserved specific seat ($30). They can also pay a $70 bundled fee for a checked bag, meal and specific seat or they can go without any amenities, food, and no checked bag, only hand baggage.