Walking through 1,000 years of Dublin's history

If you're looking to adventure stroll around Dublin, consider one of the Dublin Discovery Trail themed walking trails in Dublin City. 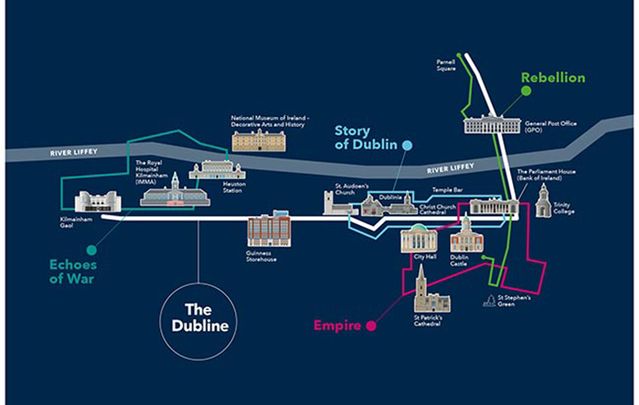 If you're looking to take an adventure stroll around Dublin, Ireland, consider one of the Dublin Discovery Trail themed walking trails in Dublin City.

Connected to the Dubline, the tourist trail (from Kilmainham Gaol, via Trinity College, to Parnell Square), the routes are intended to further open up the city and provide more ways for visitors to explore some of the city’s most interesting historic sites and attractions.

The walking trail, launched in 2015, are also accessible for visitors through Fáilte Ireland’s Dublin Discovery Trails free app. This gives visitors the chance to uncover the compelling stories of Dublin’s culture, heritage, and history through a series of engaging audio guides enriched with commentary, personal accounts, images and GPS-enabled maps with the route and stops clearly marked on them.

The trails were launched by then Lord Mayor of Dublin, Christy Burke, and then Minister for Transport, Tourism, and Sport, Paschal Donohoe TD in July 2015.

Burke, said “Dublin is rich in history and has a wealth of stories to tell. However, we sometimes take this for granted and expect our visitors to easily find this for themselves. These trails, complementing the ‘Dubline’, will open up the story of Dublin and make it more accessible to our visitors. We have a great story to tell and this initiative will allow us to tell it well.”

Welcoming the benefit of the trails and apps, Minister Donohoe pointed out “Visitors get the most out of a destination when they have the tools and assistance which help them to explore a new place for themselves. In the 21st Century, this has to include multi-media guides and apps.”

The four tourist routes are:

Retracing the dramatic events of the 1916 Easter Rising and the commentary recounts how these six days changed the course of Irish history. Stops include: Dublin Castle, Trinity College, the General Post Office and the Garden of Remembrance;

The Story of Dublin:

Echoes of War will allow visitors to explore Kilmainham and the surrounding parklands and discover moving stories of war and rebellion with stops including the Royal Hospital Kilmainham, Kilmainham Gaol, the Irish National War Memorial Gardens and Collins Barracks.

This will take visitors back in time to the busy streets of Dublin when it was one of the most important Cities in the British Empire with stops including Dublin Castle, Bank of Ireland and St. Patrick’s Cathedral.