Ireland and the UK have optimum fall conditions to catch a glimpse of amazing light display, the Aurora Borealis. 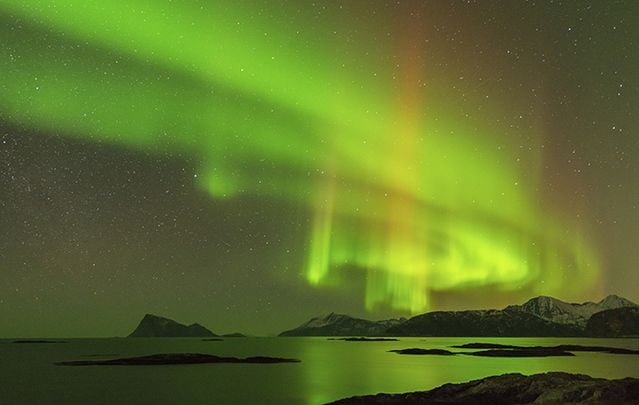 Ireland and the UK have optimum fall conditions to catch a glimpse of amazing light display, the Aurora Borealis.

Northern Light hunters across Ireland and the United Kingdom had quite a treat in 2015 when the surreal greens and purples of the Aurora Borealis lit up the night skies.

According to the US National Oceanic Atmospheric Administration this was a strong geomagnetic storm and the conditions in the skies of Ireland were perfect. This phenomenon appears due to increased solar activity. This storm was so strong that Ireland, especially those in Donegal, got a glimpse at the rare sight.

THE NORTHERN LIGHTS OVER CREEVY OVER LOOKING DONEGAL BAY pic.twitter.com/Bn2WmdfSpE

Adam Rory Porter from the Buncrana Camera Club, in Inishowen, told the Irish Independent, “I was so happy I got to share this beautiful sight with my family…We could see greens, whites, a hint of red and lots of shooting stars with [just our] naked eyes. The sky was dancing!"

Read more: Photos of the Aran Islands under Northern Lights will make you swoon

The Northern Lights appear in the skies due to the combined effect of clear skies and a "coronal hole" near the Sun's equator. This hole aligns with the Earth and high-speed solar winds buffer the planet.

A Met Office spokesman said, "We are now in a period, lasting a few weeks, where these two factors are working together to increase the chances of geomagnetic disturbances, which in turn bring with them the aurora."

“The season of the year has an influence. The science behind this is not fully understood, but the two equinoctial periods in spring and autumn tend to produce an increase in aurora compared with winter and summer."

So remember, if you’re in the North of Ireland this fall…look up!

#NorthernLights as photographed by @ritawilsonphoto at Fanad, Donegal. What an amazing shot! #Ireland pic.twitter.com/MvdyRyZsLJ