Is the Blarney Stone Ireland’s most germ-riddled tourist attraction?

You may want to think twice before laying your lips on this famous Irish tourist spot. 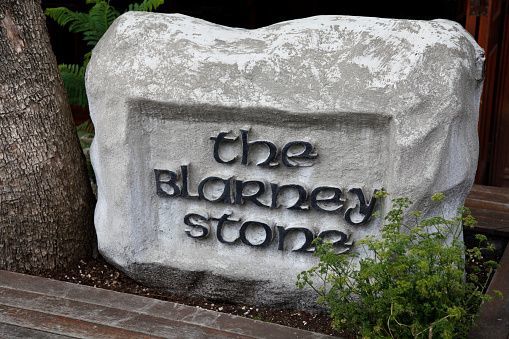 You may want to think twice before laying your lips in this famous Irish tourist spot. Getty Images

In news that may come as a shock to a few, but not to anyone who has given the matter any serious thought, the Blarney Stone in County Cork has been named the world’s germiest tourist attraction.

In this world of air-carrying diseases and germ-filled hysteria, kissing the Blarney stone could be akin to smooching a petri dish full of unfanciful delights, with some 400,000 tourists kissing the stone every year, each of them leaving their own little traces of spit behind them.

The Blarney Stone has been one of the top tourist attractions for many years. Visitors to the Emerald Isle hope to pick up the gift of Blarney, or the gift of the gab, if they pucker up and land a kiss on the stone lying high above the ground in the castle's tower.

Originally known as the Lia Fáil or the Stone of Destiny, the Blarney Stone's powers are said to have first been discovered by a witch. The stone dates back to the 12th century and some believe it to be the original Stone of Scone upon which the first King of the Scots was seated during his coronation. Legend has it that part of the stone was presented to the Lord of Blarney Castle, Cormac McCarthy, by Robert the Bruce in 1314. It was Bruce’s gift for the Irish support of the Scots during the Battle of Bannockburn.

History of the stone

Defending the history of the stone and its name as one of the must-see sights in Ireland, Blarney Castle owner Sir Charles Colthurst denied that you could catch anything from a quick kiss when the list was released.

I had the pleasure of kissing the very same rocky piece of Irish history myself last July. I can report that I did not grow a third ear or suddenly start jumping around the field like a mad human, but the thought crossed my mind – before I contorted myself upside down at the mercy of a strong Clare man who, I prayed, would not get sweaty palms – that this stone has seen a lot of action.

The thought also crossed my mind that I had just lined up for hours, and climbed up spiraling staircases, uncomfortably close to middle-aged posteriors that had no business wrapping themselves around the winding (and narrow) steps of Blarney Castle.  I would not (and could not – it’s all one way) turn back without getting some lip locking in with that stone.

So I got flipped over, closed my eyes, thought of mother Ireland and kissed it. It was cold, but not entirely unpleasant. I was pulled up, dizzy and red-faced, and stumbled back down the stairs to enjoy a light-headed walk around the gardens in the Castle grounds.

It might have been dirty, but I didn’t feel cheap after kissing the stone. In fact, I had a pretty good time, no strings attached. I hope the other 399,999 visitors from last year can say the same!

Other germy gems on TripAdvisor’s dirty little list include the Wall of Gum in Seattle, Oscar Wilde’s tomb in Paris (two Irish connections in the top five!), St. Mark’s Square in Venice, and the Forecourt of Grauman's Chinese Theater (Handprints and Footprints) in Hollywood, .

In 2010, Tripadvisor.com bestowed this dubious honor on one of Ireland’s top attractions by polling 4,600 travelers.