The second place winner in IrishCentral’s 'My First Trip to Ireland' story contest! 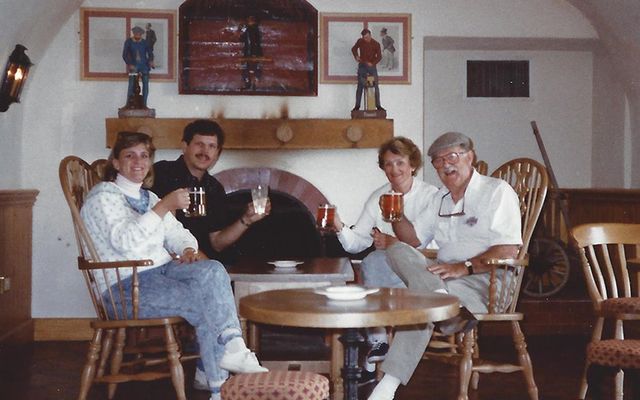 Pen-pals sharing a pint for the first time Ellen Blackstock

In January, we asked IrishCentral readers to submit stories about their first trips to Ireland, with the four runners-up being published in the days leading up to March 1, the start of Irish American heritage month, and the first-place winner receiving $300. We have been absolutely blown away by the submissions and have so loved hearing about the first time you set foot in Ireland. This is the story that snagged second place, out of 68 wonderful submissions. It’s a heart-warming testament to a friendship that spans decades, generations and the thousands of miles across the Atlantic.

I have been hearing about Ireland for most of my life. My grandparents were of Irish descent and, though not born there, my papa would tell us stories about the wee people. At age 13 I had the opportunity through school to pick a pen-pal for an assignment. I chose a girl from Northern Ireland named Aideen and that was the beginning of a lifelong friendship that has lasted almost 50 years.

We wrote on and off through high school and college and then sort of lost contact after marriage and busy lives of nursing and teaching careers and both having three children. I came across her letters when I was cleaning out a drawer and wrote a letter to her, sending it to her parents' house in the hopes they still lived there. They did and it was like we had never stopped writing.

In 1990, we decided to take our first trip to Ireland to meet them. My parents and my husband accompanied me and we were off. We never had spoken on the phone before the planning of this trip. When we talked to them on the phone it was not easy to understand their brogues and why they would be telling us to bring “jumpers” in July, only finding out later that “jumpers” were sweaters!

A newspaper article about Ellen's trip to Ireland

We had so much fun exploring a place I grew up hearing about. Her husband, Hugh, played guitar and sang great old Irish songs as well as the Beatles and other songs from our growing up. Her uncle was a Catholic priest and said mass in their “caravan” overlooking the Irish Sea.

We explored Northern Ireland, which is beautiful, seeing the Giant’s Causeway and going to another town nearby for a music festival where the people came out of the pubs and played in the streets. We also traveled with them across the border into Ireland, seeing the many castles and stopping in pubs for lunch and a pint and the Cliffs of Moher to just name a few.

We parted company and my husband and my parents went on to explore the Ring of Kerry and kissed the Blarney stone at the Blarney Castle. We met back up with them in Dublin and had a wonderful night out.  It was a magical trip and one I will never forget.

The families all together. Photo: Ellen Blackstock

We had our third child in 1992 and invited them to come to America to visit and be our daughter’s godparents. Again, a wonderful trip with 6 kids ranging in age from 8 weeks to 13 in two vans driving up and down the California coast. We went over 1500 miles.

Sixteen years later, when our daughter was 16 we went back to Ireland to meet her godparents again. Hugh, Aideen’s husband, had told us he did not want to wait until she was 18 to have her show up on their doorstep! So we made the trip with our daughter and it was like picking up where we had left off! We were able to pass on our love of Ireland to her.