I visited Ireland for the first time in 1957, when I was nine-years old (PHOTOS)

The fourth-place winning entry in IrishCentral's My First Trip to Ireland contest! 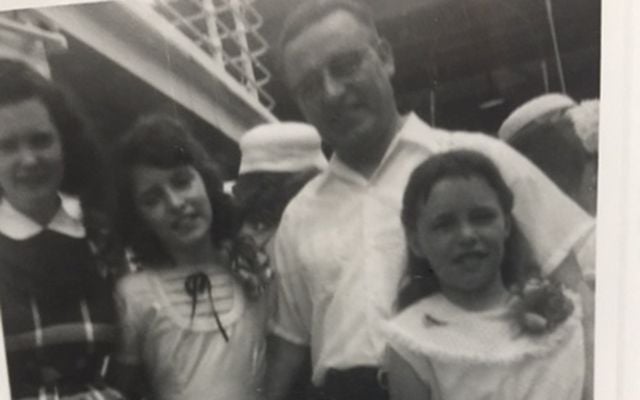 Setting foot on board the Scythia, the boat that would take us to Ireland, with my mom, dad and sister. Though my father, John Lyne, is in the picture, he stayed home. Someone had to work to pay for all this. Diane Gasparrini

In January, we asked IrishCentral readers to submit stories about their first trips to Ireland, with the four runner ups being published in the days leading up to March 1, the start of Irish American heritage month, and the first-place winner receiving $300. We have been absolutely blown away by the submissions and have so loved hearing about the first time you set foot in Ireland. This is the story that snagged fourth place, out of 68 wonderful submissions. We were positively enchanted by Diane's beautiful and vivid memories after 60 years.

In June of 1957 as we disembarked from the Scythia, in Cobh, my mother was a nervous wreck fussing with bags, papers and her two daughters, Helena 11 and me, 9. We were all excited about this trip, but my mother’s return to Ireland after twenty years was overwhelming.  We could feel her anxiety.  We took the train to Dublin, spent a night at the Gresham ( part of mom’s bucket list?), and hired a car to take seven suitcases, two trunks and the three of us to Bawnboy, Cavan.

Me entering The Scythia, the ship that would take us to Ireland. Photo: Diane Gasparrini

When we finally arrived at the gate of the farm, my grandmother, grandfather, Aunt Tessie and Uncle John Joe stood waiting. A very emotional scene followed. Though letters and gifts had been exchanged between Cavan and New York for years, nothing compared to the joy, tears and excitement of this reunion.

My grandfather in the field. Photo: Diane Gasparrini

Once we settled in, our family made us feel like part of the place and we stayed for ten weeks. They didn’t have electricity yet. All the neighbors on the road before them had to agree to it before my grandparents would be eligible, but the oil lamps provided much more atmosphere.  The adults had long, long conversations which Helena found fascinating. I, on the other hand, enjoyed my grandfather’s company, a man responsible for running a farm.  Anytime he went out the door, I followed. The hay had to be placed in mounds to dry and then stored. Each new activity was great fun until I grew tired and went back up to the house.

Later Helena and I would bring the tea and soda bread to my grandfather and John Joe, their only break.  John Joe, a very witty young man at the time kept us laughing all summer. Once Uncle Terence arrived, he and John Joe teased us endlessly and we loved it. If we weren’t working with them in the fields during the day, they were teaching us to be card sharks in the evening.

My uncles working in the field. Photo: Diane Gasparrini

My Aunt Tessie taught me to step dance that summer, the seven hand reel. I wasn’t very good but she encouraged me, nevertheless. We were bunk-mates and she very good naturedly put up with my childish antics. In Ireland at that time, none of the shops used the brown paper bags we had in NYC. Instead they wrapped most purchases with newspapers, a fabulous idea in my eyes. When I played store, one of my favorite past times, I took every newspaper available and began my imaginary game. By the time any adult entered the room, every movable item was covered in newspaper.

Most of my mother’s siblings returned home that summer, even though she was one of fifteen.  Uncle Cody and Aunt Nora lived nearby, but the rest had quite a distance to travel.  We were always awaiting the next arrival to round the bend. My Aunt Bridgie and Uncle Michael arrived with their three girls at the time. Aunt Kathleen was next and I was so proud to be with this beautiful woman in the royal blue suit who held my hand as we strolled through town.  Uncle Hugh, Aunt  Kitty, Aunt Nellie, Uncle Michael (there are three of them)  all came to see my mom. I have visited several times since but my first trip to Ireland told me about family.