A five-year-old boy has climbed The Sturrall, an extraordinary headland on the coastline of south-west Co Donegal. 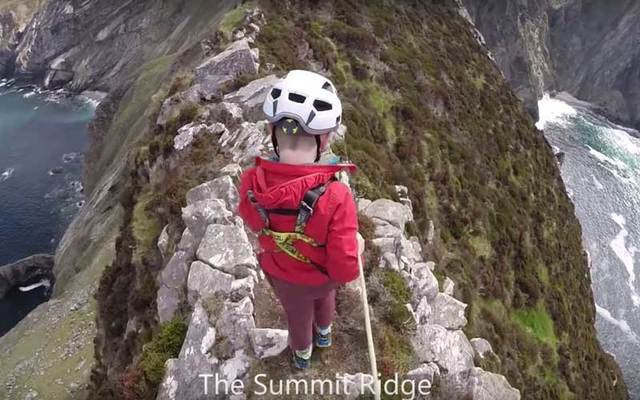 Luke Miller, 5, walks along the terrifying summit ridge of The Sturrall in Co. Donegal. YouTube/Iain Miller

A five-year-old boy has climbed The Sturrall, an extraordinary headland on the coastline of south-west Co Donegal. The narrow summit ridge, which is 800 meters long and rises well over 600 ft above the sea, is less than two feet wide in some places.

Luke Miller, whose dad Iain runs the Unique Ascent adventure company, saw a YouTube video of the sea stack and told him he wanted to climb it.

Iain said he had to think long and hard about it but decided they’d go for it together, the Irish Mirror reports.

Wearing a safety harness and helmet and accompanied by his dad, little Luke was ready for the challenge.

Iain said: "For the past few months he has climbed several sea cliffs around Cruit Island and he has been to the big new indoor wall at the Foyle Arena in Derry.

"We waited for blue sky, sunshine, minimal wind and mum to be away to Dublin. Easter holidays from school and Luke and I headed to The Sturrall. The sea was too bouncy for a sea stack ascent so by default, the Sturrall was the winner.

“With the promise of a big box of lego the following day in Letterkenny and chocolate cake on the summit we headed off, " said the proud dad, reports BreakingNew.ie.

"Luke was a star performer walking the whole seven kilometre journey and was most definitely having fun on the steep ground.

"On the summit, he asked if it was lunchtime. The chocolate cake was the primary motivation to stand on the summit."

Read More: Irish boy thought to be the youngest person ever to climb African mountain