All the basics – and some fun facts – about County Westmeath. 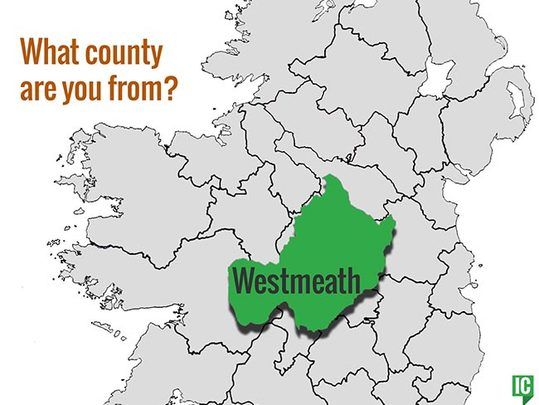 Irish Name:  An Iarmhí, meaning "west of the middle"

A brief history:  Westmeath was the meeting place of five ancient provinces in Ireland.

Crookedwood Fort is one of the oldest structures in the county. It is related to the old stories of Fionn, the mythological hunter and warrior or the druids. This are is also home to Church Taughmon, a 14th century stone church.

Uisneagh Hill is where King Tuathal Teachmar erected his palace in the early second century amd from here the pagan kings of Ireland ruled for 200 years.

There are many castles located within the county, but Tullynally is the most famous. Tullynally is a beautiful castle, nearly a quarter of a mile long, and is still a residence. The family of the Earl of Langford lives there. One of the oldest castles in the area is Delvin Castle, built in 1181 by Hugh De Lacy. Athlone Castle was built in 1210 for King John of England.

The town of Fore, is a medieval town containing a large moat from Anglo-Norman times, remnants of the ancient city walls and a Benedictine monastery that was in use until Henry VIII closed it in 1539. The monastery contains superior ancient artwork and crosses.

The county was officially established in 1543 and was named after the historic kingdom of Mide.

Key attractions: Athlone Castle, in Athlone town, dates from the 1100s. It was reopened in 2012 after a multi-million euro renovation to transform the castle into a state-of-the-art, multi-sensory visitor experience. It features eight newly designed exhibition spaces allowing visitors to pursue both a chronological and thematic sequence including 3D maps, audio-visual installations and illustrations.

Fore Abbey is the old Benedictine Abbey ruin, situated to the north of Lough Lene. Fore village is located within a valley between two hills – the Hill of Ben and the Hill of Houndslow – and the Anchorland rise area. Ruins of a Christian monastery, which had been populated at one time by French Benedictine monks from Évreux, Normandy, can be found there.

Mullaghmeen Forest is about 5 miles from the town of Castlepollard. The soil is very rich in limestone and in 1936 the Department of Agriculture decided that it would be ideal for the planting of deciduous trees. The department set about planting primarily beech trees, resulting in what is now the largest beech plantation in Europe. Mullaghmeen summit at 850 feet is the highest point in County Westmeath. It is the lowest county top, and is the 1,000th highest summit in Ireland.

Tullynally Castle is a country house a mile and a half from Castlepollard on the Coole village road. The Gothic style building has over 120 rooms and has been home to the Pakenham family (now the Earls of Longford) for over 350 years. The house is surrounded by 12 acres of gardens, including woodland gardens and walled gardens laid out in the early 19th century with a limestone grotto and ornamental lakes. Recently a Chinese garden has been added with a pagoda and a Tibetan garden of waterfalls and streams.