The Neolithic remains at the Céide Fields in Co Mayo have been preserved undisturbed for nearly 5,000 years. 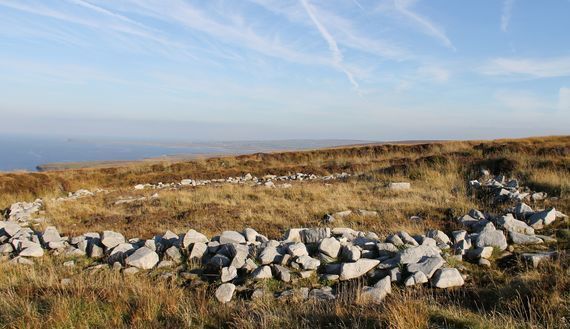 The Céide Fields is the world's most extensive Stone Age monument. Tourism Ireland

When one thinks of Stone Age archaeological sites, Stonehenge, Altamira, and Newgrange may come to mind. Most likely The Céide Fields will not. But it should.

*This article first appeared in the June/July 2006 issue of sister publication Irish America magazine. To enjoy more articles from their archives, click here.

My experience in archaeology lay with the ancient Mediterranean world — the colossal monuments of Greece and Rome. I had visited marble temples stretching into the sky and seen vast cities of intricate stone streets. The idea of ﬁeld walls did not conjure up images of importance or grandeur.

The Fields were not featured in a single book I had read nor were they covered in any class I had attended (not even “Neolithic and Bronze Age Farming Communities”). I was skeptical of what might be so signiﬁcant on the cliffs of Mayo. I shouldn’t have been.

For this is not just another archaeological monument or visitor center, it is the world’s most extensive Stone Age Monument — the remains of a highly skilled and organized agrarian Neolithic society, which has been preserved undisturbed for nearly 5,000 years.

Patrick Caulﬁeld, a local schoolteacher, ﬁrst discovered the site during the 1930s. While cutting peat bog for fuel, Patrick came across piles of dry-mortared stone stacks that he concluded were man-made and due to their location deep under the bog, ancient. Patrick’s son, Seamus, grew up to be an archaeologist, and it was he who began the ﬁrst true excavation of the Céide Fields in 1970. 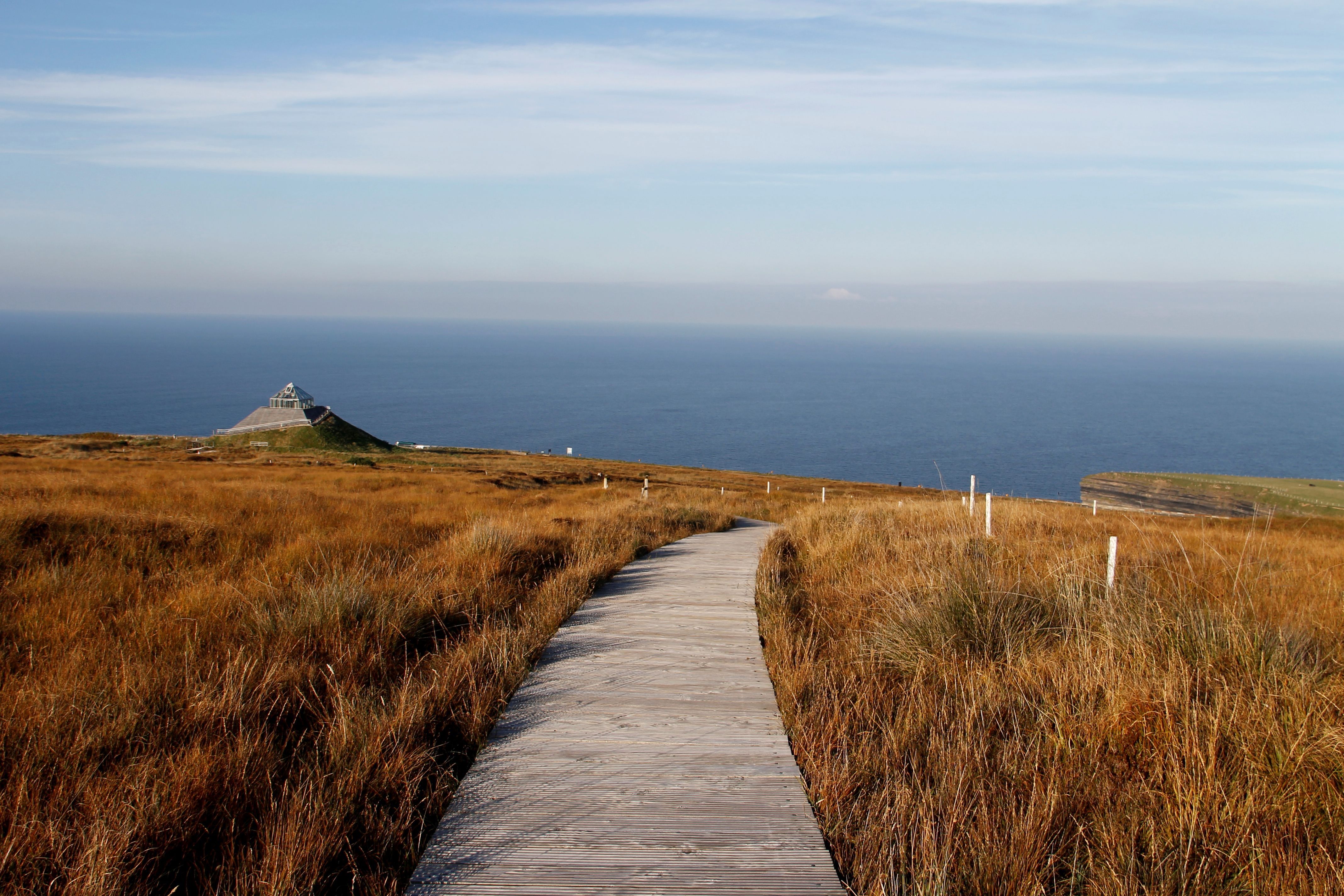 Through cross-comparison with pottery found in tombs and Neolithic sites in Western Europe, the Céide Fields’ shards, along with radiocarbon dating from the hearth, placed the occupancy of the enclosure at around 3000 B.C. A primitive plow head was also discovered within the enclosure, which gave additional evidence of animal husbandry, probably cattle, as the horse was not yet introduced to Ireland.

Much of the rest of the site remains underneath the bog. The Céide Fields workers rely on probing, an inventive yet rudimentary way of mapping the site adapted from a traditional practice of ﬁnding ancient trees deep beneath the bog. An archaeologist (or like-minded volunteer) pushes an iron rod down into the bog until met with resistance such as a stone wall. The wall position is then marked and followed in its presumed direction, much like a game of Battleship. In this way, the main plan of the Céide Fields has been discerned. A number of sectional cuts have also been made into the bog, unearthing segments of these stone walls. Primarily, this has been done for the beneﬁt of the visitors. Interestingly, the bog is already reclaiming these sections.

The Céide Fields, as understood today, is a network of parallel stone enclosures with a number of those walls running up to two kilometers in length. The site has been mapped up to ten square kilometers or four square miles but it is clear that the site is much more expansive than these numbers suggest. Although there is one known domestic structure (Seamus’ oval enclosure) found, there must be others.

The sheer scale of the site is an indication of the size of the population and the degree of organization that it would have taken to construct such ﬁelds. The area, at the time of the stone enclosures’ construction, was a dense primeval forest ﬁlled with animals that today can only be found in Ireland’s museums, including wolves, brown bears and boars. To clear this landscape for agriculture, let alone move the over a quarter of a million stones used for the enclosures, would have taken a great deal of cooperation from a sizable community. This society would also have to have had a source of food production independent of these new ﬁelds and independent of the population working on them.

No evidence has yet been found of any fortiﬁcations at the Céide Fields. This has prompted many into believing that this agrarian society lived peacefully without the thought or threat of war. Although this is a tempting and agreeable hypothesis, it is argued from a position of lack of evidence rather than proof positive.

The Céide Fields’ society did not live in isolation. We know that the population participated in trade and therefore certainly had contact with various other peoples, as evidenced from a number of ﬂint and Porcellanite (used for stone axes) ﬁnds from County Antrim in the north. It is certainly possible that their interaction with neighboring groups was completely peaceful, but it is unlikely. Just because defensive structures, such as protective walls (which would be larger and thicker than the farming walls) and tower foundations, have not been uncovered is not reason enough to presume that they do not exist. The Céide Fields is such an expansive site that these structures could lie undiscovered deep beneath the bog miles away.

What ﬁrst enabled the bog to grow in this region is debatable. Some believe that it was a change in climate or a high amount of rainfall that eroded the soil’s nutrients enabling the growth of bog-forming plants which require minimum sustenance and thrive in saturated conditions. Others feel it was the human impact on the forested environment that permitted the necessary conditions for the bog. It is likely that a combination of both climate and human intervention caused the optimal environment for the blanket bog to develop.

The lands around Ballycastle and to the east, along Killala Bay, were not affected by the rising bog, and it is likely that many of the Céide Fields’ inhabitants relocated not far from the area.

Today, the Céide Fields is much more than an archaeological site. In 1989, Dr. Seamus Caulﬁeld and Professor Martin Downes began the project for the Céide Fields Visitor Centre. The Ofﬁce of Public Works (OPW) of Ireland designed the award-winning center and it was opened in 1993. Interestingly, the Mayo 5,000, celebrating the 5,000 years of the Céide Fields' existence and the center’s grand opening, featured a ﬂedgling performer by the name of Michael Flatley. It was this festival that catapulted him into the spotlight and it was all because of the Céide Fields.

The center cuts an imposing outline rising as a pyramid from the landscape of the bog. The building is almost seamlessly built into the sensitive environment. According to the OPW, the building and all of its aspects are a “metaphor for the layers of history of man and the landscape in time, which is the subject matter of the exhibition.”

The architects stipulated the use of natural durable materials for its construction. The interior of the building is composed of oak, sandstone, and glass, with the materials becoming lighter in color as one approaches the glass-peaked observation tower. The center blends so well into its landscape that when approached from a distance the building is easily mistaken as another summit in the nearby island grouping, the Stags of Broadhaven.

The center houses exhibits on not only the site’s human history but also its rich geological and botanical records. The focal point is the 4,300-year-old Scots Pine tree trunk that was preserved by the bog. 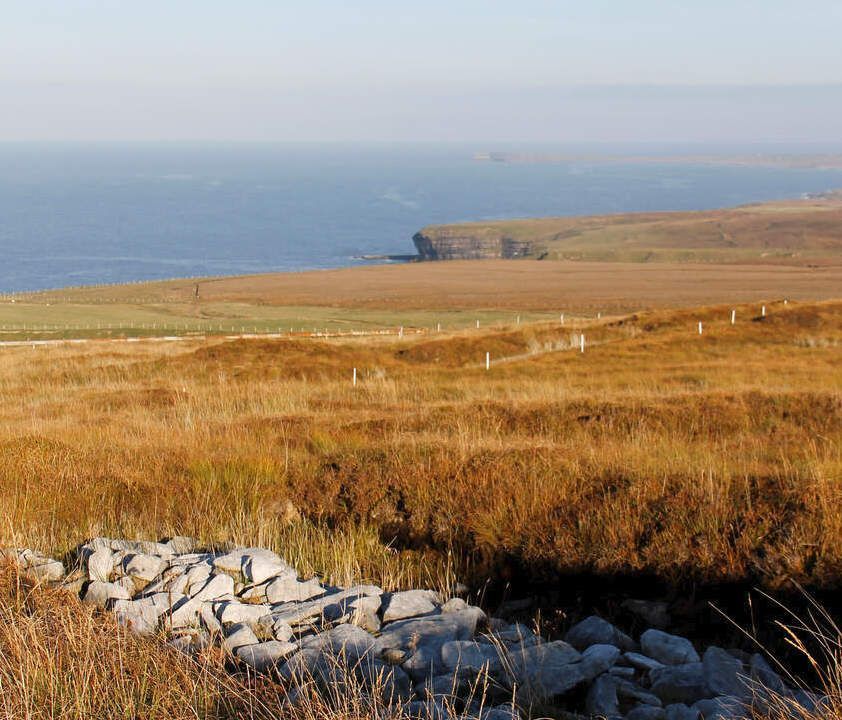 The geology of the area adds to the site’s beauty. The Céide Cliffs (on which the Céide Fields rest) are over 300 million years old and rise up to 370 feet above sea level. These horizontal limestone and shale cliffs, although not quite as large as the Cliffs of Moher in County Clare, are certainly as awe-inspiring with much less of a crowd.

The Céide Fields staff is impressive. I arrived in the midst of the winter holidays, the most inconvenient time of the year to be given a personal tour, as the visitor center is closed during this season. Gretta Byrne, a Céide Fields archaeologist, took time out of her holiday to brave the roads from Dublin and meet me there. It was Ms. Byrne who brought the Céide Fields’ history to life. She patiently answered all questions and was enthusiastic about the ﬁeld’s archaeology and preservation.

At the Céide Fields, there is something of interest for everyone, be it history, botany, geology, award-winning architecture, or the center’s tearoom. It is a great experience in a wonderful setting.

And if you go in the summer there are beautiful wildﬂowers and, I hear, a bit of sunshine.