Following changes to J-1 visa Irish students get to work at finding employment before they fly. 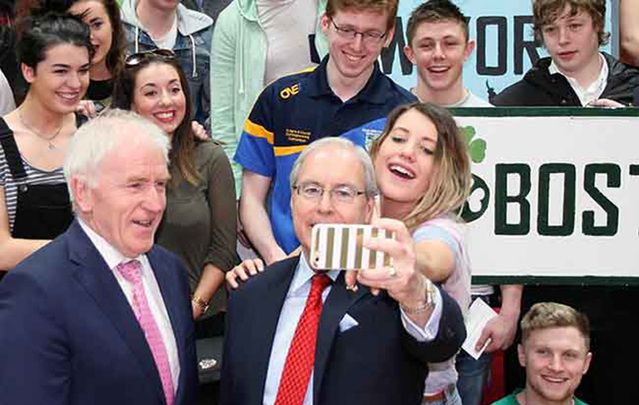 Ireland’s Minister for the Diaspora Jimmy Deenihan and the US Ambassador to Ireland Kevin O’Malley take a self with this year's J-1 students at UCD. US Embassy

Some of the biggest employers in the United States met with Irish students hoping to take part in the J-1 visa adventure this summer. The hiring fair in Dublin, attended by the US Ambassador to Ireland Kevin O’Malley, was organized to enable students to meet the new stipulation for J-1 visas that they must find a job before they arrive in the US.

Fourteen employers set up stalls at the Dublin Convention Centre with 280 positions to be filled for summer 2016. Among the US companies were Wonderworks from Myrtle Beach, SC; Blazing Saddles Bike Rentals and Tours from New York and San Francisco; Hyatt Regency Mission Bay Spa & Marina from San Diego; Wequassett Resort & Golf Club from Cape Cod and many more.

Despite the new rules for J-1 students, USIT (a student travel agency) reported they had received double the typical number of inquiries into the summer working holiday.

Just some of the first USIT J1ers who have been hired at the Fair in Dublin today #J1JobSorted pic.twitter.com/KBKiwMSHzC

Speaking at the fair US Ambassador O’Malley delighted in the fact that the J-1 visa continues to be so popular, allows Irish students to experience American culture first-hand and strengthens the bond between the US and Ireland.

He said “This is a program where people have a chance to really find out about themselves as they’re away from home.

“It’s really a cornerstone of the wonderful relationship between the United States and Ireland that has existed over these 50 years of this program, where so many Irish students have come to the US and establish life-long friendships and a pattern of respect for the United States.

“That’s why you have so many employers who have traveled over the ocean to come here to interview young Irish students.”

Irish students lined up, with resumes in hand, wearing their interview clothes and eager to impress. However, not everyone will have gone home with a job offer.

Dearbhla O’Brien, Managing Director of USIT, insisted that students who didn’t get a job offer should not be disheartened.

She told the Irish Times, “There’s just so many other employers that we have, we’re literally hiring every day of the week.

“Students can come into us and they do a Skype interview – we arrange it. There’s loads more out there.”

Although she insists there are still plenty of job opportunities out there she did urge students to “get the ball rolling” by early March. She also recommended that students think of traveling to the less popular states.

O’Brien said, “We like to see them spread out a bit. It’s good for them to actually get immersed with Americans and not stay with their friends all the time.”

Mark MacNamara, a final year student at Limerick Institute of Technology, bagged a summer job working as a laser tag assistant at the Wonderworks amusement park in Myrtle Beach in South Carolina.

He told the Irish Times the interview “was very relaxed, they made you feel very comfortable. We were asked to explain where we’re from, if we could have dinner with one person who would it be and what would we do, and just explained a bit about the place and asked us which position we’d like to apply for.”

“I just want to work and travel, experience a different culture. Go over and see how I get on my own.”

For more information on the J-1 experience and finding a job in advance of travel visit www.j1online.ie or search #J1jobsorted.