Want to walk on water? Head to this new Leitrim floating boardwalk

Part of the Shannon Blueway, the 600m boardwalk will link Drumshanbo and Carrick-on-Shannon, with 160m of the walkway floating over the water of Acres Lake. 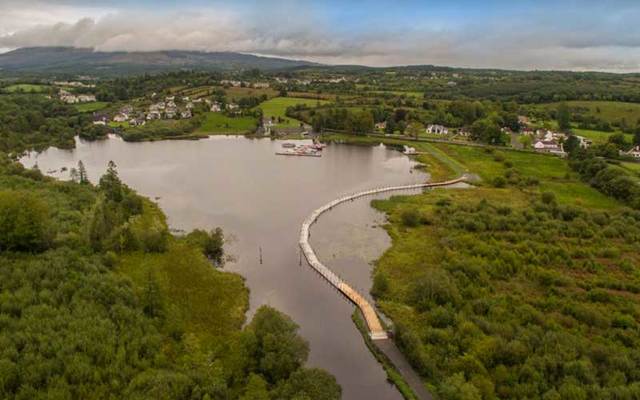 The first floating boardwalk in Ireland has opened at Acres Lake in Drumshanbo, Co Leitrim.

The 600m boardwalk will link Drumshanbo and Carrick-on-Shannon and will serve as the final leg of the Shannon Blueway. The Blueways are networks of both on-water and land-based recreational trails offering scenic walking, kayaking, and cycling routes into rural parts of Ireland.

The three blueways include the Royal Canal Blueway, Shannon-Erne Blueway and Shannon Blueway through Leitrim and Roscommon.

The Shannon Blueway, which boasts more than 200km of waterside trails, links to the river Boyle near Carrick-on-Shannon, providing access to Lough Key, as well as Boyle in Co Roscommon via Boyle Harbour.

The Shannon Blueway Boardwalk has been partly constructed on land, but 160 meters of it extends over the water of Acres Lake.

The floating boardwalk will allow access to Acres Lake and via the Lough Allen Canal northwards to Lough Allen and southwards to Battlebridge, Leitrim village and Carrick-on-Shannon, and farther south, The Irish Times reports.

The boardwalk, which opened on Tuesday, Sept 5, was installed by Waterways Ireland and cost €500,000 (approx. $601,768), the Irish Independent reports. Minister for Rural and Community Development Michael Ring launched the boardwalk on Tuesday, calling it “an excellent investment.”

Another €1.1 million ($1.32m) had been allocated to Leitrim County Council for a walkway and cycleway from Carrick-on-Shannon to Leitrim village, and from Acres Lake to the Lough Allen Hotel.