Stunning photos of the Kingdom that is Kerry 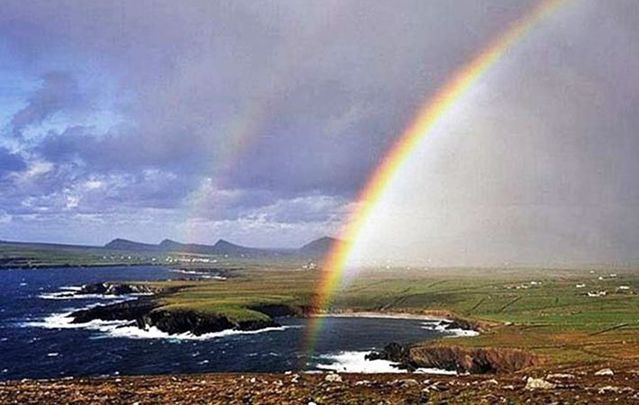 Of course, we’re biased but don’t take our word for it. The world famous Lonely Planet guide says “Kerry's exquisite beauty makes it one of Ireland's most popular tourist destinations. But if you need to escape from the crowds, there's always a mountain pass, an isolated cove or an untrodden trail to discover.”

That’s certainly true. The two photos Maurice Brick sent us of Kerry, which were sent to him by friends, inspired us to put together a collection of some beautiful Kerry scenes.

In the photo above Brick's friend has managed to capture a very rare phenomenon, a double rainbow. A stunning otherworldly shot it shows the beauty of Dingle at its best.

He also sent this amazing shot of a cross covered in ice at the top of Mount Brandon. Although Ireland's weather is usually rather temperate this shot looks like it could have been snapped in the Arctic north.

Mount Brandon is the highest peak on the unnamed central mountain range of the Dingle Peninsula. Named after Saint Brendan, it is a popular Catholic pilgrimage. The path to the peak is marked by small white crosses and this large metal cross stands at the top.

The rolling hills, above, run down towards Kenmare Bay, where the Kenmare River enters the sea at the junction of the Iveragh Peninsula and the Beara Peninsula. It is also located near the Macgillycuddy's Reeks, Mangerton Mountain, and Caha Mountains and is a popular hill walking destination.

This bridge and stream at Killarney National Park is just a snapshot of the beauty to be found at Ireland's first park of its kind, founded in 1932. The park covers 102.89 km2 (25,425 acres) encompassing diverse ecology, including the Lakes of Killarney (see the photo below), oak and yew woodlands of international importance, and mountain peaks.

It has Ireland's only native herd of red deer and the most extensive covering of native forest remaining in Ireland.

Above is Minard Castle, in Lispole, on the Dingle Peninsula. This is one of three mid-16th century Fitzgerald castles built in the area. The beach photographed in the foreground is considered one of the finest storm beaches in Ireland.

The castle's strength was demonstrated when in 1650 Cromwell's Army detonated charges at each of its corners yet the castle still stood. Sadly all the occupants of the castle were subsequently killed and the structural damage done made the building uninhabitable.

Cromwell Lighthouse, on Valentia Island, is a stunning spot. Located on an island with a population of just 665 people the lighthouse was built on the site of a Cromwell Feetwood Fort. It's believed to date from the 16th century. The outline of the Cromwell Point fort with its bastions and barrack inside its wall can still be easily traced from the air, lying just inside the lighthouse enclosure wall.

This fairy tale photo is of Portmagee located on the Iveragh peninsula south of Valentia Island. Its name in Irish "An Caladh" means "the ferry", referring to the fact that it was a crossing point for Valentia Island.