This starling murmuration video in Ireland is amazing as thousands of the bird flock together to fly in escape of a falcon attack. 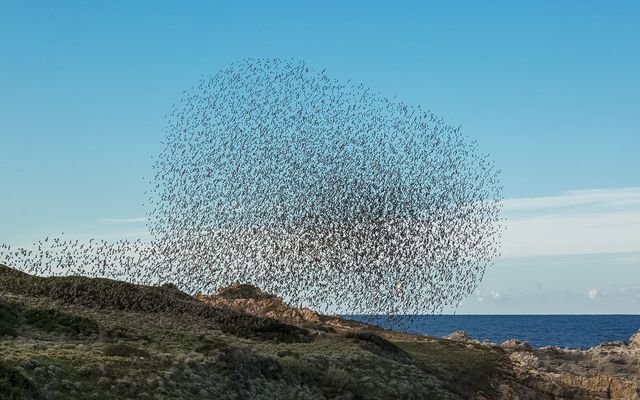 This starling murmuration video in Ireland is amazing, as thousands of the bird flock together to fly in escape of a falcon attack. iStock

This starling murmuration video in Ireland will have you in complete awe of nature.

Crowds are flocking to Timoleague, Co. Cork, to witness amazing starling murmurations in person after several videos of the birds’ mesmerizing dance went viral over the past week. Over 150,000 people have viewed an astounding video of a peregrine falcon going on the attack against thousands of starlings, who fly in magical, easily-synced patterns to ward off the hunting bird.

Captured by the Birdwatch Ireland West Cork Branch, fans of the videos are beginning to make their way out to the site in the evening time to see for themselves the incredible force of nature that is the starling murmuration.

BEST EVER MURMURATION UPDATE 13.1.18. Birds gathered over us at 16.50. At 17.10. The Peregrine arrived. It can be seen in this video, unable to make a kill. All this happened above my head. Lucky 7 of us who saw it. See you tomorrow. To use this video in a commercial player or in broadcasts, please email licensing@storyful.com

A murmuration is the name given to the manner in which starlings fly in formation in a way that creates a daunting, yet fascinating, cloud of birds, looping, spiraling and alternating around each other in the most remarkable seamless way. It is believed to be both a way for starlings to fend off hunting birds, such as the falcon in the video above, but also a way to keep warm in Ireland where they have traveled in large numbers over the past two months.

Looking like the movement of a single body, it’s hard to believe that there could be as many as 10,000 starlings involved in these remarkable phenomenon, moving so easily around each other as if they had been practicing the same routine all of their lives.

According to anthropologist Barbara King, however, the bobbing and weaving around each other is accomplished with very minimal effort by the birds, who complete their murmurations without a single leader. Instead, each bird reacts around the movement of the five or six birds immediately around them to create this incredibly tight-knit and unpredictable confusion for any bird trying to hunt down one in their midst.

In fact, those watching the starlings in Co. Cork over the past few weeks believe that only one other bird so far has succeeded in picking off one of the murmuration company and that was by waiting for them to roost up for the night when they split off from the group.

“When it first started there was a sparrowhawk there and he tried to attack the murmuration and got nowhere but very cleverly, he realised that if he went and sat in the wood where they all roost, he could just grab one and he came flying past me against the sunset with a starling in his talons,” Peter Wolstenholme of the Birdwatch Ireland West Cork branch told the Irish Times.

Have you ever witnessed a starling murmuration?