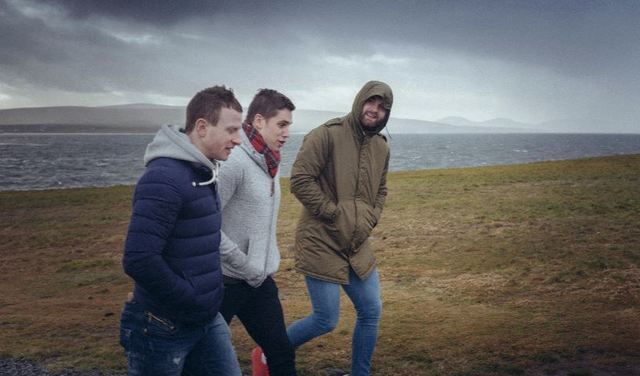 A new short film highlighting the beauty of the Wild Atlantic Way follows members of the Mayo GAA football team exploring some of its wonders.

‘It Changed Us’ captures the journey made by three current Mayo GAA footballers as they retrace one of their favorite memories while on a training camp with the county team in 2012. Aidan O’Shea, Lee Keegan and Colm Boyle explore the small coastal town of Belmullet in the north west of Mayo.

The trio are shown getting involved in the local community who helped them on their journey five years ago as they lend a hand at fishing, cooking and serving pints of the black stuff to the people of the town.

Robert Coyne of Mayo.ie, which released the video to promote the west of Ireland county, explained, “When we approached the guys to feature in the video, Belmullet was the place which jumped to their minds immediately. There is real community spirit in the area and that evidently resonated with Aidan, Lee and Colm. We knew the locals had to be involved in some way to capture what Belmullet and the north Mayo coastline means to the players.”

Belmullet was the setting for one of the team's most memorable training camps, an experience O’Shea said outranked any other and still resonates with him today, “As a team we usually go on a training camp once a year.

“Five years ago instead of going to their Spain’s or your Limerick’s, we went to Belmullet. And it was just such a massive kind of opening of our eyes to a county and how proud they are. It turned out to be probably the best thing to ever happen to us.”

Scott Marshall of Cut Media, a Glasgow production company which made the film on behalf of Mayo.ie, said that the passion on show from the people of Belmullet towards their county was quite amazing.

“It was amazing to witness the pride the local people showed to Aidan, Lee and Colm on our visit, and their passion for County Mayo itself. I can safely say the welcome we received is pretty unique to Mayo and this part of the world. That definitely comes through in the film.”

This film is the second of a five part series entitled ‘Wild Mayo’, which Mayo.ie hope will promote the county and encourage an increase in tourism. Tourism is a growing sector for the county, which consistently ranks highly in national visitor statistics.

The first film of the series, ‘Between the Wind and the Waves’ which told the story of Francois Colussi, a french kitesurfer who moved to Ireland 10 years ago to pursue his passion. That video can be seen here. Next up in the series tells the story of world triathlon medallist Con Doherty and how his native county helped shape him to achieve his goals.

The final two films in the series will be released before the end of 2017.

What is your favorite part of County Mayo?