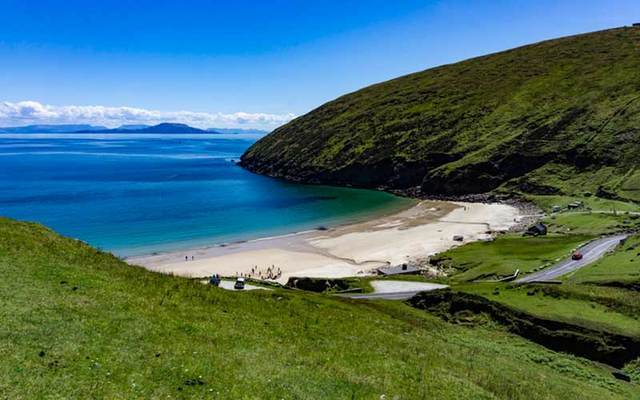 Lonely Planet has named Keem Bay on Achill Island as one of the best beaches in Europe.

The scenic Co Mayo beach has frequently been recognized as a favored travel hotspot in several "best of" lists in recent years. Last year, Keem Bay was voted Ireland’s favorite seaside resort in a poll from online lottery company Lottoland. It also ranked number 11 in 2019's list of the 50 Best Beaches in the World by Big 7 Travel.

Last month, a petition was launched protesting the proposed construction of a glass skywalk over the cliffs and the development of a pedestrian access trail on the beach. Protestors of the $4 million construction project say the structures would ruin the natural beauty of the beach.

Here's what Lonely Planet had to say about what makes Keem Bay one the most beautiful beach in Europe:

"Ireland’s Wild Atlantic Way hides a crock of gold when it comes dramatic coastlines – and nowhere more so than at gloriously remote Keem Bay at the far west of Achill Island. A precipitous coastal drive fires the appetite for proper wilderness – and here you have it.

"Bearing the brunt of stormy seas and the fickle whims of the Irish weather, this half-moon bay of golden sand spreads at the foot of steep cliffs and grassy slopes. Basking sharks can sometimes be sighted offshore."

Haukland Beach in Norway was ranked number one on the list, followed by Cala Goloritzè in Italy and West Beach in Scotland.

The full list of Lonely Planet's best beaches in Europe can be found here.