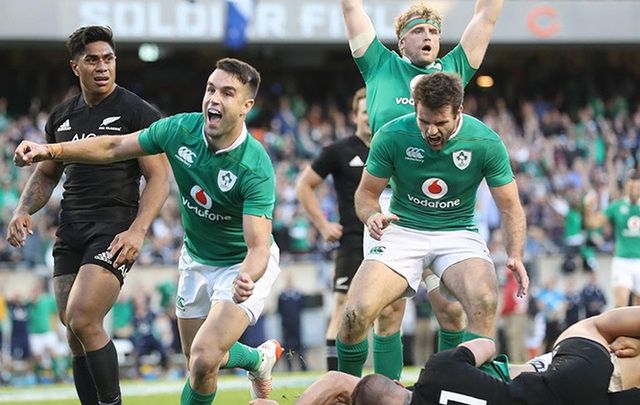 They're coming back! After the success of the Ireland v New Zealand match in Chicago the Irish team are set to return this summer. RTE

The Irish Rugby Football Union has confirmed that the Irish rugby team will play the USA Eagles at a summer test in New Jersey, on June 10. This news comes amid reports that Guinness Pro12 plans create a two-division Guinness Atlantic Rugby Championship in North America.

The Irish rugby squad will square off against the USA Eagles at the Red Bull Arena, in Harrison, New Jersey. However, huge crowds are expected due to the success of November 2016 game in Chicago when the Irish team beat the world record breakers the New Zealand All Blacks.

Last November the USA Eagles attracted a crowd of 18,007 to Toyota Park in Chicago, for a 54-7 defeat by the Maori All Blacks. The same weekend the Irish entertained a crowd of 62,300 at Chicago’s Soldier Field and defeated the All Blacks 40-29.

Here are the highlights from that game:

This June the Irish team will be left without players who have been called up the British and Irish Lions tour of New Zealand. However, it’s felt this should still leave a strong team for the friendly clash.

IRFU CEO Philip Browne said in a statement “It is great to be returning to the US this summer.

“The team received a fantastic reception in Chicago last November and USA Rugby provided great support on the ground.

"There are a lot of Ireland Rugby fans on the east coast of America and we hope that they will again come out in numbers to support the team in the Emirates Airlines Summer Series.  We are looking forward to taking on the Eagles in New Jersey in June."

Dan Payne, the Chief Executive of USA Rugby, told the Irish Times “We are very honored to be hosting Ireland. The value they provided to rugby history throughout the world and toward the growth and awareness of the game in our country this past November in Chicago was phenomenal.

“This match will not only give our men a world class opponent … but they’re also clearly a fan favorite in the United States. With 35 million Americans claiming Irish American heritage in our country, this match will be a strong fit on all levels.”

The USA Eagles game will be the Ireland squad’s first game of the summer tour. The team will then travel onwards to Japan to face the Cherry Blossoms in two Tests on June 17 and 24.

Also, on Tuesday the Guinness Pro12 announced plans to create a create a two-division Guinness Atlantic Rugby Championship in North America. Two franchises in Houston and Toronto, which are being considered for the new tournament format which could start from the 2018/2019 season.