People across Ireland came together today to pay their final respects to Jack Charlton, the beloved former manager of the Republic of Ireland's national football team. 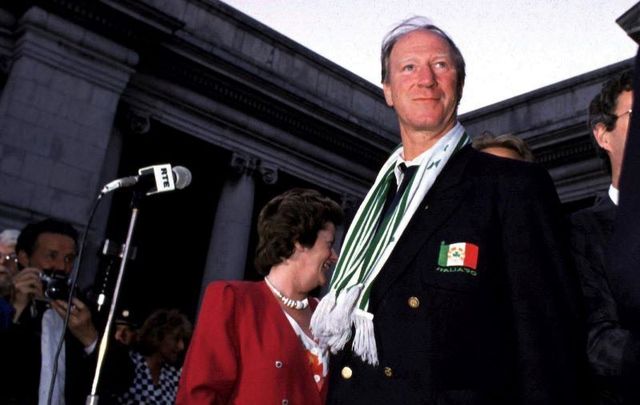 Jack Charlton's funeral was held in England today, but he was remembered all across Ireland as well

Jack Charlton, the beloved former manager of the Republic of Ireland’s national football team, was laid to rest in his native Ashington, Northumberland today, and fans across Ireland came together to pay their respects.

Charlton, who passed away on July 10 at the age of 85, was part of the England football team that won the 1966 World Cup. He later went on to manage the Republic of Ireland national team from 1986 to 1996, during which time he guided the team to its first-ever major tournament at Euro '88, as well as two World Cups, Italia '90 and the US '94.

Charlton was made an honorary Irish citizen in 1996. 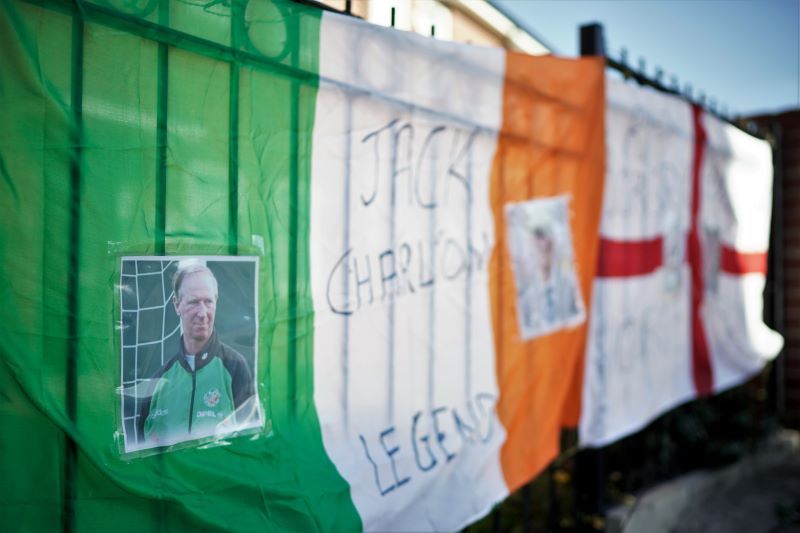 An Irish flag among the tributes to Jack Chartlon in Ashington on the day of his funeral, July 21, 2020. (Getty Images)

At his funeral on Tuesday, his grandchildren Emma, Kate, and Tom Wilkinson paid tribute to "a proud Englishman, a proud northerner and a proud honorary Irishman” during a eulogy.

Hundreds of people lined the streets in Ashington, Northumberland to see Charlton's funeral cortege, and in Ireland, the same respects were offered.

The National Flag at the home of the President of Ireland in Dublin was flown at half-mast “in honour of Jack Charlton to mark his funeral:”

The National Flag was flown at half-mast today at the home of the President of Ireland in honour of Jack Charlton to mark his funeral in Newcastle.
President Michael D. Higgins’ statement on the passing of Jack Charlton can be read here: https://t.co/ltKIIOOXTp pic.twitter.com/iKTY1usuRA

Similarly, the Irish embassy in the UK also flew its flags at half-mast on Tuesday:

To coincide with his funeral in Newcastle today, our Embassy flags are at half-mast in honour of the late Jack Charlton. A Leeds Utd legend, World Cup winner, manager of Ireland for a decade and honorary Irish citizen - ar dheis Dé go raibh a anam. pic.twitter.com/CFbZhtN9dH

In the Dáil Éireann, Irish politicians gave a round of applause to celebrate the "larger than life figure:"

"The son of a miner who's contribution was major. Lets rise and salute the late Jack Charlton" - Ceann Comhairle and Dáil Éireann Members rose to their feet and did so. Today family, friends & soccer fans from Ireland & the UK bid him a fond farewell. Suaimhneas Śíoraí Dó - RIP pic.twitter.com/VFxtxRI6r5

Radio stations across Ireland played “Put Them Under Pressure,” the official soundtrack for Ireland's Italia '90 campaign, at 12:30 local time, to coincide with Charlton’s funeral abroad.

The Football Association of Ireland shared this tribute on Tuesday:

The FAI said that fan groups You Boys in Green and the Confederation of Republic of Ireland Supporters Clubs have called on supporters to do their bit for charity in Jack’s honor.

YBIG are encouraging fans to donate to the Irish Cancer Society as they remember the glory days of Euro ’88, Italia ’90 and USA ’94, while the CRISC is supporting the Alzheimer Society of Ireland, their charity partner for 2020.

YBIG's Tony Considine told FAI: “These charities are both appropriate following Big Jack’s death and we are asking any fans who can to support them as we all remember Jack with so much fondness today.

“It is going be a sad day for Irish football but also a day filled with pride and if it will be a fitting tribute if we can help these two great causes as well.”

There were touching scenes in Ballina, Co Mayo where a new mural was unveiled in tribute to Charlton, who enjoyed fishing at the nearby River Moy:

And in Dublin, fans gathered at the Walkinstown Roundabout in scenes that mimicked the Italia '90 celebrations at the same location: