Only one man tried among Cork hurlers in Kilkenny defeat

Cork deserves absolutely no sympathy after slumping to defeat and exiting the All-Ireland hurling championship on Sunday. 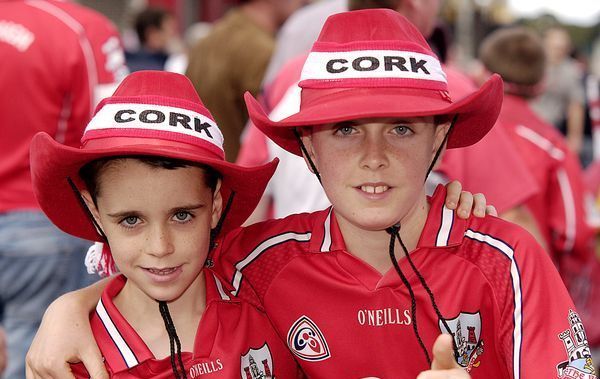 Cork Hurling fans (l-r) Shane (8) and Cian Murphy (12) ahead of Corks' All Ireland title clash with Kilkenny in 2006. RollingNews.ie

Cork deserves absolutely no sympathy after slumping to defeat and exiting the All-Ireland hurling championship on Sunday.

When you have one man on the field who scores a phenomenal 3-10, and 14 other men and a clatter of subs can’t finish the deal, then there’s a problem.

Patrick Horgan claimed the huge total for the Rebels who took a long breather in the third quarter (one point in 18 minutes) and never revived themselves. Kilkenny’s 2-27 to 3-18 win in Croke Park also means this is the first decade since the 1880s that Cork has failed to lift an All-Ireland title.

They were unlikely to do so this summer even if they had gone through against Brian Cody’s Cats, as the winner is due to bump into John Kiely’s reigning champs Limerick next month. But Cork was the team with the momentum, and Kilkenny had little or none after a dispiriting Leinster campaign. Guts told the story of the game.

Cork, when it mattered, was without any, whereas Cody and his backroom team may not have the most talented squad at their disposal but they never dodge a proper fight. For Cork, a whole fresh decade awaits them, and they will begin it with the indignity of concentrating on pulling their socks up.

Read more: GAA is the best salve of all