Guinness heap praise on the volunteers who keep local GAA going in a heartwarming, beautiful introduction to four people dedicated to their local GAA club. 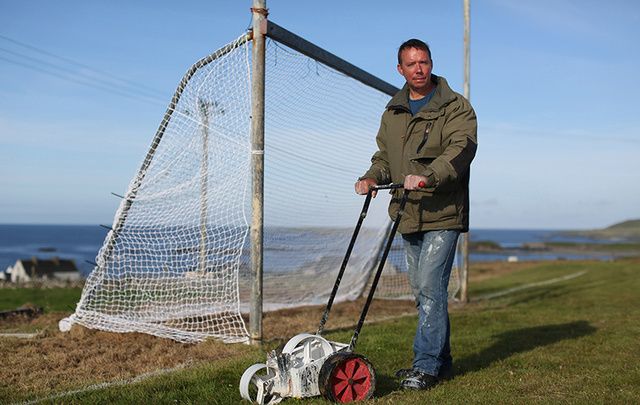 Simon Murray from Inishbofin, Co. Galway, is featured as one of the GAA's top volunteers. Guinness

As an amateur sport, the GAA would be nothing without those who dedicate their time and energy to their local clubs, simply for their love of the game. Yet while the incredible grit and determination of all those on the pitch are worth bucket loads of praise, we can’t forget the local people and volunteers who may not kit out on match day but who ensure that local clubs keep themselves going in many other ways.

A heartwarming new video from Guinness is celebrating just those people, remembering all the volunteers who fundraise, organize teams, cut the grass, hang up the goal nets, and everything in between that keeps a club in top shape.

As the GAA All-Ireland Senior Championships draws to a close, Guinness is celebrating the people “Behind Every Great Town” in a new campaign, remembering the local people who will give their time in communities across Ireland all year round.

The video meets with four real GAA volunteers from each of the four provinces, - Castlegregory, Co. Kerry, Inishbofin, Co. Galway, Slaughtneil, Co. Derry and Ongar, Dublin 15. Together, they represent the thousands of people throughout the Island of Ireland who find enrichment, enjoyment and a sense of community by immersing themselves in their local GAA club.

The ad opens with life-long volunteer Maurice Spillane from Kerry, fifty years a volunteer, who took on the role of Chairman of Castlegregory GAA Club at the age of 23. Maurice has, in his own words, "been knee deep in it ever since".

The viewer is then transported to Galway’s Inishbofin, where Islander, Simon Murray, and those before him have a dedication and conviction to succeed, having been affected by the people leaving their neighboring island Inishark in 1960. Although the island does not have a club team that regularly plays in competition, their GAA pitch is a physical symbol of their identity.

From there, we see a glimpse into the world of Wendy McEldowney and other volunteers from Slaughtneil, Co. Derry, one of Ireland’s most remarkable GAA communities. Only founded in 1953, the Robert Emmets GAA club is the epicenter of community life and has helped to unite and grow the parish.

The film ends with Moses Wanjigo, originally from Kenya, who came to live in Ireland in 2010. Responding to an advertisement from the Erin Go Bragh GAA Club who was looking new members to join, Moses was welcomed by the club with open arms and he quickly found a way to integrate into the local community.

It’s overall an absolutely stellar reminder of the community spirit behind the GAA and the passion that keeps our local football and hurling clubs running.