WATCH: This American’s reaction to hurling and camogie is the funniest thing online this week

American comedian Josh Pray learned all about GAA this week, and his reaction videos were priceless. 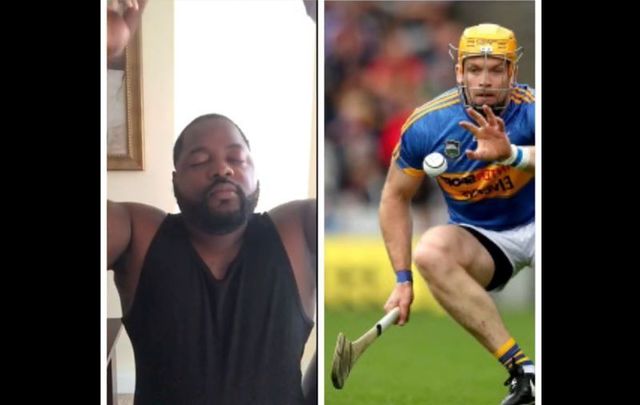 American Josh Pray learns all about hurling and camogie and his reactions are priceless. Josh Pray, Facebook

Josh Pray learns all about hurling and camogie, and his reactions are priceless

Josh Pray, an American comedian with more than a million fans over on Facebook, learned all about GAA sports hurling and camogie this week and shared his reactions in two hilarious videos.

In a video entitled “I AM NOT TOUGH ENOUGH TO PLAY HURLING" that he shared on July 16, Josh Pray explains that a fan told him he needed to check out hurling.

I AM NOT TOUGH ENOUGH TO PLAY HURLING

His hilarious reaction video quickly went viral amongst Irish and Irish American circles and has racked up more than 1 million views.

In it, Josh says: “First let me apologize to every Irish person I thought all y’all do is throw a few back, drink a little bit, have the reddish-red hair, and talk with a dope Irish accent. Bro, these Irish men are moving like FAST.”

"Like, they could get a speeding ticket with their feet!"

(It’s not called the fastest game on grass for no reason, Josh!)

Josh says he’d “rather go eat a bed of nails on the back of a shark in the middle of a swamp on the planet nowhere” than to get in the goal at a hurling match.

“I just do not have the testicular fortitude," he says.

Josh concludes: “Listen, I am all for bringing the world closer together, I am all for Americans needing to try new things, like rugby is on our radar … y’all keep hurling over there.”

But - poor ol’ Josh hadn’t seen everything yet. After his hurling video went viral, there were plenty of calls for him to check out what the female equivalent to hurling in Ireland, camogie.

Needless to say, Josh was just as, if not more so, dumbfounded with camogie as he was with hurling.

On July 18, Josh posted his camogie reaction video entitled “Camogie is Played by The Goddesses of the earth,” which of course is a title we fully support.

Camogie is Played by The Goddesses of the earth

“I am trying to describe the magnitude of what I just found,” Josh says, exasperated.

“I want every Irish folk tale that was told to me to be eliminated, they LIED to me in elementary school. ‘Josh, you see that rainbow? At the end of that rainbow is a pot of gold with a leprechaun!’”

“NO,” says Josh, “at the end of that rainbow is a woman in front of the pot of gold holding a sliotar or a hurley.”

“I did not know the women were this cold when it came to this sport, man. America, we have to catch up.”

Read More: PICS: Is this the worst GAA hurling injury you’ve ever seen?

Josh closes out his video vowing to get to Ireland to watch a hurling and camogie match in person. We just hope he brings his camera along to capture his priceless reaction!