'Two Hours from London,' a 1968 travelogue about Derry produced by Terence McDonald and John Hume, is now available on the Irish Film Institute's IFI Player. 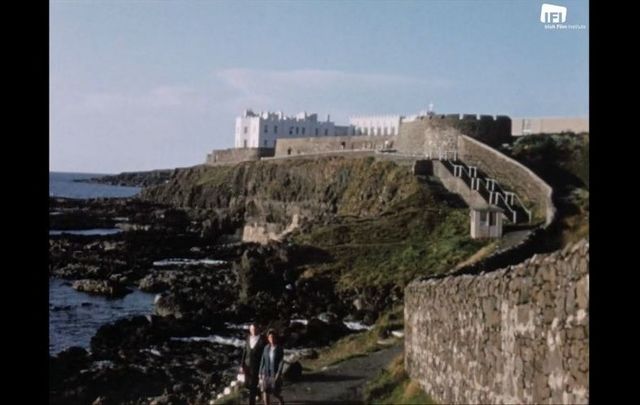 Producers Terence McDonald and John Hume highlight the sights and sounds of Derry in "Two Hours from London," the 1968 travelogue aimed specifically at air travelers flying from London that is now available from the Irish Film Institute.

Starting in the city, the camera takes in the Georgian architecture and famous city walls, still standing after three sieges. Rural tranquillity can be found a stone’s throw away and visitors may enjoy the pleasures of the seaside and a spot of sea fishing.

The diverse local cultural heritage is illustrated with extended scenes of traditional Irish music and dance and a Loyalist musical parade. Foreign visitors speaking to camera recommend Derry to the viewers, praising the beautiful scenery and friendly people.

Made by the Derry Economic Standing Committee, with funding from Derry Corporation and Londonderry Port & Harbour Commissioners, among others, who would support another McDonald and Hume’s project from the same year – The City of Londonderry.

This film is part of The Terence McDonald Collection. To watch more of the collection, click here.

About The Terence McDonald Collection at the Irish Film Institute

Born in the city of Derry in 1926, the films he made during his lifetime are diverse in genre and subject. They range from short comedies and experimental films to expository documentaries covering topics such as traveling and cross-community theatre, mental health services, and films that promoted Derry as a developing city looking hopefully to the future.

His work includes personal projects and films commissioned or supported by a range of public bodies. Terence produced his films under the ‘Fairview Films’ banner, a title derived from the name of the family home in Rosemount Avenue, and somewhat intentionally misleading as he alone undertook all aspects of the work.

With a deep understanding of all aspects of production – his credits include cinematographer, editor, sound recordist, producer, and director – along with a wide knowledge of cinema, McDonald created visually sophisticated and culturally rich work.

McDonald’s work has a notable sense of place. It not only represents the natural beauty of Northern Ireland but captures the various sides of his hometown of Derry through filmic portraits of the city, from the Georgian architecture and thrice–sieged city walls to the growing facilities and industries of the ‘60s. His two homages to the silent comedy era, The Fugitive and The Man from A.U.N.T., offered local audiences the opportunity to see their home on the big screen (perhaps for the first time) as the backdrop to slapstick capers making full use of the city’s walls and hilly streets.

McDonald had several frequent collaborators. Fellow Derry native and former schoolteacher, future Nobel Peace Prize winner John Hume worked with McDonald on several projects promoting the region to potential donors and international tourists, starting with A City Solitary in 1963 and the subsequent The City of Londonderry and Two Hours from London, which all depict an optimism about the prospects for the divided city.

Fr Cyril Farrell, prior of the Benburb monastery, was involved in several of McDonald’s more spiritual pieces, writing Christ-like fable The Secret as well as the cross-community play The Story of Man captured in the documentary Benburb.

Another writer who penned several scripts for McDonald was Gerry Wills, who wrote McDonald’s internationally successful Nebelung, as well as lending his voice to narrate documentaries Ballinascreen and The Portable Theatre. Northern Irish folk singer Gemma Hasson features in the scores of The Stones Will Speak, Long Hard Road, The Secret, and Requiem for Sally.

The Terence McDonald Collection is held and preserved by the IFI Irish Film Archive and these films are made available by the kind permission of Peter McDonald and Northern Ireland Screen.

“Two Hours from London" is published here with thanks to the Irish Film Institute (IFI), who IrishCentral have partnered up with throughout 2021 to bring you a taste of what their remarkable collection entails. You can find all IrishCentral articles and videos from the IFI here.