Tory Island: A rugged beauty with a pirate past

The people of Tory have a will to survive – it’s in the genes. 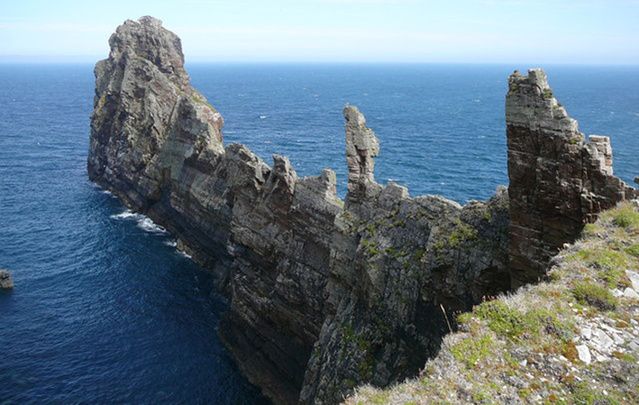 This spectacular blade of rock thrusts out into the Atlantic at the north eastern corner of Tory Island and reaches almost 80 metres high. Geograph.co.uk/WikiCommons

The remotest of Ireland’s inhabited islands, Tory Island, has Neolithic and Bronze Age roots and a fascinating mythology all its own. But for the past several decades the island has been feeling its way into the Big World, venturing into new, uncharted waters: it’s become a tourist destination and home to an indigenous artist colony.

Year-round ferries from Bunbeg and Magheroarty in Co. Donegal carry tourists and islanders to and fro, barring occasional interruptions from “perfect” and imperfect storms. A helicopter from Falcarragh sets down on a makeshift island pad every other week. Tory is still Irish-speaking – natives there speak a dialectal variant of Ulster Irish – but the island is not just another Gaeltacht gem. It’s a rich repository of Irish culture, an archaeological and anthropological treasure.

Tory Islanders, like islanders elsewhere, are resilient and fiercely independent. Patsy Dan Rodgers is the current King of Tory, a position that may, in fact, be a latter-day holdover from the age of the Gaelic chieftains and brehons. (The office is not hereditary, it’s kingship by consensus).

In addition to being island spokesman, Patsy Dan is an affable “man for all seasons”: painter, musician, storyteller, fisherman, and guide. He welcomes visitors to his island, referring to mainland Ireland as “the country.”

“Always a pleasure to welcome people from the country here,” he says.

Islanders heading to the mainland for the day, talk of “going to Ireland,” and Maire Clar McMahon, an Island teacher, tells of a youngster who when asked to describe Ireland wrote, “Ireland’s a large island off the coast of Tory.” And, in a way, that’s how Tory people see themselves.

Nearly three miles long and a little over a half-mile wide, Tory has a population of about two hundred, depending on the season or who is asked. In pre-Famine times there were perhaps as many as four-to-five hundred living in three or four clachans, distinctly Irish cottage clusters appropriately named East Town, West Town, Middle Town, and New Town. By 2002, the population had declined and was concentrated in An Baile Thiar (West Town) and An Baile Thoir (East Town).

In ancient times, West of Ireland islanders, and Tory Islanders in particular, were typecast as wicked Formorian pirates, as smugglers and thieves living by stealth and the law of wrack. Though the island likely takes its name from the high torrs at its Northeast corner or from túr rí, “the king’s tower,” in Irish, the word toraigh means “robber” or “bandit.”

Read more: Really get away from it all with an Irish island vacation (PHOTOS)

Not only that, but T.W. Rolleston, in his once popular "Myths and Legends of the Celts," tells us: “The stronghold of Formorian power was Tory Island, which uplifts its wild cliffs and precipices in the Atlantic off the coast of Donegal – a fit home for this race of misery and horror.”

The text goes on to describe Islanders as “huge, misshapen, violent and cruel.” But that is, of course, pure fiction – legend and invention.

A Rich Mythology and a Modern Day Saint

The island’s landscape is steeped in mythology and folklore. It is said that Balor of the Evil Eye, a mythical Cyclopsean giant and demon deity of darkness, made Tory his island and Tor Mor, a tower on Tory, his fortress.

That mythological tale, preserved as it is in living folklore, has many variations, and Islanders have been known to regale visitors with Balor stories and tales from the Celtic myth-cycle, pausing dramatically to gesture towards Tor Mor or Balor’s Fort or stone effigies of Balor’s soldiers in nearby rock formations.

Those telling the story may sometimes even suggest that the old gods may not be dead, just napping. Storytelling is, after all, high art on Tory.

Since Old Balor’s day, a lot has happened on the island. It’s said St. Colmcille himself established the mid-sixth-century monastery that dominated Tory life for more than a millennium and served as an important house in the Columban church. There’s little physical evidence of the monastic foundation now, other than the ruin of a sixth or seventh-century bell tower, outlines of chapels and oratories, and the symbolic twelfth-century Tau Cross.

Despite the infrequency of references to Tory in the Irish Annals, it’s difficult to imagine, especially given its isolated geographic location, that Norse raiders didn’t pay frequent plundering visits to the Tory monks or didn’t enslave them, as they did those on Iona. However, there’s but a single story of an attack by “Danes” (Norse) in Tory folk memory.

In 1595, the island was, we know, overrun by English army despoilers, who pillaged and destroyed more than a thousand years of monastic continuity. There are, of course, other memorable events associated with Tory history: the vicious slaughter of O’Doherty and O’Donnell forces on the island in 1608; the final naval encounter of the 1798 Rebellion, fought within sight of Tory; and the wreck of “HMS Wasp,” a British gunboat on an eviction and tax-collecting mission in 1884. The Islanders credited the power of prayer and their “Cursing Stone” for the taxmen’s “terrible misfortune.”

Tory Island has also escaped more recent calamities, like the Irish government’s evacuation and relocation scheme. In 1974, after a nearly eight-week storm mercilessly pounded the island, cutting off food supplies and communication, it appeared Tory’s fate was sealed. Off-shores, like Inishturbot and Inishbofin, were doomed, but Tory simply would not die.

Enter Diarmuid O’Peicin, feisty Jesuit and parish priest of Tory, to champion the Islanders’ cause. On arrival in 1980 Fr. O’Peicin vowed to go down fighting. Highlighting the plight of the Islanders, taking their cause to the European Parliament and the hallowed halls of the U.S. Congress, the determined priest called attention to the Irish government’s “benign neglect,” and raised funding to help underwrite ferry services and an electric power station. Cottage industries and an Island Co-op added to Tory’s fiscal stability.

Nonetheless, offers of government housing on the mainland and memories of the ravages of “the Great Storm” drove some island families to relocate, many to nearby Falcarragh. Frank Dolan, writing in The Irish Post, called the unfortunate affair “a mighty battle against all the odds.” It was, in fact, a Pyrrhic culture-shattering victory, but, in the end, the Islanders would persevere.

Of Art, Artisans and Artists

The island has had its share of talented artists – accomplished musicians, sean-nós singers, dancers, and storytellers – though, in more recent years, the traditional arts have been eclipsed by “mainland arts.”

It’s said that when the English artist Derek Hill came to Tory in1956 and set up his easel to sketch the landscape, he was confronted by Jimmy Dixon, an unimpressed local who informed Hill that he (Jimmy) could do better. And, on Hill’s successive returns to the island, he found others who said they could do better still.

With the most rudimentary art supplies, Jimmy Dixon and others worked and reworked canvases, using ordinary house paints to produce startling visual representations of Island life. Hill was astounded at the raw talent shared among the islanders. He must have thought Tory a place that bred artists. His own portraits of the Islanders have been judged among his finest works.

A second generation of painters – Patsy Dan Rodgers, Ruiari Rodgers, Michael Finbar Rodgers, Anton Meenan – followed in the 1970s and 80s, establishing the now well-regarded Tory School. Their paintings capture a sometimes romantic, mystical Tory, as well as a Tory that’s bleak and threatening. Works by these and other Tory artists have been exhibited in European galleries and are found in major private collections. The Dixon Gallery on the Island also houses many of the Islanders’ best pieces.

Song, dance, and storytelling are, it seems, ingrained in Tory life. Singers and dancers, renowned for renditions of “An Maidrin Rua” and other Island favorites, are fondly remembered. At the fireside in the Ostan Toraí – the island’s only hotel – the Doohans, inn-keepers whose families go back centuries on Tory, make mental notes as a local historian recounts a litany of shipwrecks that brought the Islanders occasional “gifts” of wood, coal, cloth, and foodstuffs ... and of the landlords – good, bad, and indifferent – who attempted reforms of a rundale farming system that cut deep into the fabric of Tory life.

A folklorist from Dublin collects folk remedies and cures and learns of the power of blessed Tory clay and poitín in banishing spirits and of the curse of red-haired women on fishermen. She shows special interest in Colmcille’s holy well.

Though they represent strong Tory traditions, there’s little fishing and lobstering, and even less farming on Tory today: currachs have been retired, West Town and Port Doon piers rebuilt, and shallow harbors dredged. The once self-sufficient economy of the place has changed. Islanders no longer look for seasonal work in Derry or Scotland or far-off England. With improved transport and the technology revolution, they can, at last, have a life on Tory.

Apart from shipwrecks and stray fishing boats, no one “accidentally happens” on Tory Island. Yet, Tory is a place well worth happening on. More than the Arans and other Gaeltacht showcases, it preserves genuine customs and beliefs. Tory is not a mere remnant of an Ireland that’s fast disappearing – it’s living testament to a vibrant language and culture, to a way of life.

The island has, for decades, fascinated anthropologists, archaeologists, folklorists, genealogists, linguists, musicologists, ornithologists, writers and poets. It offers scholars, curiosity seekers and visitors alike not only spectacular vistas and a grand day away from it all, but “the full Irish-Irish experience.”

In that, Tory is unique.

Moreover, the Islanders are friendly, hospitable and welcoming; and, if the island is enjoying a kind of cultural renaissance, it is a renaissance now dependent on tourism and art.

Is it a matter of time until tourism fades and Tory artists find more distant subjects? The craic in the hotel bar on any given night or in the social club denies that. Tradition lives on in language, music, dance, and in great wonder-tales.

As long as there are fish in the sea and a king with charisma and pride of place, like Patsy Dan Rodgers, the Island will beckon visitors and émigrés to return. And return they will.

The people of Tory have a will to survive – it’s in the genes. There have been dramatic changes since the seventies and eighties – Tory has a modern school, a new community center, a fine hotel, art gallery, and supermarket. Population rises and falls, and adversities come and go, but as long as the Island has a school and children in it, and men and women passionate about life and about their way of living it, there will be a Tory.