Ireland had a long history of banning films, but even some in recent time caught the attention of the censor. 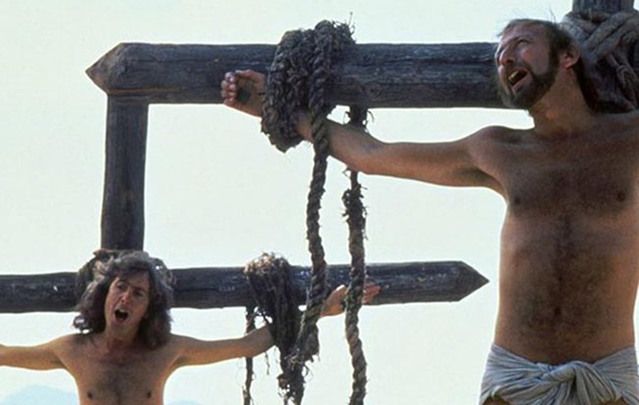 "The Life of Brian": Eric Idle and Graham Chapman in the famous "Always Look on the Bright Side of Life" scene.

Ireland had a long history of banning films, but even some in recent times caught the attention of the censor.

Stanley Kubrick's famous "Clockwork Orange" was banned in Ireland until 2000. Adapted from Anthony Burgess' best-selling novel the movie tells the story of Alex and his gang of violent 'droogs' who kill tramps and rape women.

The movie became infamous for inciting copycat behavior. This was thought to be the reason that Stanley Kubrick withdrew the movie in Britain. However, after his death his wife Christiane revealed that he pulled the film because his family had received death threats.

This movie starring George Clooney, Quentin Tarantino and Salma Hayek tells the story of two criminals and their hostages who take refuge in an establishment populated by vampires.  It was banned due to its demonic representations such as Salma Hayak's character, Satanico Pandemonium. The ban was lifted in 2000.

This black comedy movies features Jim Henson-esque puppets in a perverse comic satire. During its limited release in the U.S. in 2002 critic James Berardinelli wrote "The stories of these ... characters are told in a disgustingly graphic, obscenely offbeat, and caustically funny manner. Meet the Feebles is for those with a strong stomach and a seriously warped sense of humor. The film is so off the beaten track that it makes Monty Python seem main stream."

This is the third of the Marx Brothers' movies starring the famous brothers Groucho Marx, Chico Marx, Harpo Marx and Zeppo Marx. The story takes place on an ocean liner crossing the Atlantic Ocean.

As with many of the Marx Brothers' movies the censors in the U.S. demanded that some of the lines with sexual innuendo be changed however in Ireland and some other countries the movie was banned entirely fearing it would encourage anarchic tendencies. The ban was lifted in 2000.

The story of "Monty Python's Life of Brian" is that Brian is born in the stable next to Jesus and is therefore mistaken for the Messiah. It was banned in Norway, Singapore and Ireland because of its heavy religious satire. It was not well received by religious activists.

The makers of the film used the controversy at the time of its release to their advantage. They marketed the movie as "The film so funny that it was banned in Norway."

Similarly "The Meaning of Life" was banned for similar reasons. Again the highly irreverent movie did not go down well with religious groups particularly the musical sketch, starring Michael Palin, singing "Every Sperm is Sacred".

This Oliver Stone movie tells a story about a couple on a murderous rampage. Stone attempted to defend the movie explaining that it was a satire on how the news media can turn serial killers into celebrities.  Although the censor never gave a reason it was banned in Ireland for many years.

This documentary film on the contemporary state of the Republic of Ireland asked the question "what do you do with your revolution once you've got it?" Although the movie was never banned the Irish government did prevent it from being screened by the state broadcaster, RTE.

Having been accepted to the 1968 Canne Film Festival and Cork Film Festival agreed to screen the movie. Peter Lennon then set up his own private screening. This was followed by a Dublin cinema giving it a seven week run with packed audiences.

Charlie Chaplin's movie satirized Nazism and Adolf Hitler and was popular with the American public and in Britain.The movie was banned in many parts of Europe, including Ireland which technically remained neutral during WWII (or "The Emergency" as it was known there). It became Chaplin's highest grossing film.

The book had been at the center of controversy since its initial publication in 1922 and was banned for over a decade in the U.S. When his movie was banned in Ireland Strick said "I knew what kind of material I was choosing…but I was still surprised at the intensity of the reactions to the film. In Ireland the book had never been banned, but the film wasn't passed there until 2000."