For generations Irish and Irish Americans have believed the “Nine Famous Irishmen” story, but alas, it strays far from the truth. 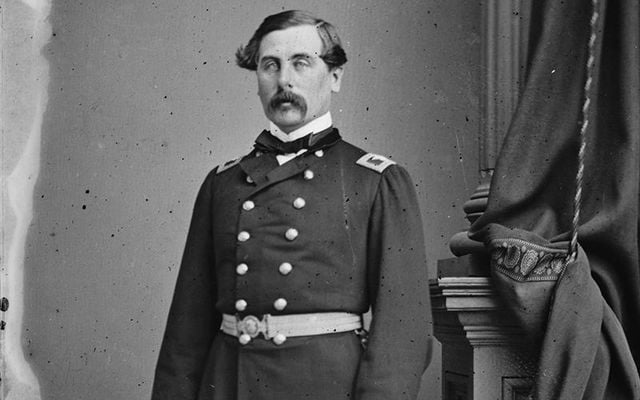 For generations, Irish and Irish Americans have believed the “Nine Famous Irishmen” story, but alas, it strays far from the truth.

If you are Irish, you will have seen at some point the article about the Nine Famous Irishmen who took part in the Young Irelanders 1848 abortive uprising.

They allegedly were sentenced to death, later commuted to transportation to Australia, by Queen Victoria. She supposedly looked up their fate after one of them, Charles Gavan Duffy, became Prime Minister of Victoria.

The article says they all rose to great prominence.

It’s a rattling good yarn often repeated, especially in bar names (there's even one in Vegas), on beer mats, posters and Irish tchotchkes, but there is just one problem:

In the case of most of them the information is just not true.

Here is the Nine Famous Irishmen trope with the truth underneath each man following at the end of the trope.

Read more: On this day: Thomas Davis, composer of A Nation Once Again passed away

"In the Young Irish disorders, in Ireland in 1848, the following nine men were captured, tried, and convicted of treason against Her Majesty, the Queen, and were sentenced to death: John Mitchell, Morris Lyene, Pat Donahue, Thomas McGee, Charles Duffy, Thomas Meagher, Richard O’Gorman, Terrence McManus and Michael Ireland.

Before passing sentence, the judge asked if there was anything that anyone wished to say. Meagher, speaking for all, said: ‘My Lord, this is our first offense but not our last. If you will be easy with us this once, we promise, on our word, as gentlemen, to try to do better next time, and next time – sure we won’t be fools to get caught.’

Thereupon the indignant judge sentenced them all to be hanged by the neck until dead and drawn and quartered. Passionate protest from all the world forced Queen Victoria to commute the sentence to transportation for life to far wild Australia. In 1874, word reached the astounded Queen Victoria that the Sir Charles Duffy who had been elected Prime Minister of Australia was the same Charles Duffy who had been transported 25 years before. On the Queen’s demand, the records of the rest of the transported men were revealed and this is what was uncovered:

So, let’s separate fact from fiction.

We say: True and false. Thomas Francis Meagher died mysteriously as acting governor of Montana territories, not yet a state, after a splendid career highlighted by the 1848 uprising and leading the Fighting 69th in the American Civil War. He was a beloved figure in Irish America.

He was also friend of Lincoln, who deeply admired him as he stood up for the abolition of slavery, when most Irish ignored the issue.

As for the words from the dock attributed to him, in “Nine Irish Lives” he flat out never said them. What he did say was very powerful.

“Judged by the law of England, I know this crime entails upon me the penalty of death; but the history of Ireland explains that crime and justifies it. Judged by that history, the treason of which I stand convicted loses all its guilt, has been sanctified as a duty, and will be ennobled as a sacrifice.”

We say: False. Duffy was Prime Minister of Victoria, a province of Australia, not the country itself. He never actually fought in the 1848 uprising though he was a key figure in the founding of The Nation, the newspaper that fueled Irish nationalist sentiment.

Despairing of Irish independence, even though he had won a House of Commons seat in Wexford, he was not transported by force but emigrated freely to Australia in 1856 and through extraordinary ability became Prime Minister of Victoria.

While he held the job, he became a target of anti-Catholic bias and was eventually defeated. After a spell as speaker he retired to France. His children and grandchildren became notable lawyers and judges in Australia. He took a British knighthood despite his Irish nationalist leanings and died in exile in Nice.

We say: False: McManus died in 1861 the same year the US Civil War started and was never a soldier. He was a Young Irelander, transported down under, escaped from Australia and settled in San Francisco where he became a local Fenian leader. He never joined the US Army and died in poverty at age 50. His funeral back in Dublin was a huge Fenian rallying point

We say: False. Patrick Donahue was a Fenian, fought in the American Civil War as a low-level member of the Army of the Potomac, took part in the invasion of Canada by the Fenians but never held the rank of Brigadier General. Indeed, one of his descendants wrote a book outlining how he battled abject poverty all his life

We say: False. He was a leader of the 1848 rebellion alongside Meagher and William Smith O’Brien. He accompanied Meagher and others on a trip to France, congratulating the new Second Republic government there and they came back with the green, white and orange tricolor which later became Ireland’s flag.

He arrived in New York in 1849 after the uprising and trained as a lawyer, later a judge connected to the Boss Tweed political machine. In 1882 The New York Times reported on a major legal dispute over whether O’Gorman or a rival judge should be seated on the New York State Supreme Court. It seems O’Gorman won.

But there is no Richard O’Gorman Governor of Newfoundland, a title that goes back to 1610. Almost all the holders of that position were knights of the British Empire, hardy the likely achievement of an Irish rebel.

“Maurice Leyne, Attorney General of Australia, in which office Michael Ireland succeeded him”

We say: False. Maurice Leyne took part in the 1848 uprising, served a long prison term but was never deported to Australia. He remained an Irish rebel all his life and became well known as a journalist and editor, settling in Tipperary where he edited the Tipperary Leader. He died in 1854 and never even saw Australia.

We say: False. It appears there was no such person, no Young Irelander, no Attorney General of that name. Completely made up it seems.

We say: True, but boy, the Irish should think twice before honoring this guy. Emigrated freely to America at age 17 with his sister.

Worked as an editor and espoused the Young Ireland cause.

He returned home to take part in the 1848 Rising and fled back to America disguised as a priest. Later went to Canada but his political philosophy utterly changed, and he turned viciously against the Fenians, became a huge fan of British imperialism and was assassinated by Patrick Whelan, a Fenian incensed at his betrayal

“John Mitchel, Prominent New York politician, this man was the father of John Purroy Mitchel, Mayor of New York, at the outbreak of World War I"

We say: False. The Irish should have a deep think about accepting this white supremacist as some kind of hero.

John Mitchel took part in the 1848 Rising but even then, in his writings was exhibiting a deep racial bias against Blacks and Jews.

After transportation to Australia Via Bermuda he escaped from Australia having written a magnificent account of British rule and the needed Irish response called “Jail Journal.”

However, he continued to be an avowed racist and a huge supporter of slavery especially when he took up residence in Confederate Virginia after the outbreak of the Civil War.

Mitchel wrote he wanted the US to be “proud and fond of [slavery] as a national institution, and advocated for its extension by re-opening the trade in Negroes. He lost two sons who fought for slavery in the Civil War. He moved to New York after the Civil War and was far better known as a journalist than a politician. John Purroy Mitchel was his grandson, not his son.

So, what to make of all this? It reads like 19th Century fake news or a made-up propaganda column. Either way, it has endured, believable or not, but perhaps it should be updated. The truth in most cases is even better than the fanciful untruths.