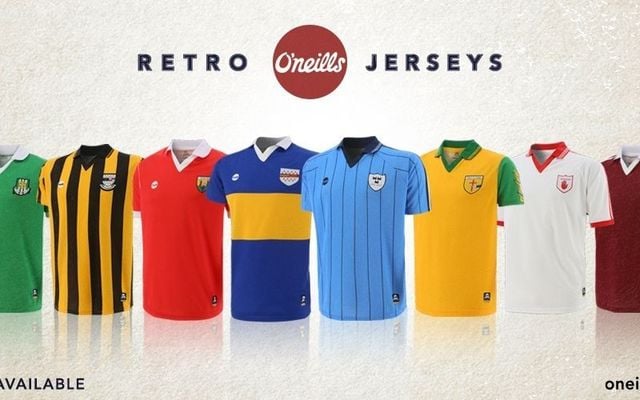 O'Neills is releasing some of its most iconic GAA jerseys in a new retro range of county colors, and they're absolutely beautiful.

The jersey manufacturer has reproduced some of its most famous jerseys, including the classic two-tone blue strip that Dublin's footballers wore in their 1983 All Ireland final win against Galway.

Dublin triumphed over Galway on a score of 1-10 to 1-08 in Croke Park in one of the most famous All Ireland finals of all time. The Dubs had three men sent off in classic final, while Galway also had a man dismissed.

Kerry's treble-winning football team in the mid-1980s is also commemorated in the new retro range, while Galway's hurlers from the late 1980s are also immortalized.

The Mayo team that reached the All Ireland football final in 1989 - the county's first appearance in a decider since 1951 - is also remembered in the new line of clothing, while Antrim's hurlers, who reached the hurling final in the same year, are also remembered.

Tipperary's hurlers, who beat Antrim in that decider to win their first All Ireland for 18 years, are also honored in the new retro range, in addition to Cork's footballers and hurlers, who both won All Irelands in 1990.

Meath and Down, who contested the 1991 All Ireland football final, also make an appearance

Cormac Farrell, Marketing Manager O’Neills said that the new range was inspired by the retro GAA matches that appeared on television screens during the coronavirus lockdown.

"During the COVID-19 lockdown period, GAA fans have been able to enjoy some of the great matches of the past which have been replayed on TV," Farrell said. "A lot of people commented on the jerseys and the demand was there to reproduce some of the classics.

"Our retro range will appeal to those who remember the glory games from the first time around as well as those younger players and supporters who have only seen them for the first time more recently but wish to emulate the stars of a previous generation."

The retro jerseys will be manufactured with modern research and technology, O'Neills said, and can be bought online at oneills.com or from any O'Neills retailer.