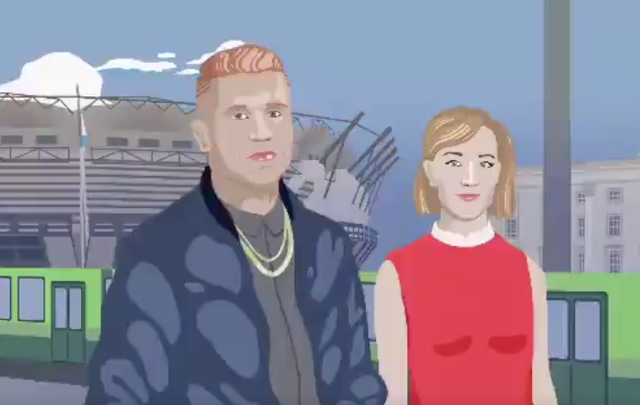 An illustration of Saoirse Ronan and Macklemore Ceol 2018

Last year, the duo lent their talents to Ceol 2018, the annual compilation album of contemporary songs sang in the Irish language.

Radio presenter and curator of the project Eoghan McDermott took to Twitter to commend the pair for their involvement. He revealed that they had recorded an Irish poem to 'introduce' the album.

Saoirse Ronan & @macklemore recorded a spoken word intro as Gaeilge for #CEOL2018 & I love them for it. It's about how the language is beautiful & versatile but delicate & needs people to help it along. Huge love to them for being involved. Please share the love! Failte go Ceol!X pic.twitter.com/sPvhXMyvvy

The performer previously reminisced on his first-ever gig in Ireland in 2000, when he played for a small crowd of 200 people.

"I had never experienced that level of energy the Irish brought to the show. My family's history comes from Ireland so to get that type of love felt like a homecoming, a community of people whose support for my music would only be rivaled by my own of Seattle, Washington.  There was nothing like it," he said.

The line-up for Ceol 2018 involved top acts like Kodaline, Wheatus, The Coronas, and Picture This performing their hits as Gaeilge.

The album was compiled by Conradh na Gaeilge and Raidió Rí-Rá in conjunction with the Irish radio station, RTÉ 2FM. In a bid to foster enthusiasm for the national language, the album will be given to every school student in Ireland free of charge.

This August, we're celebrating Gaeilge (the Irish language) and Irish music with a series highlighting those around the world speaking and learning Irish and playing Irish music. Throughout the month, we'll look at ways you can learn the language wherever in the world you are, discover what is your very favorite Irish song and even travel to some of the best Irish music festivals in the world to bring you to the heart of the action.

You can find all this and more in our music section here or in our Irish language section here. You can also follow throughout the month by using the hashtags #ICMusic, #ICGaeilge or by following us on Facebook, Twitter, Instagram or LinkedIn.

Read More: Saoirse Ronan tells Vogue that the Irish goodbye is not a real thing