A previously unheard message from John F. Kennedy to the people of Ireland and a private message to friend Dot Tubridy has been uncovered in Co Meath. 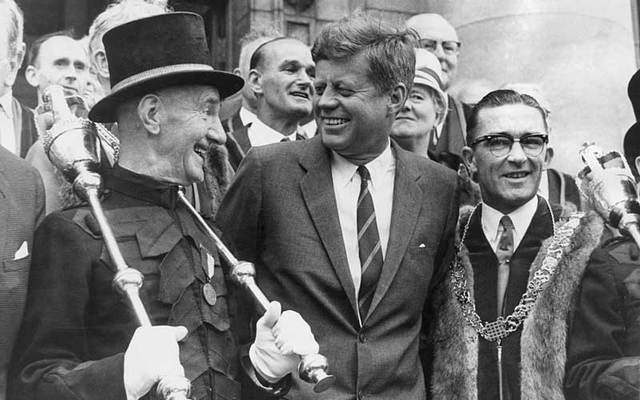 A previously unheard message from John F. Kennedy to the people of Ireland and a private message to friend Dot Tubridy has been uncovered in Co Meath.

The recording was found by the Trim Tourism Network during the curation of the Dot Tubridy exhibition “Dear Dot” currently on view at the Trim Visitor Centre in Trim, Co Meath.

Dot Tubridy was a long-time family friend of the Kennedys and an unofficial Irish ambassador to the U.S.

The two-minute message from John F. Kennedy, made at the close of the Los Angeles convention when he was a senator, thanks Tubridy for “her invaluable contribution” to the U.S. election campaign.

A message to the Irish People from John F Kennedy sent to good friend Dot Tubridy in Ireland. This message remained unheard until the official opening of our Dot Tubridy Exhibition in Trim entitled 'Dear Dot'. Take a listen now!@johnfkennedy @JFKLibrary@Oprah@barackobama pic.twitter.com/mDVusyVU2h

"As you may know, I've been nominated by the Democratic Party to be their standard bearer.

"I wanted to take this opportunity to send my greetings to the people of Ireland.

"All my great-grandparents came here during the potato famine 100 years ago to Boston. This country has been very generous to the Kennedys and the Fitzgeralds but we also think of Ireland.

"Ten years ago while staying with my sister in Waterford, I drove to New Ross Wexford and visited the Kennedys in the same house that my great-grandparents had come from so many years ago.

"This is going to be an important election - important for the United States and I think, important for the entire free world. I think we have an excellent chance to win but win or lose, you can be sure that we will fight the good fight and I will have the chance to come back to Ireland again soon.”

What a beautiful photograph of Dot Tubridy & JFK that is included in a wonderful exhibition @TrimTourismN on her life called #DearDot opened by Courtney Kennedy Hill #family #trailblazer #JFK #kennedy pic.twitter.com/1fcV16cZcm

At the end of the recording, he includes a personal message for Tubridy.

"Dear Dot, as always I'm late with this but here is a message to the people of Ireland. If you think it's alright, you can use it in whatever way you think best.

"We miss you and hope you're coming back soon. Your contribution to the campaign and to the candidate was invaluable in West Virginia and Wisconsin and we feel we're going to need you this fall so come back to the United States soon. We'll put you to work."

David Gorey, vice chairperson of the Trim Tourism Network, told the Irish Mirror he believes the footage is from 1959.

"No-one even knew this footage existed before we found it among this treasure trove of memorabila which also includes letters from singers Dean Martin and Bing Crosby.

"The Trim Tourism Network and the Lawlor and Gibson families (Dot's relatives) were left shocked and surprised when we heard it and we even surprised Courtney Kennedy (daughter of Ethel and Robert Kennedy) who came to the Trim Visitor Centre to open the three-month long exhibition which is open to all."