Unless your last name includes an apostrophe, you’ll never know the plight of getting computer systems – for everything from air travel to banking – to recognize your proper name. 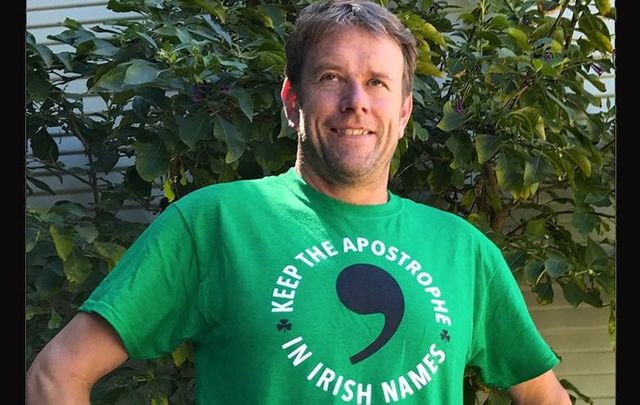 Imagine trying to book a plane ticket or apply for a credit card and being told that to do so successfully you’d have to change the spelling of your name.

Fed up after years of being forced to spell their last name incorrectly, Irish American father and son Thomas and Matt O’Leary are taking a stand on the issue.

They’re the founders of an advocacy group called Keep the Apostrophe in Irish Names. Their mission is to gather first-hand accounts of the frustration that those with apostrophe names experience and to spread awareness in hopes of an eventual resolution.

Unbeknownst to the majority of the population without any apostrophes or other special characters in their last names, this is a constant battle for those with such surnames.

Unless your last name has an apostrophe in it, you’ll never know the plight of getting computer systems for everything from air travel to – as recently as a decade ago – voter registration to recognize your proper name.

While apostrophes are found in a variety of names, including Italian, African and French, perhaps some of the most common names with apostrophes are Irish surnames – the entire category of O’ names, in particular.

“The situation with the Irish apostrophe has been vexing me for many years,” Thomas O'Leary told IrishCentral.

“My dad told me that when my grandfather came to the U.S. from Inchigeela in County Cork in the 1880s, he passed through Castle Clinton in the Battery, the pre-Ellis Island immigration station. Evidently, a clerk there considered the apostrophe a bother and actually had the nerve to remove it from my grandfather’s entry papers. Thus, when my grandparents met and married in San Francisco the wedding license records the groom as Timothy Leary.

“It wasn’t until 1896 when my dad was born and taken for his baptism that the priest corrected the error and gave the family back our apostrophe.

“Now we have to deal with the same careless messing with Irish names on computer programs, where our apostrophe is rejected as an unacceptable ‘foreign element,’” he explained. “Nervy Castle Clinton clerk reincarnated.”

An Associated Press report on the issue in 2008 – which featured IrishCentral's founder Niall O'Dowd, who'd faced similar difficulty booking plane tickets – went into detail about how the conflict arises, attributing it to common programming practices:

One: Online forms typically have a filter that looks for unfamiliar terms that might be put in by mistake or as a joke. A bad computer system will not be able to handle an apostrophe, a hyphen or a gap in a last name and will block it immediately.

Two: Even if the computer system is sophisticated enough to welcome an O’Brien or Al-Kurd, the name must be stored in the database, where a hyphen or apostrophe is often mistaken for a piece of computer code, corrupting the system.

The best-known instance of the latter was the 2004 Michigan Caucus, when the votes of thousands of people with apostrophes, dashes, and spaces in their last names were not counted.

Today, there is a way to correct and control for special characters in names. This is what O’Leary learned when he consulted with Ashish Lakhiani, a computer scientist.

He offered the insight that many programs don’t currently practice this due to security concerns.

“Computer programmers and information security advisors aim to decrease the attack surface and strengthen the attack vectors in the systems that they develop. This is important for keeping systems safe from attackers. It’s common practice to decrease the opportunity for an end user to enter special characters such as (? | | " | % | \ | / | : | ‘ * | Due to their usage in popular programming languages like C, C++, PHP, C#, SQL, and Java many of these characters can trigger code execution in Information Systems if not handled correctly in the code.

Still, he stated, “It is unfair to ask individuals to skip the apostrophe in their names due to this reason. With a little bit more work on code level checks this character can be allowed for use. Apostrophes in names have cultural value and help to make them unique in an artistic way. This character should be accommodated for names in software systems.”

Through their recently launched website, the O’Learys aim to gather more first-hand accounts from those with apostrophes in their names and from there to develop a stronger advocacy community. They also have t-shirts with their logo, which they hope people will wear to spread the message even wider.

“Our Keep the Apostrophe in Irish Names project is to fight back and get banks, stores, and other businesses to accommodate our humble little mark,” Thomas said.

His suggestion for what to do? “Contact companies and request they do whatever it requires to adjust their websites. And, of course, we would like people to wear our logo to protest with pride and purpose.”