The effects of the great famine didn’t turn around when the potatoes grew again. Those who survived it, and those who stayed, would be ground down and beaten into a submission of intellect and human value that would last a hundred years and more. 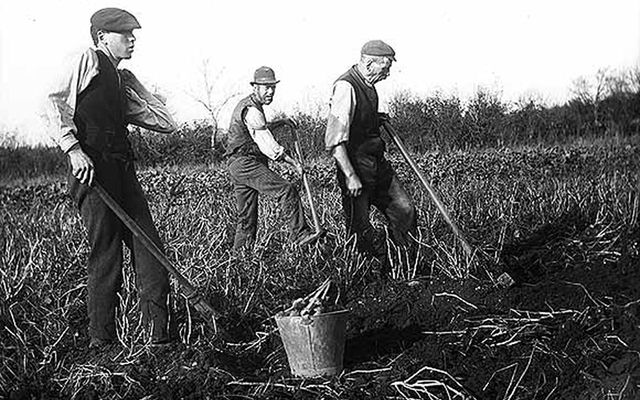 History tells us that The Great Famine in Ireland began in 1845 and ended in 1852. But though the hunger was eventually satiated, the effects of the famine lasted long into the minds and the disposition of those who survived it, and the generation thereafter – the sons and daughters of the Great Hunger.

When I was ten years old and growing up in West Limerick I began a one stop milk round. Every evening after school, until he died, I brought Mick Harrington a bottle. It was filled to the brim, stoppered by a wedge of newspaper and still wearing the logo of the whiskey company who first bottled it.

Mick was old then, though it didn’t show in his bearing. He stood ramrod tall, a full head of wavy gray hair stood steadfast against the years, and the face, apart from the discoloring around his eyes, was alert and curious. Once he had worked for my grandfather and moved on, to a succession of other farmers, when grandfather’s son replaced him. He became what was called a ‘farmers boy’. A name that followed his likes until they had reached old age. When a plethora of work backed up on my father’s land, Mick was called in. No neater man, my father used to say. Maybe a bit slow but he left nothing of carelessness behind him.

He lived in a cottage mile and a half away from me. It was always spotlessly clean. I could see it from the rise in the hill field, standing alone in its splendor, the whitewashed walls sending filaments of light above the hedgerows. Before the front door there was a concrete pathway bordered on each side by low cut privet. He would convey me to the lattice gate when I left and, as he walked, scrutinized the shape of the little hedgerows. If a spring was amiss, a few centimeters above its fellows, he would return for a pair of scissors and snip the erring one off.

Mick was the epitome of the famine’s great sundering.

It began fifty years before he was born and its residue fell on countless men of his time. Work was hard to find, and when was found, committed the worker to a lifetime of drudgery. It did likewise to his wife and children.

Mick’s brothers emigrated, all five, and the three sisters went in their wake. Amby was the first to go, day after All Souls, November 1909. Within a decade the rest of his siblings had followed. Amby settled in California, a place called Yreka. Every year a Christmas card arrived in Mick’s cottage. Not in Amby’s hand for Amby couldn’t read or write. There was no compulsory schooling in his time. One year a parcel came containing a pair of framed pictures. I remember their captions. I saw them every day. One was hung from the wall facing Downey’s Hollow. It said, “El Capitan above gentle flow of Merced River.” The caption on the other, looking out on Haley’s Grove, was, “Horse Creek Falls and granite north face of the Cleaver, Minarets Wilderness.”

Thadhy never wrote. No one knew where he lived if he still lived. The last Mick heard of Miley he was in Portland Maine, working on the docks. His sister Madge wrote often until she passed away. She used to send him parcels of clothes, the cast offs of her husband. Once Mick pulled a bundle from the bottom drawer of the kitchen press, shirts, pullovers, caps, leggings. He held up a jumper from the bundle, it was bright yellow and had a picture of a rearing piebald horse decorating the front. ‘Where would a man be going?’ he said to me, ‘with a thing like that upon him. What in the name of God would people think?’

Siney was in the Marines. He came home once when he was posted in the south of England. He stayed for one night and was gone at first light. He said goodbye and added, "how in God’s name could a body live in this god damned nowhere, stuck between Downey’s Hollow and Haley’s Grove."

That was as much as Mick remembered. Maybe others of the clan did make contact but he couldn’t remember if they did. Maybe there might be something in the lowest drawer in the kitchen dresser. If I had a mind go and search it might be worth the while. But there was no great enthusiasm in the way he said it.

Mick had two singing cage birds. A goldfinch and a bird called a mule, a cross between a goldfinch and a canary. The mule sang the pure notes of the canary as the goldfinch did with his ancestry. But they learned from each other-- songbirds are musically inventive—and the time came when each could perfectly mimic the other’s natural song. Sometimes the singing became a contest. Then Mick would throw a towel over one of the cages and the bird inside stopped, thinking that night had fallen. The other bird stopped too, thinking it had outdone its rival.

The birds sang to him, he told me. In his loneliness, they became the sounds of wordplay. Apart from me, he seldom met another soul. Sometimes, when I opened the gate silently, I heard the sound of a voice within. The first time it happened I put the bottle on the doorstop, assuming that Mick had a visitor. Never do that again, he told me. Next time it happened, I gingerly pried the door open. There was no visitor. Mick was having a conversation with his birds. Asking a question from the mule, making a response from the goldfinch.

It wasn’t just the absence of rudimentary schooling that limited wordage on people like Mick. It was the constrictions of the time he lived in that made him so quiet and so reserved. The effects of the great famine didn’t turn around when the potatoes grew again. Those who survived it, and those who stayed, would be ground down and beaten into a submission of intellect and human value that would last a hundred years and more.

My father was a soul brother of Mick Harrington. A deeply quiet man who would never offer an opinion if it concerned anything outside the bailiwick of his own land and its experiences and tradition.

I carried their silences and their diffidence with me.