First ship to sink in WWII discovered off coast of Ireland

The SS Athenia, a passenger liner on its way to Canada, was torpedoed by the Germans just eight hours into the war. 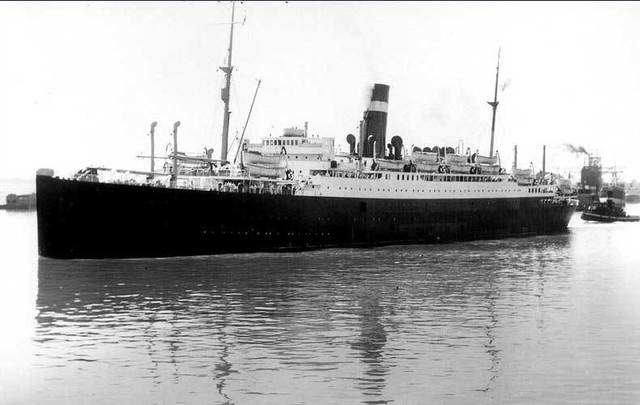 The SS Athenia in Montreal Harbour, 1933. National Archives of Canada via Wikipedia

The first ship to sink in World War II has been discovered on the Atlantic seabed off the northwest coast of Ireland.

The SS Athenia, a passenger liner on its way to Canada, was torpedoed by a German submarine 200 miles off the coast on September 2, 1939, just eight hours into the war.

The liner was spotted by a German U-boat under the command of Fritz-Julius Lemp, who tracked the ship for three hours and, believing it was an armed merchant cruiser, fired two torpedoes at it. One of the torpedoes exploded on the port side in the Athenia’s engine room.

Although the ship took several hours to sink and many of the passengers and crew escaped in lifeboats and were rescued, 117 people died.

He said the data shows the hull of the ship split in the aft section where one of the two torpedoes hit.

The marine scientist added that the dimensions of the target match what would be expected of a 500ft-long, 12,500 ton passenger liner, and the coordinates are close to those sent out by the ship’s distress call and recorded in the logbooks of the vessels that came to the rescue.

He told the BBC: “Can I go into a court of law and say, ‘100 percent, that’s Athenia?’ No. But barring a photograph I can say in my expert opinion there’s a very, very high probability that that’s Athenia. Everything fits.”

Survivors of the Athenia sinking are show being hoisted from a light boat onto the American cargo steamship City of Flint. Credit: Wikimedia/Imperial War Museums

Mearns, who has found around two dozen wrecks for insurers and television companies, writes about finding the Athenia in his book "The Shipwreck Hunter." He says it was the first wreck in his career “which I’ve identified from my armchair, so to speak.”

Read More: Photos of US army tanks and shipwrecks off the coast of Ireland

According to the BBC , Mearns, who was commissioned to do the search for the BBC, thinks it shouldn't be too complicated to send down a remotely operated vehicle to investigate the sonar contact.

BBC producers had initially intended to stage a live, underwater broadcast from the sunken remains of the ship, but the idea was dropped. Mearns, whose data has since been acquired by the Geological Survey of Ireland, still hopes someone will mount an expedition.