A reindeer bone found in a cave in Co Cork establishes human activity in Ireland more than 20,000 years earlier than previously thought. 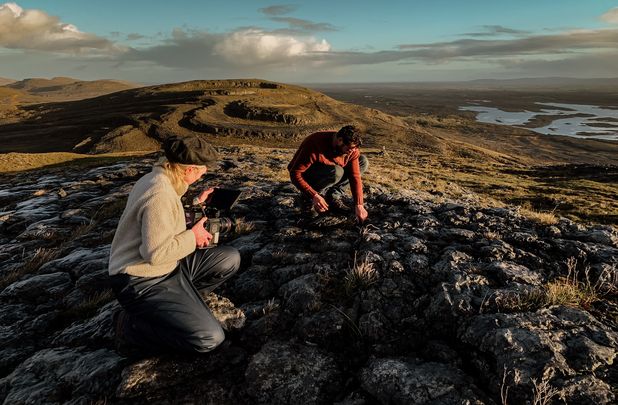 "The Burren: Heart of Stone" - a two-part series by Lahinch-based filmmaker Katrina Costello reveals the story of the reindeer bone discovery. RTÉ

A reindeer bone fragment dating back 33,000 years and bearing chop marks from a flint or stone tool has upended previous assumptions that humans first came to Ireland 12,500 years ago.

The reindeer bone fragment, which was featured on Katrina Costello's "The Burren: Heart of Stone" documentary on RTÉ on Sunday, was found at Castlepook Cave near Doneraile in North Cork and could dramatically alter our perception of Irish history.

The bone was found more than 100 years ago during Naturalist Richard Ussher's excavation of Castlepook Cave between 1904 and 1912. The hind rear reindeer femur contains chop marks consistent with butchering with a flint or stone tool.

Dr. Ruth Carden, one of Ireland's leading consultant zooarchaeologists, undertook a personal research project in 2008 and began examining more than 60,000 bone fragments that were found in 11 limestone caves across Ireland in the 1800s and early 1900s.

Speaking during the second episode of "The Burren: Heart of Stone", Dr. Carden explained that the bones were shipped to the National Museum of Ireland when they were excavated and stored on shelves more than 100 years ago.

They were recently sent for analysis and underwent radiocarbon dating, leading to a seismic discovery that could completely alter the perception of Irish history.

"This bone just changed Irish human history," Dr. Carden said. "We have humans coming into Ireland 33,000 years ago, which changes everything for Ireland and changes north Western Europe as a whole."

"We have butchered reindeer bones which have very deep marks, almost like a chopping mark, made by a broad flat tool, a flint tool or a stone tool," Dr. Carden said during the documentary.

She said that she didn't tell her colleagues about the results for two weeks because she was so shocked by the findings.

"This research is cutting edge and very exciting as it impacts on how we view humans and animals traversing the lands at that time, and their interactions with each other and past ecosystems."

Narrated by Brendan Gleeson, "The Burren: Heart of Stone" examines the history of the region through prehistoric times by exploring rock formations, early settlements, and ecology. The lives of Ireland's prehistoric settlers were described by academics and portrayed by actors as part of Costello's documentary.

"Beneath the surface of the entire Burren, there is a labyrinth of underground passages, rivers, and caves," Costello said. "These are mostly unexplored, but Jim brings us on a journey underground, shedding light on secrets that no human has ever seen."

She said that the caves were like "time capsules of discovery" and that Dr. Carden's discovery "changes Irish history".

"It just blows North-Western Europe open in terms of human movement," she said.

"The Burren: Heart of Stone" two-part documentary series is available to view on the RTÉ Player.