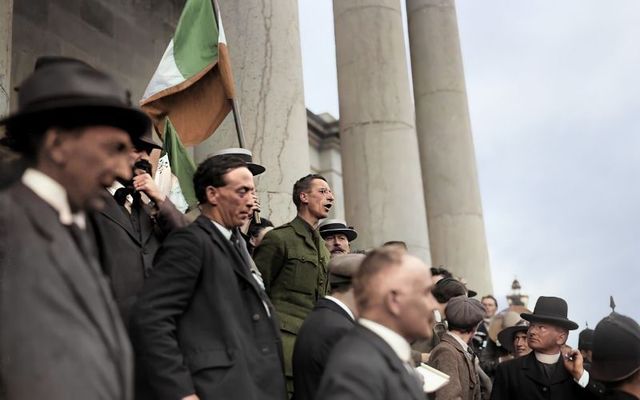 When NUIG Professor John Breslin began colorizing old black and white family photographs, little did he realize that he would go on to publish this book, Old Ireland in Colour, which rocketed to the top of the Irish bestseller's list and tells the story of Irish history like never before.

The Old Ireland in Colour Project was founded by Breslin in 2019 and quickly went viral on social media, amassing more than 25,000 followers on Instagram and a further 23,000 followers on Twitter.

The images proved to be a huge hit on social media and Breslin began to branch out, teaming up with social historian Dr. Sarah-Anne Buckley to colorize hundreds of photographs from multiple eras of Irish history. 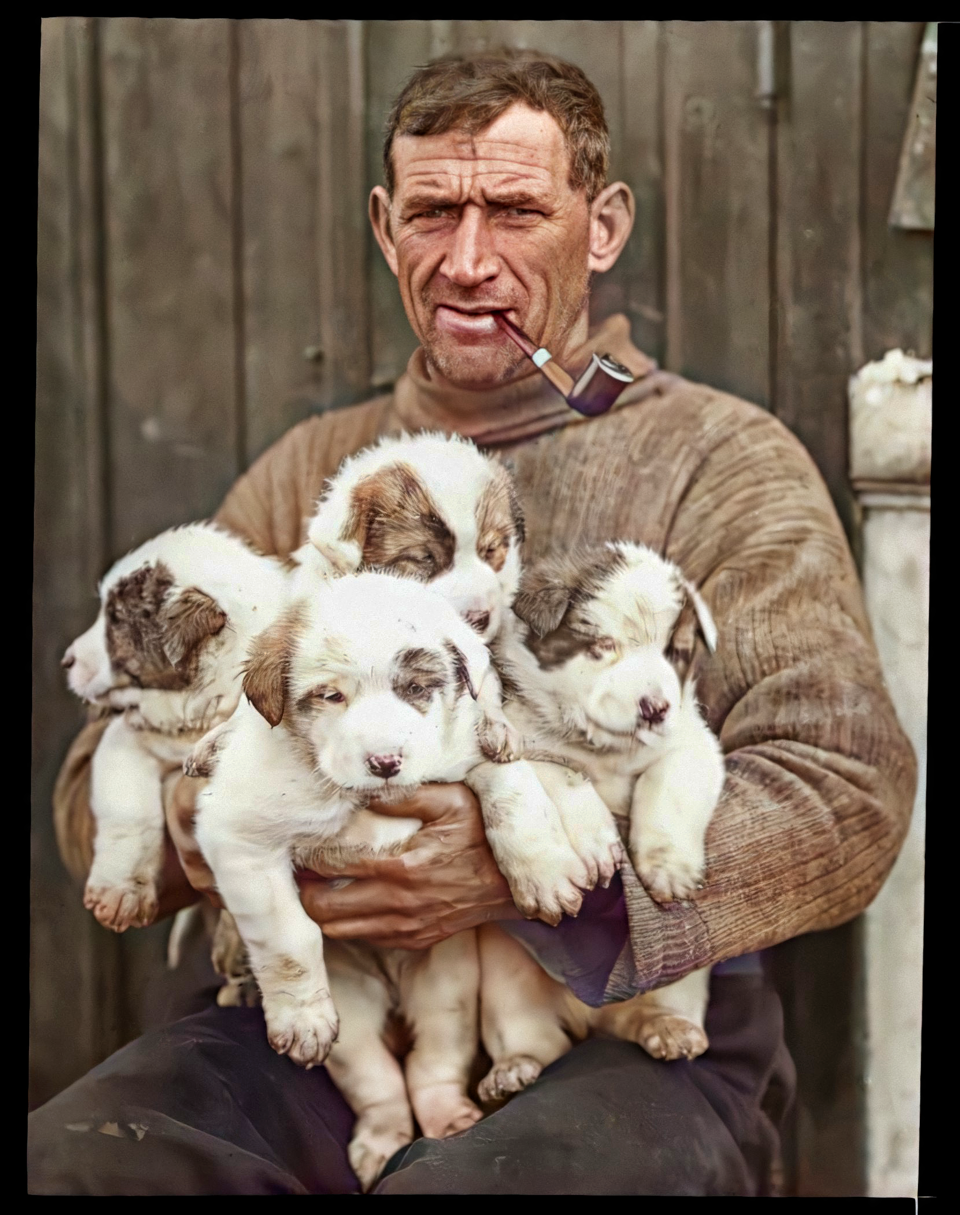 Tom Crean holding four sally's pups is one of the most popular colorized images in the book.

Through painstaking research, Breslin and Buckley unraveled every minute detail of black and white photographs in historical archives, including The National Library of Ireland, the National Folklore Collection, and the Library of Congress.

Behind every image in the book is an untold amount of research; Buckley and Breslin had to sieve through tonnes of documentary records to uncover as much detail as possible about the subjects in the photographs.

Armed Royal Irish Constabulary members outside a shoe shop Patrick Street, Cork City 1921 Source: https://www.flickr.com/photos/nlireland/16037145438 @nationallibraryofireland #deoldify We based the RIC uniform on reconstructions of original uniforms (https://thehistorybunker.co.uk/royal-irish-constabulary-ric-uniform). The 'Clearance Sale' sign in Burke's shoe shop had some small chequered flags on it so we made it black, and we added some red to the sale price signs in the window. We colourised a few shoes manually for variety. We gave the boy a blue outfit, and repaired various scratches and marks on the original photograph - in particular the large crack halfway across the photograph. In the background is Wesley Chapel, Cork Methodist Church. There is a bookseller on the right according to the NLI Flickr thread https://www.flickr.com/photos/nlireland/16037145438 - perhaps “station” is the first part of the word “stationery”.

"We can't know for certain what people were wearing, so John has to know what the tone or color would be for someone of that social class. So, you're generalizing in that way, but the end result has been pretty amazing."

Buckley said that Breslin's close relationship with his social media following has enabled several relatives of lesser-known subjects to come forward and inform him about details that would have been otherwise impossible to find in documentary records.

Both Breslin and Buckley believe that colorized photographs allow people to connect with history in a completely different way.

"I often think that colorized photographs are the closest we will get to time traveling," Breslin told IrishCentral. " When the photograph is colorized, the whole thing becomes more relatable: whether it’s a person or family living in extremely difficult and harsh conditions, or the beautiful architecture that in some instances is long gone."

Buckley, meanwhile, believes that the Old Ireland in Color project has precipitated an interest in areas of Irish history that previously went under the radar.

"I think it's starting a lot of conversations, which I love as a historian," she said.

"It's a very broad subject matter for people and I think you'd be hard-pressed to find someone who didn't have an interest in at least one of the images and what they're about."

Both Buckley and Breslin are adamant that the images are not replacements of the original sources, rather they are a different view of the past. All images in the book include references to the original source in the hope that readers will examine the differences between the original image and its colorized adaptation.

The book is broken into five different sections - The Irish Revolution; Society and Culture; Women and Children; The Irish Abroad; and Scenic Ireland - and it documents the dramatic change of Irish life over a 125-year period stretching from the end of the Famine to the Troubles in Northern Ireland.

With a number of War of Independence centenaries taking place in 2020, the Irish Revolution has proved especially popular, Buckley said. 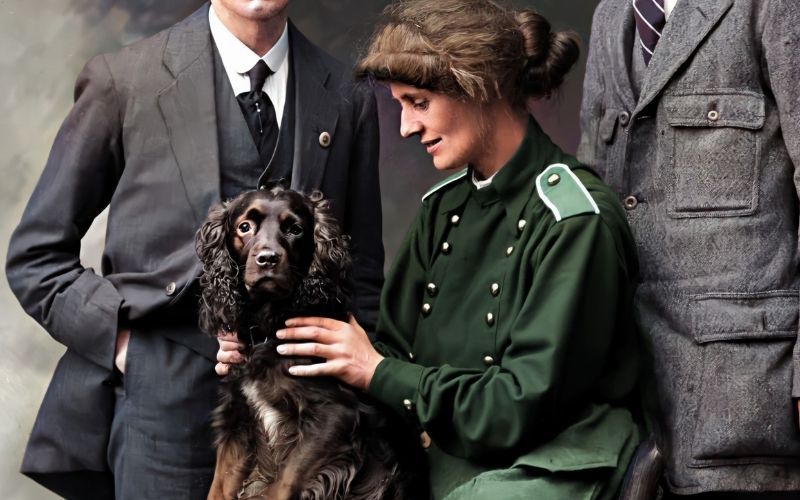 Countess Markievicz, one of the most important figures in the War of Independence, in Waterford in 1917

However, all sections resonate with readers at some level, and a healthy mixture of ordinary people and seismic moments in Irish history ensures that there's something in there for everyone.

Of particular interest is the Irish Abroad section, which reimagines photographs of some of Ireland's most famous exports, including Admiral William Brown, who is regarded as one of Argentina's national heroes, and Patsy Donovan, one of the most famous managers of the Boston Red Sox.

Also included in the Irish Abroad section is Violet Gibson, who shot Benito Mussolini in the face, and Brother Walfrid, the Irish Marist Brother who founded Glasgow Celtic Football Club.

A number of people are drawn to the Society and Culture section of the book, according to Buckley, because it shows how Ireland transformed over 120 years.

"You can really see the difference between late 19th-century photographs and the photographs of Ireland in the 1960s. You can see how much change there has been over 120 years," she said. 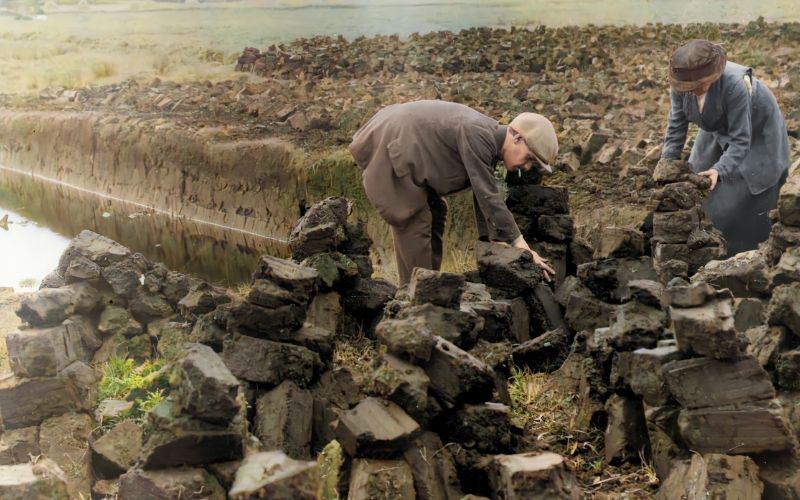 Available at €19.99 from Merrion Press, Eason, and all good online booksellers, "Old Ireland in Colour" makes the perfect stocking filler for Christmas next month.