"Movement of Extremists": the secret police records from the 1916 Easter Rising

The “Movement of Extremists” reports trace the movements of the future leaders of the Easter Rising. 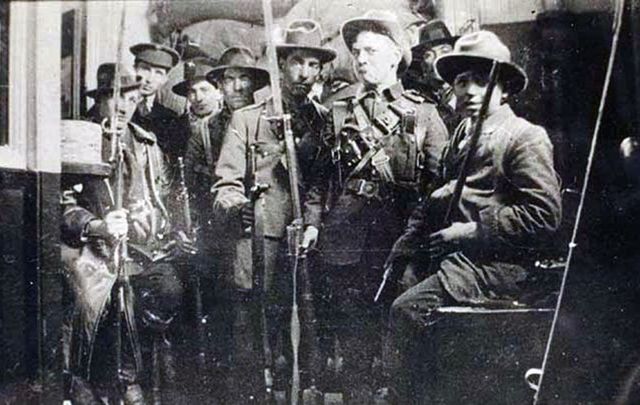 100 years after the 1916 Easter Rising, surveillance records from the Dublin Metropolitan Police were made public

Editor's Note:  Between April 24 and 29 in 1916, the Easter Rising took place, changing the nation of Ireland forever. In the run-up to that historic anniversary, we take a look back at some significant incidents and snippets from that time - from newspapers coverage to little-known facts, individual acts of heroism to how the actions of those who lost their lives changed history.

In 2016, the National Archives of Ireland released 100-year-old secret police files compiled by the Dublin Metropolitan Police (DMP) that reveal year-long surveillance of the leaders of the 1916 Easter Rising.

In a project named “Movement of Extremists,” the DMP compiled daily reports on the actions and whereabouts of some of the Rising’s biggest names, targeting a massive 230 people. Names included the future Proclamation signatories Thomas Clarke, Seán Mac Diarmada and Thomas MacDonagh, Professor Eoin MacNeill and Bulmer Hobson.

The files have been available in the National Archives for years but could only be viewed by specialist scholars on request. They have now been digitized and documents will be made publicly available in chronological order right up until the Rising’s centenary next year.

The available reports begin on June 1, 1915, with a detailed account of the movements of J.J. Walsh and founder of the Irish Volunteers, Prof. MacNeill.

“J.J Walsh left 37 Haddington Road at 11.30am and proceeded to MacArthur's House Agents, 79 Talbot Street where he remained for 20 minutes. He afterward inspected a vacant shop at 20 Blessington Street,” reads the report.

It continues, detailing Prof. MacNeill's visit to Thomas Clarke at his shop in 75 Parnell Street. Among the others seen entering the shop where the future President of Ireland Sean T. O’Ceallaigh and Frank Fahy, who was sentenced to death for his part in the Easter Rising.

The reports show that the DMP had a particular interest in Thomas Clarke and kept his shop under strict surveillance. Clarke was a veteran republican and had previously spent 15 years in jail in England. It has been argued that he is the person most responsible for the Rising. The first five days of reports begin with details of the visitors to Clarke’s shop.

Read More: Five surprising facts about some of the 1916 Easter Rising leaders

Some of the reports include publications of the time, such as a copy of the socialist publication “The Workers Republic” dated June 5, 1915 and an issue of the Republican newspaper “Ná Bac Leis” dated May 29, 1915 where translations of the leading paragraphs have been included for the authorities in Dublin Castle.

As well as monitoring individuals, the DMP also kept surveillance on many events throughout 1915 and 1916 where there were many republicans in attendance. These included the funeral of veteran Fenian Jeremiah O’Donovan Rossa in August 1915, the annual convention of the Irish Volunteers, and anti-recruitment / anti-conscription rallies.

Any congregation of “Sinn Féin” Volunteers was noted. The entry for June 4 reads: “Thirty members of the Sinn Féin Volunteers without rifles assembled at 25 Parnell Square at 8.30 pm and afterward in charge of P. Beasley went route marching towards Fairview. They returned at 10.30 pm. About the same hour 44 Sinn Féin Volunteers without rifles and in charge of Frank Fahy marched from 41 Parnell Square towards Glasnevin. They returned at 10pm. and dismissed without further parade.”

The extent of the surveillance is surprising considering that when the Rising took place, the British Army was taken by surprise and was unprepared for the rebellion. The lack of knowledge about the Rising was seen as a massive failure of intelligence. Long-serving chief secretary to Ireland Augustine Burrell was blamed for the failure and resigned a few weeks later.

Read More: Diary of an Irish rebel fighting in the 1916 Easter Rising (PHOTOS)

The release of the documents is part of a larger digitization project undertaken by the Irish Department for Arts, Heritage and the Gaeltacht for Ireland 2016, the commemoration program for the Easter Rising centenary.

Director of the National Archives John McDonough told the Irish Times that the chronological release of the material allows for the public to fully understand the lead up to the Rising.

“People will be able to read how key players were identified, followed, and put under surveillance, and read the thoughts of the detectives tracking them,” he said.

The original documents can be viewed on the National Archives website.