Why Michael Collins' hat was removed from a Dublin museum

The saga of the hat Michael Collins was wearing when he was gunned down at Beal na mBlath in 1922. 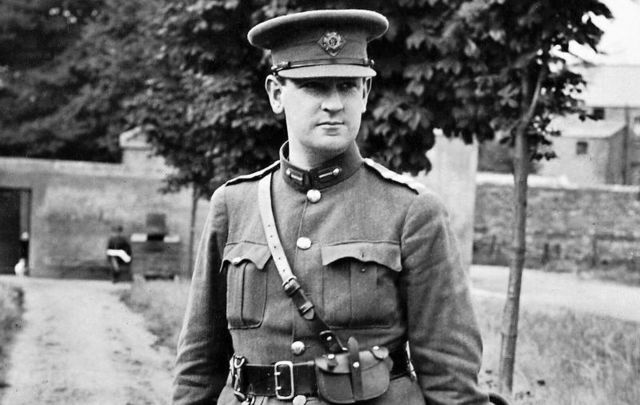 The hat Michael Collins was wearing when he died at Beal na mBlath was removed from a Dublin museum display. National Library of Ireland / Public Domain

The hat that Irish revolutionary Michael Collins was wearing when he was gunned down at Beal na mBlath in 1922 was removed from the display at the National Museum of Ireland, in 2018, because "blood and brain residue" were visible on it.

The historic hat had been on display at the Dublin museum for decades, but when the Collins exhibition was moved to Collins Barracks in 2006, curators felt the removal of the cap would be more in line with its “modern” museum ethics, the  Irish Examiner reported.

Dr. Audrey Whittey, who is the Keeper of the Art and Industrial Division at the museum, said in 2018 that the decision to remove the hat was made out of respect Collins’ descendants over a decade ago.

Read more: The ambush and death of Michael Collins at Béal na mBláth in 1922

“The cap is no longer on display and one of the reasons is due to the sensitivity of General Collins’s blood and organic matter on the object, which is an integral part of the artifact itself."

However, Collins’ coat is still on display, and Dr. Whittey says having both coat and cap on display was not necessary.

"The blood on the greatcoat is more subtle and not as graphic and it has the mud from the scene that day at Beal na mBlath,” she said.

She added: “Curators, in taking the decision on the cap, realized the coat, with the mud stains and blood, would have told the story on its own, regardless.”

“The coat on its own speaks volumes.”

Michael Collins was shot in an ambush at Béal na Bláth, Cork, 22nd August 1922. He was wearing this greatcoat when he...

A grand-nephew of Michael Collins has accused the museum of trying to “hide the horror of the civil war.”

Robert Pierse, the head of a legal firm in Listowel, said the hat should be immediately put back on display with his greatcoat. He said he was never contacted by the museum about the removal of the hat and the family had no problem with having the cap remain part of the exhibition, the Irish Examiner reported.

"It should be on display to remind us of the horror of the civil war and what people can do to each other, brother against brother," he said.

“What the National Museum have done is all part of political correctness rubbish.”

"They talk about ethics; what is ethical in hiding the truth. The words 'ethics' and 'love' are the most abused words in the English language.

"The cap shows Michael Collins was shot in the back of the head and you can't hide the reality of the dreadful things that happened during the Civil War.

"Collins would never have thought that he would be shot by one of his own."

The cap is preserved and can still be viewed at the museum by prior appointment.