“Find of a lifetime:” Archaeologists find another Newgrange in Ireland 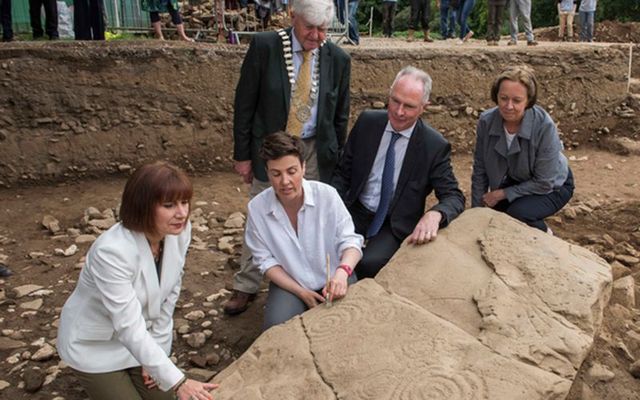 The Minister for Culture, Heritage and the Gaeltacht, Josepha Madigan, TD, at Dowth Hall in County Meath to see a 5,500-year-old passage tomb cemetery discovered over recent months. RollingNews.ie

Archaeologists in Ireland made a major new discovery at the Brú na Bóinne World Heritage Site in July 2018, revealing a 5,500-year-old megalithic passage tomb cemetery that is being described as a "find of a lifetime."

Following research carried out by agri-technology company Devenish and University College Dublin School of Archaeology, two burial chambers have been discovered within the western part of the main passage tomb beside the 18th-century Dowth Hall in Co. Meath. The chambers were covered by a large stone cairn which was around 131 foot (40 meters) in diameter.

"For the archaeologists involved in this discovery, it is truly the find of a lifetime,” Dr. Clíodhna Ní Lionáin, Devenish's lead archaeologist for the project told RTÉ.

“The find of a lifetime” - archaeologist Dr Clíodhna Ní Lionáin on the discovery of a Megalithic passage tomb dating back some 5,500 years at the 18th century Dowth Hall in County Meath. pic.twitter.com/MhkAAoCTxp

The archaeological research has also discovered six kerbstones which would have formed part of a ring of stones that followed the cairn perimeter. The cairn is a mound of rough stones built over the burial chamber as a landmark, whereas the kerbstones would have marked the outside of this mound. One of the kerbstones identified is heavily decorated with Neolithic carvings and is said to be one of the most impressive discoveries of megalithic art in Ireland for decades.

This latest discovery comes less than a week after major new finds in the Co. Meath Brú na Boinne prehistoric complex. With thanks to the drought caused by Ireland’s recent heatwave, historian and photographer Anthony Murphy last week discovered a henge up to 656 foot (200m) in diameter near Newgrange while flying a drone in the area.

"Myself and Ken Williams of Shadows and Stone imaged some very substantial and previously unrecorded features in the fields near Newgrange this evening," he wrote.

"They look like giant henges or enclosures, very similar in scale to Site P, and forming a row-of-three with P. Have a look at these very exciting photographs. If these turn out to be substantial discoveries, then I would be nothing short of utterly elated, chuffed and excited. We're already discussing them with an archaeologist and to say he's very excited is a huge understatement!"

Newgrange dates from approximately 3,000 BC, but this new find could have been constructed 500 years after the UNESCO World Heritage site. The Irish Department of Culture, Heritage and the Gaeltacht described the uncovering of the 656-foot wide circle as “a very significant find” and on Friday carried out their own aerial survey which showed further "unparalleled" prehistoric sites.

“The reconnaissance carried out Friday by archaeologists from our National Monuments Service has resulted in the discovery of an array of very significant additional archaeological features in the vicinity across the River Boyne floodplain south of the Newgrange passage tomb,” said Irish Minister for Heritage Josepha Madigan after the government’s survey.

“With further research, we know these fascinating finds will add greatly to our knowledge of the wonderful Brú na Bóinne World Heritage landscape.”

“My department wants to promote knowledge of archaeological discoveries & are delighted that this site will open to the public during Heritage Week next month”. Speaking at #Dowth Hall today where remains of 5,500 yr old Passage Tomb has been discovered @DeptAHG @ucdarchaeology pic.twitter.com/oehIdlaahH

These discoveries are also believed to date to the Neolithic period some 5,000 years ago. Government officials will now research further to map the new discoveries in the hope of understanding their connection with the other known megalithic monuments in the area. Minister Madigan announced on Monday that the Dowth discovery would be open to the public during Heritage Week in August.

Brú na Boinne (which is Irish for the Palace of the Boyne) refers to the area within the bend of the River Boyne in Co. Meath which contains one of the world’s most important prehistoric landscapes. The UNESCO World Heritage site is dominated by the three well-known large passage tombs, Newgrange, Knowth and Dowth with Knowth, in particular, containing the largest assemblage of megalithic art in western Europe.

"This is the most significant megalithic find in Ireland in the last 50 years, since the excavation of Knowth,” said Dr. Stephen Davis of the UCD School of Archaeology of the latest megalithic tomb find.

"The spate of archaeological discoveries in Brú na Bóinne in recent weeks highlights what a globally significant place this is."

Today Minister for Culture, Heritage and the Gaeltacht @josephamadigan unveiled the 5,500 year old passage tomb cemetry that has been unearthed at the Devenish Lands at Dowth. This is the find of a lifetime following a partnership with @ucdarchaeology and Devenish. pic.twitter.com/gWOs2FK5ZN

"Devenish invested in this farm at Dowth because of its fertile soil, its location beside the Boyne and its beautiful landscape,” added Owen Brennan, Executive Chairman of Devenish.

"From our archaeological research, it seems we made the same decision for the same reasons as a long line of our farming colleagues from the Neolithic, the Bronze Age, medieval and more recent times.

"The monuments here, created by some of Ireland's first farmers, capture our imaginations and those of our visitors to the Devenish Lands of Dowth. It is an inspirational landscape to showcase Devenish's work on sustainable agriculture and promoting human health through nutrition."

Have you visited Brú na Bóinne in your travels of Ireland? Let us know what you thought of the experience in the comments section below.