The banner found at Countess Markiewicz's home in Dublin was housed in London's Imperial War Museum until shortly before 2016. 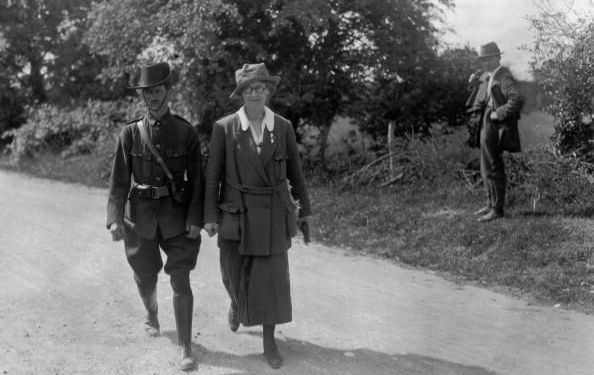 The banner found at Countess Markiewicz's home in Dublin was housed in London's Imperial War Museum until shortly before 2016.

For decades an artifact from the Irish revolutionary era was nestled within a WW1 exhibition in London's Imperial War Museum. This artifact was a banner belonging to Na Fianna Éireann, the Irish Republican boy scout organization co-founded by Countess Markiewicz.

The green banner, known as the Gal Gréine, displays the pike and sunburst logo of Na Fianna with lettering in gold thread which states in Irish:

A loose English translation of it is: "The purity of our hearts, the strength of our limbs, and commitment to our vow."

In the aftermath of the Easter Rising Countess Markiewicz was facing a court-martial in Richmond  Barracks while soldiers from the 3rd Battalion of the Royal Irish Rifles under the command of Lieutenant Colonel McCammond were raiding her home, Surrey House, in Rathmines, south Dublin.

The crown soldiers thoroughly ransacked the house and among the many items they seized was the Gal Gréine. It was presented to King George VI who placed it in his war museum in Windsor castle before it was put on display in the Imperial War Museum. The Gal Gréine was declared part of The Royal Collection and its website states: "the banner was discovered in her (Countess Markiewicz) home at the time of the Easter Rising in 1916 by 3rd Battalion, Royal Irish Rifles."

Countess Markiewicz had moved to Surrey house at 49 Leinster Road in 1912 and it became an open house for revolutionary minds. In the years preceding the Easter Rising, Surrey House was a hive of political activity and it was from here the Countess organized Na Fianna and where flags and banners such as the Gal Gréine were made.

When the soldiers raided Surrey House, they broke antique furnishing, tore apart the library and even dug up the garden. They took the Gal Gréine as a war trophy and then left the house to the mercy of looters.

Another war trophy claimed by the British after the Easter Rising was the Irish Republic flag which flew over the GPO. After the insurrection, British soldiers posed for a photograph with it - upside down as is the tradition with captured enemy flags - at the Parnell Monument. T

The flag was then taken across the Irish Sea where it lay in storage in England until 1966 when the Irish government successfully lobbied for its return, just in time for the 50th anniversary of the Easter Rising.

Like the Irish Republic flag, the Gal Gréine was also successfully returned to Dublin, in 2016, just in time for the 100th anniversary of the Easter Rising!