He may be better known for his stories "The Informer" and "The Sniper" but as one of the founding members of the Communist Party in Ireland, O'Flaherty's early life was one of left-wing rebellion. 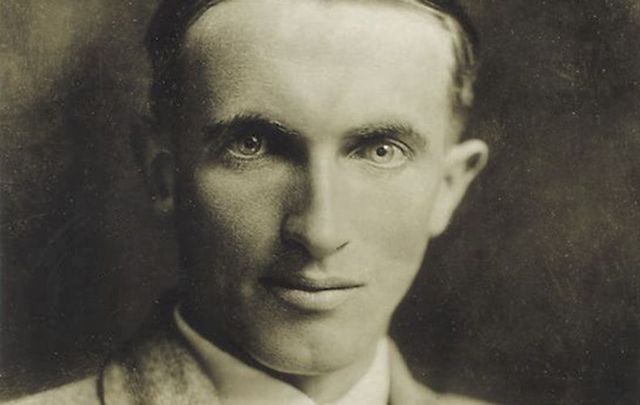 He may be better known for his stories "The Informer" and "The Sniper" but as one of the founding members of the Communist Party in Ireland, O'Flaherty's early life was one of left-wing rebellion.

Just days after the formation of the Irish Free State in 1922, writer Liam O'Flaherty led a little-known and short-lived occupation of the Rotunda Hall in Dublin city.

After serving with the Irish Guards in World War I where he suffered from severe shell shock in Flanders, O'Flaherty was discharged with a disability pension and led a somewhat nomadic life for the next few years. His travels took him around the Mediterranean, South America, Canada and North America where his long-held left-wing ideals swelled.

He brought his political convictions back home to Ireland in 1921 and became a familiar fixture on Dublin's O'Connell Street, where from a small newsstand he sold the Workers Republic newspaper. It wasn't long before he gave up the role of the radical newspaper seller in order to lead a small working-class revolt just a few yards up the street in the Rotunda Hall.

On Monday, January 16, 1922, the Provisional Government of the Irish Free State was announced and two days later approximately 200 unemployed men, made up mostly of jobless dockers, marched into the Rotunda Concert Hall and Pillar room, which is now the Gate Theatre, and they occupied it. O'Flaherty was at the head of this band as the chairman of the Council of Unemployed in Dublin and ordered red flags to hang out the windows of the Rotunda.

O'Flaherty admired workers like those in Cork and Limerick who took over workplaces to set up their own soviets and he sought something similar with his occupation of the Rotunda. Due to its historical link with the era of revolution, the Rotunda was picked by O'Flaherty as a significant place to make a social stand. It was at the Rotunda in 1905  that Sinn Féin was founded and it was where the Irish Volunteers was founded in 1913.

O'Flaherty spoke to journalists outside the Rotunda, informing them that if he and his men were apprehended, they would not recognize a court run by a government that did not recognize the unemployed.

The occupation of the Rotunda was not a half-hearted affair. A maintenance fund was set up to ensure the occupation could last while food provisions were organized from Boland's bakery on Capel Street. Morale was also kept high through lectures and concerts.

While a Workers' Republic was on the minds of those inside the Rotunda, outside on the street the mood for left-wing politics was not as clean cut. A nightly mob would gather outside the Rotunda where attempts were made to remove the red flags. To disperse the angry mob shots were fired over their heads from the occupiers inside the Rotunda. At one stage the mob tried to storm the building but O'Flaherty and his men managed to push them back out.

Read more: A century after his death, Wexford still reveres this Irish rebel

The occupation which began that Wednesday came to an end 4 days later at midnight Saturday when O'Flaherty and his men left without any incident. The growing resentment from the mobs gathered outside on the street pushed the authorities into giving O'Flaherty an ultimatum - leave or be forcefully removed. To avoid any bloodshed O'Flaherty ended the occupation of the Rotunda and with his revolver hidden in his coat,  he managed to slip away from the authorities and flee to Cork.

Months later O'Flaherty came out of hiding and traveled back to Dublin to fight with the Anti-Treaty side. He was not long in Dublin before he took flight again. O'Flaherty took a ship to Liverpool where his political activism ended and his literary career began.

The four-day Rotunda occupation led by Liam O'Flaherty and hundreds of unemployed men has now been submerged into the bigger historical picture of that time, while O'Flaherty 's political involvement during that turbulent era has been trumped by his literary success.