The Kilkenny Famine Experience brings you on a free tour through the Kilkenny Union Workhouse. 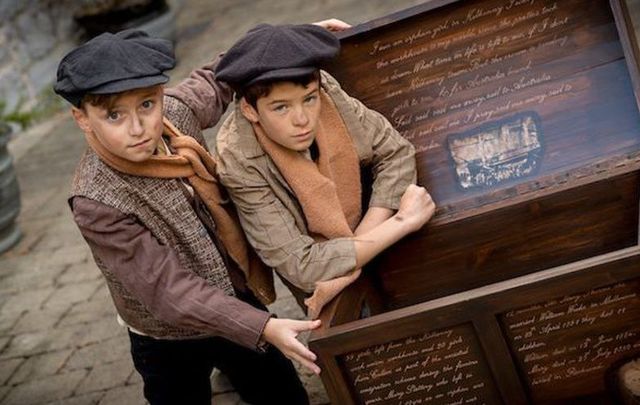 The Saul brothers were admitted to the workhouse in Kilkenny after being abandoned by their parents in Dublin. Kilkenny Famine Experience

Discover the heartbreaking stories of 976 famine victims buried on the site of the Kilkenny Famine Experience.

On November 7, 2017, a new look at the atrocities of the Irish Great Hunger opened to the public at the Kilkenny Famine Experience at MacDonagh Shopping Center. The free tour takes visitors around the grounds of the Kilkenny Union Workhouse, the burial ground of some 976 famine victims who were discovered unexpectedly in 2005.

Through an audio visual tour, the stories of these victims are re-imagined, in particular the story of young brothers John and Patrick Saul who were abandoned during the famine years by their parents on the Dublin docks. Facing a devastating and lonely walk back to their home in Clonmel, Co. Tipperary, the brothers walked as far as Kilkenny before presenting themselves at the workhouse. Being accepted, they perhaps saved their lives and avoided starvation on the remainder of the road by doing so.

“You have a responsibility not to forget these people, to celebrate their lives as individuals. They were more than just remains,” states Marion Acreman of the Kilkenny Famine Experience and MacDonagh Shopping Center.

“They all had relationships and fears and hopes before they came to the workhouse and indeed, while they were in the workhouse.”

Herself the mother of two young boys, Acreman was particularly touched by the tale of the Saul brothers and their struggle, her current office placed in the space that would once have been the workhouse men’s dormitory.

“People focus on the bad time but there are little touches of humanity,” she states.

“Shade of light in the darkness … shows hope that the workhouse may have saved those boys.”

While the center established the tour and commissioned an 8-foot bronze statue to honor the Saul brothers, they also asked the public to contribute and to play a role in establishing this part of Kilkenny history into their collective remembrance.

Over the past year, 976 locals have visited the workhouse, signing their names and leaving a copy if their fingerprint, which was then cast into a brass adornment for limestone crypt where the famine victims' remains are now found. With no records of these victims ever found, it was important for Acremen that some kind of record was now compiled to remember them by.

Of those who survived the workhouse, some girls and women were among those selected by the Earl Grey scheme to be shipped down to Australia to become wives for the English and Irish convicts there. One of these women was Mary Theresa Slattery, whose great-granddaughter Kerry Tupper, a high school teacher from Sydney, has recently traveled back to the Kilkenny workhouse to reconnect with her family’s history.

"People who migrated didn’t come home. They went and made new lives but their minds must have always traveled back to this place,” Tupper said.

“It was emotional for me and it was startling to consider the suffering that had happened there and to see the sights that Mary would have seen and think about her experiences, what she would have had to endure there - to have gone in with her family and and far as we know, to have come out the only member of her family.

“Mary and those girls were the mothers of thousands of Australian children and they helped shape the national character of Australians. That has been very apparent to me meeting Irish people, how there’s an aspect of Australian character and I see where it’s come from.

Read more: Letters of a family to their son in America after the Famine

“It’s really important for history in Kilkenny, for people to be able to relate to what’s happened there, to not put the famine aside as something that can’t be spoken of and people who can’t be remembered.”

The Kilkenny Famine Experience tour is now open for bookings. You can find more info or book your tour here.

Did your ancestors leave Ireland during the Great Hunger? Tell us their stories in the comments section, below.