JFK, Martin Luther King and the battle over human rights

'Kennedy and King: The President, The Pastor, and the Battle Over Civil Rights' by Steven Levingston hit bookstores last week. 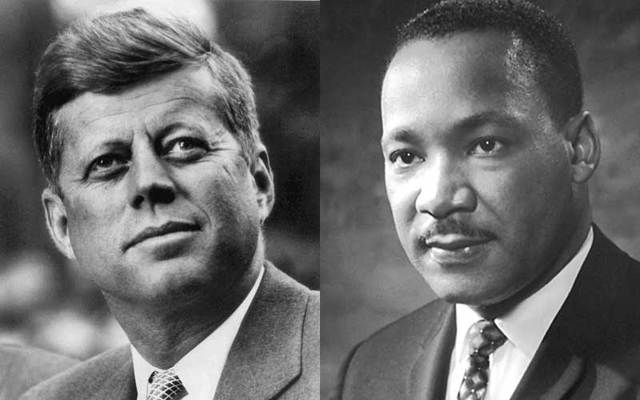 A new political book attempts to examine the rise of John F. Kennedy and Martin Luther King Jr, their complicated relationship with one another, and their influence on civil rights in the 1960s.

'Kennedy and King: The President, The Pastor, and the Battle Over Civil Rights' by Steven Levingston, which is published by Hachette Books and hit stores last week, “traces the emergence of two of the twentieth century's greatest leaders, their powerful impact on each other and on the shape of the civil rights battle between 1960 and 1963.”

Levingston said that the grudging partnership that evolved between the two leaders has important lessons for today’s political world.

'Kennedy and King: The President, The Pastor, and the Battle Over Civil Rights' by Steven Levingston. Credit: Hachette Books

“'Kennedy and King' is about the complicated relationship between two icons but it’s not dusty history,” said Levingston, at book party in Greenwich Village, according to the New York Post. “It’s relevant today because it tackles issues of moral courage, conscience, empathy and fidelity to American values — all now more important than ever.

“It also portrays a tale of people speaking truth to power and, significantly in Kennedy’s case, power listening and learning and changing the world. This is a lesson as pertinent now as it ever was.”

Levingston said the book, which he worked on for about two years, was inspired by what he discovered about JFK while writing 'The Kennedy Baby: The Loss That Transformed JFK,' an e-book about the birth and death of Patrick Kennedy, the president and Jackie’s third child, born in August 1963.