A speech that JFK's never got to deliver has been restored thanks to an Irish creative agency and the Times of London. 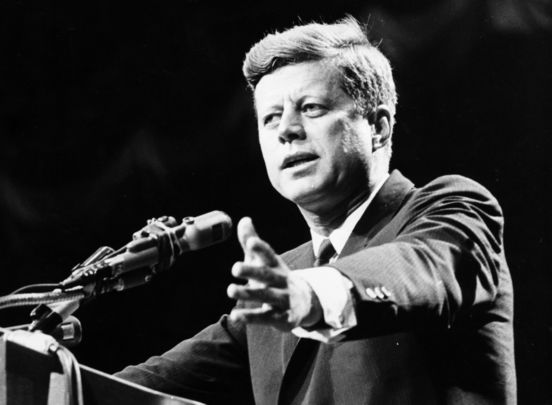 A speech that JFK never got to deliver has been restored thanks to an Irish creative agency and the Times of London.

November 22, 2018 marks the 55th anniversary of the untimely death of President John F. Kennedy.  To commemorate, we look back at a speech that Kennedy was expected to recite in Texas on the day he was assassinated as it bears an even more important meaning today.

The late president was scheduled to make said speech to the Texas Democratic State Committee in the Municipal Auditorium in Austin, Texas, on the evening of 22 November 1963.

However, he was assassinated earlier that day in Dallas as he drove through the Dealey Plaza.

Thanks to the Times of London and the Irish creative agency, Rothco, Kennedy's speech has been restored.

According to Snopes.com, it took eight weeks to bring the 2,590 words to life. Sound engineers used 116,777 sound units from 831 of his speeches and radio addresses which they split in half and analyzed for pitch and energy.

The resulting audio can be found below.

A transcript of the speech is also available in the John F. Kennedy Presidential Library and Museum. The penultimate paragraph of that text is particularly poignant - especially his line "our duty as a party is not to our party alone, but to the Nation, and indeed, to all mankind."

In recent months, it seems to have been circulated on several social media platforms.

View an excerpt from the speech below:

"Finally, I said in Lubbock in 1960, as I said in every other speech in this State, that if Lyndon Johnson and I were elected, we would get this country moving again. That pledge has been fulfilled. In nearly every field of national activity, this country is moving again — and Texas is moving with it. From public works to public health, wherever Government programs operate, the past 3 years have seen a new burst of action and progress — in Texas and all over America. We have stepped up the fight against crime and slums and poverty in our cities, against the pollution of our streams, against unemployment in our industry, and against waste in the Federal Government. We have built hospitals and clinics and nursing homes. We have launched a broad new attack on mental illness and mental retardation. We have initiated the training of more physicians and dentists. We have provided 4 times as much housing for our elderly citizens, and we have increased benefits for those on social security."

"Almost everywhere we look, the story is the same. In Latin America, in Africa, in Asia, in the councils of the world and in the jungles of far-off nations, there is now renewed confidence in our country and our convictions."

"For this country is moving and it must not stop. It cannot stop. For this is a time for courage and a time for challenge. Neither conformity nor complacency will do. Neither the fanatics nor the faint-hearted are needed. And our duty as a party is not to our party alone, but to the Nation, and, indeed, to all mankind. Our duty is not merely the preservation of political power but the preservation of peace and freedom."

"So let us not be petty when our cause is so great. Let us not quarrel amongst ourselves when our Nation’s future is at stake. Let us stand together with renewed confidence in our cause–united in our heritage of the past and our hopes for the future — and determined that this land we love shall lead all mankind into new frontiers of peace and abundance."

What do you make of this standout excerpt? Let us know in the comments below.