Mary Josephine ‘May’ Barrett narrowly escaped death during the sinking of the Lusitania, on which she was traveling to her native Ireland. 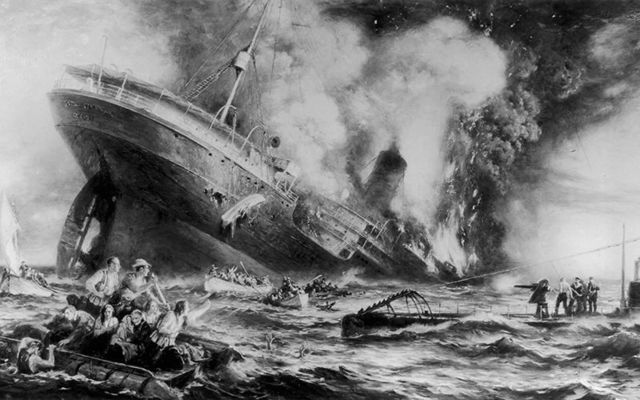 The sinking of the Lusitania: Plunging into the icy water and being taken for dead the incredible tale of May Barrett Keegan. Getty

On May 7, 1915, the Lusitania sinks off the coast of Ireland. This is the astounding tale of one Irish grandmother who was a passenger on the ill-fated ship and how she escaped.

My grandmother May Barrett Keegan was on board the Lusitania on that fateful day May 7, 1915, with her friend Kathleen McDonnell when it was struck by a torpedo from a German U-boat.

Mary Josephine ‘May’ Barrett, my grandmother, was born on Tuesday, 11 March 1890, one of ten children born to David and Mary (née Connell) Barrett. According to her birth certificate, her father was a laborer and the family lived in 10 Coleman’s Lane, Cork City.

Kathleen ‘Kitty’ McDonnell was born in Cork City, Ireland in 1890. Her parents, Eugene and Ellen, had four sons and another daughter. The family resided at 25 Prosperity Square, Cork. Eugene McDonnell was a plasterer by trade, as were all male members of his family at that time.

On 4 October 1919, Kitty married Patrick Fitzgerald at the South Parish Church in Cork City.  Then, on 27 August 1920, Kathleen Fitzgerald, described as a housewife, 5' 3" in height, aged 30 and of fair complexion, brown hair and hazel eyes, arrived in New York on board the SS Baltic from Queenstown. She gave her intended address as being with her husband at 853 Bergen Avenue, Jersey City, New Jersey.

Their Lusitania adventure began in 1915, having lived in the US for four years both May and Kitty decided to return home. May was probably returning upon hearing the tragic news of the death of her goddaughter, Annie, from meningitis at the Cork fever hospital. It is also alleged she had all her worldly possessions with her.

They booked passage on the Lusitania, sailing on Saturday, 1 May 1915. They probably chose the Lusitania as it was the quickest means of returning home as there were several other options. There is no evidence to suggest that they knew anything about the Imperial German Embassy’s warning posted on the daily newspapers that morning.

There are many accounts of their passage on the fateful voyage. I will be as comprehensive as I can.

It is stated that both May and Kitty arrived at the Cunard berth at Pier 54 in New York harbor on 1 May in good time for the liner's scheduled 10 am sailing. From a letter that she wrote to the Cunard Line after the fateful voyage, we know that they booked “second cabin passage” and that she “occupied berth 3” in cabin E2, which she shared with Miss Mary Rooney and Miss Marzie McGovern.

According to the official record, the sailing was delayed until the afternoon as the Lusitania had to accommodate passengers, crew, and cargo from the Anchor Lines vessel, the SS Cameronia, which had been requisitioned by the British Admiralty for service as a troop ship at the end of April.

The Lusitania finally left port at 12.20.

May remembers the trip as being largely uneventful. Her recollection that the only thing that was different, because of the war, was the effort made to blacken the lights of the ship. “The liner wasn’t lit up in its usual manner and necessary lights were covered by canvas to reduce the possibility of them being seen from the sea.”

On the afternoon of 7 May, as the ship sailed just off the Cork coast, May and Kitty were having lunch in the second class saloon. One of their table companions, Joe by name, said, “You can almost see the smoke from your chimneys from here.” Joe was from either Dublin or Belfast. Fr. Pat Keegan, May’s son, believed that he was from Belfast. “They never got his surname. All they knew was Joe. He was working in some bank and that he was a Protestant.”

In May’s words, “A terrible explosion shook the ship.” She remembered an immediate rush from the dining room, resulting in a stampede. She recalled people being trampled upon. There was confusion everywhere. Joe got them both on deck (in one version of the story, he had come from the cable office).

He told them not to move from where they were. He ran off and got them two life-belts. He told them that the ship was sinking and asked if they would jump overboard. In their haste, Joe made an error in putting May's life jacket on her back to front. Kitty said that she would jump but May, who was unable to swim and had a terrible fear of the water, said, “I will stay on the ship." Kitty jumped.

Joe turned to May. She still refused to jump. He said, “say goodbye to me." May offered him her hand. “Ah”, he said, “give me your two hands and say goodbye properly." She did and, in the embrace, he lifted her and threw her overboard.

According to a version of her story, amidst the terror and confusion, she heard a group of people singing “Nearer My God to Thee”, just as the victims onboard the Titanic did.

When she hit the water, her watch stopped at 2.20pm. She was only half-conscious. She was floating around in the water for between three and five hours - the lifebelt which was unwittingly positioned back to front kept her mouth above the water - until she was picked up, it is believed by a lifeboat.

Some recordings state that Kitty and Joe were already on the boat although in another instance, Fr. Pat recalls, “She can remember hearing one of the men in the boat saying to his companions: ‘Leave the bodies. Just take the living.' A man was thrown on top of her. She thinks it was Joe.”

They were eventually brought to Queenstown on a fishing trawler, which had taken them from the lifeboat. Fr. Pat relates: "She did not remember much else except that she was safe. She can remember arriving in Queenstown and being put to bed in a hotel or hospital – she cannot remember which.” In another version, she recalled people on the quayside clambering for souvenirs and that her lifebelt was snatched from her.

May’s original version of the events, as recorded on the New York Times on 10 May 1915, differs in some ways to what she handed down to family and friends. The New York Times described her as a carrying ‘a bold spirit in a slight frame’ and said that she ‘was able to give a perfectly connected and vivid account of what happened:'

We had gone into the second saloon and were just finishing lunch. I heard a sound something like the smashing of big dishes, and then there came a second and a louder crash. Miss Macdonald (sic) and I started to go upstairs, but we were thrown back by the crowd. Then the ship stopped, and we managed to get up to the second deck, where we found sailors trying to lower the boats.

There was no panic, and the ship's officers and crew went about their work quietly and steadily. I went to get two life belts, but a gentleman standing by told us to remain where we were and he would fetch them for us. He brought us two life belts and we put them on.

By this time the ship was leaning right over to starboard, and we were both thrown down. We managed to scramble to the side of the liner. Near us, I saw a rope attached to one of the lifeboats and I thought I could catch it. So we murmured a few words of prayer and then jumped into the water. I missed the rope but floated about in the water some time.

I did not lose consciousness at first, but the water got into my eyes and mouth and I began to lose hope of ever seeing my friends again. I could not see anybody near me, and then I must have lost consciousness, for I remember nothing more until one of the Lusitania's lifeboats came along. The crew was pulling on board a woman who was unconscious, and they shouted to me, 'You hold on a little longer.' After a time they lifted me out of the water, and then I remember nothing more for a time that seemed to be an age.

In the meantime, our boat had picked up twenty others, and when I became conscious it was getting late in the evening. We were transferred to the trawler and taken to Queenstown.

Miss Macdonald told me how she floated about nearly four hours in a dazed state. She had little remembrance of what passed until a boat saved her. She remembered somebody saying, 'Oh, the poor girl is dead.' She had just strength to raise her hand and they returned and pulled her on board.

May's family had no idea that she was on board the Lusitania until they received a telegram stating that she was safe in Queenstown. When they got the news, her brother-in-law, Jack, went to Queenstown and began his search for her and for Kitty. He found them both, safe and unharmed physically.

May and Kitty did all they could to trace Joe. They put notices in the newspapers but there was never a reply.

On 23 May 1915, May wrote a letter to the Cunard Company enquiring about compensation for the loss of her possessions. She was claiming a total of £220, which included clothing, jewelry and $900 (£180) in cash which she claimed was in her pocketbook which was lost. Cunard replied to her on the 26 May 1915, in which they first congratulated her on surviving, and then suggested she contact government officials in London to seek compensation from Germany after the War, and also to contact the Liverpool Relief Fund, who they suggested would give her application for financial assistance ‘prompt and courteous’ attention. There is evidence that she contacted the Liverpool Relief Fund, but it is not known what award, if any, were made to her.

Fr. Pat recalls his mother telling him that, in the weeks after the sinking, May suffered from post-traumatic stress. “She would not leave the house. She found it hard to face people. One of the priests of the Holy Trinity church, Fr. Malachy OFM, Cap., came to visit her. She had been staying in bed. He helped her to face the people who thronged the street. He persuaded her to get on to a side-car and took her for a drive. She never looked back after that.”