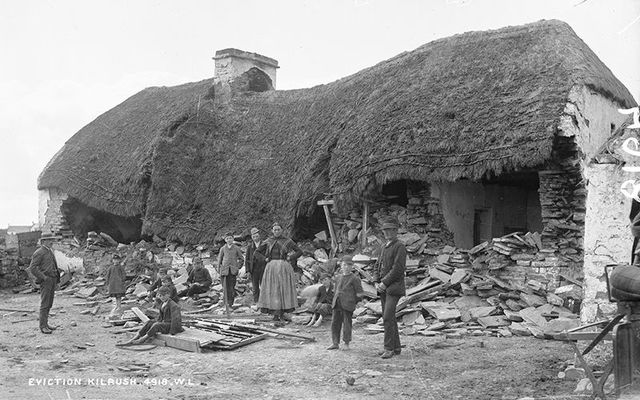 In the decades following Ireland's Great Hunger, landlords showed little mercy on their tenant farmers and their families, who had just defied all odds with their survival. Instead, these landlords, many of them absentee, would hike rents without regard to circumstance or their tenants' ability to pay, and then call upon authorities to have their tenants evicted.

The Irish Land Wars, waged in response to these practices, were a two-decades-long campaign of civil resistance and unrest, as tenants refused to leave without putting up a fight, preventing the British constabulary from entering their homes with a variety of hard-scrabble tactics. 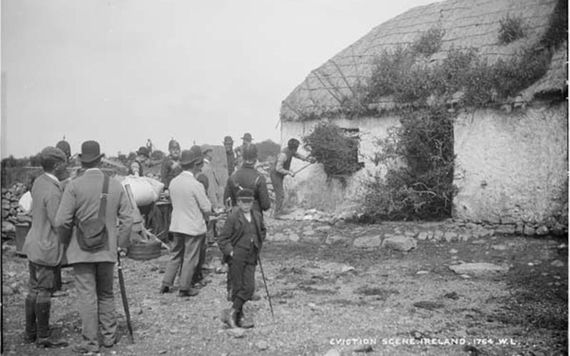 Brush stuffed into the windows in preparation. Photo: National Library of Ireland

One of the most famous evictions and resistance movements took place in July, 1888, on the Valdeleur Estate near Kilrush, Co. Clare. IrishCentral featured photographs of these evictions from the National Library of Ireland and the Clare County Library in a recent story on the Land Wars and the mercilessness of British landlords during this time.

Afterward, we were fascinated to hear from Ed O'Shaughnessy, the man whose great-grandparents bore witness to these evictions. The fascinating part? They were not locals, but tourists visiting from America.

The evictions on the estate, which was owned by absentee landlord Captain Hector S. Vandeleur, spanned the course of two weeks, impacting many homes and families, with a new eviction carried out day after day.

Because the negotiations had been so drawn out, both the Irish Land League and the evicting forces had time to gather support, which meant the spectators to these evictions numbered in the hundreds, and there was even a sizeable press corps to document the events.

Families resisted by whatever means possible, pouring boiling water on the officers who came to evict them, setting brush ablaze to create a barrier, flinging pots and pans out of their windows and barricading themselves inside. In most cases, the goal was not to prevent eviction at any cost but to put up a noble fight. The British authorities had strength in numbers and in their secret weapon: a battering ram, which wreaked havoc on many houses. 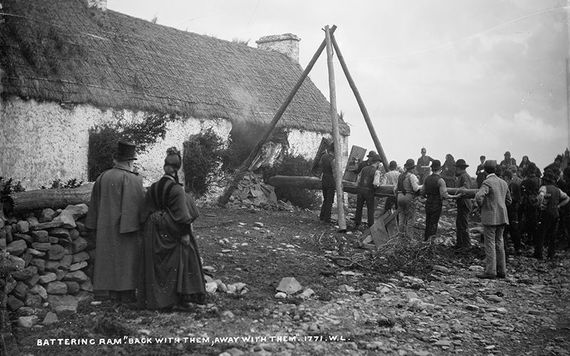 O'Shaughnessy's great-grandfather, Major E.J. O'Shaughnessy, was, as he wrote in an article for The Other Clare in 2015, born in Canada and raised in the US to Irish parents who had fled the Great Hunger. He'd worked dedicatedly with the US Land League for eight years, had been a Canadian Feinan, and was by 1888 part of the New York branch of Clan na Gael. He was on a tour of Europe and they had stopped in Ireland to re-connect with the homeland.

What's more, O'Shaughnessy has argued that the photographs of the Vandeleur Estate evictions have been inaccurately sweepingly attributed to one photographer, Robert French. According to O'Shaughnessy's great-grandfather's copious notes, he purchased the photographs from a man from Limerick, Thomas O'Connor. 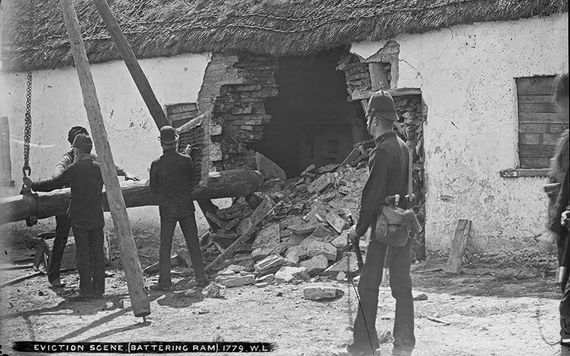 As O'Shaughnessy noted in a National Library of Ireland discussion:

"My great-grandfather, Major E. J. O'Shaughnessy, his wife Margaretta Dunn O'Shaughnessy, and her sister Ellen Dunn, were witnesses to the evictions on the Vandeleur Estate in July 1888. My great grandfather wrote of his observations and opinions to friends and associates in New York City, and very likely to his family in Montreal, Canada.

"We know of three publications, two in New York City in 1889, subsequently reprinted in a Montreal newspaper, and the photo contribution to an article on Clare featured in the American magazine The Gael in 1901. We know that my great-grandfather had several photos of the evictions in his personal collection. He did not take these photos and gives credit to a professional Limerick photographer Thomas O'Connor.

"Though my great grandfather's collection of photos is no longer in the family's possession, I suspect these were but copies, and that the originals still exist in a private collection. I also suspect that my great grandfather is to be photo in the background in one of the photos. He was keen to be recorded at such a historical and at the same time, to him, shocking, event.

"Of further interest to some, perhaps, is that my great-grandfather was not merely a tourist, but also an activist, a member of the New York City Land League organizations, a fundraiser for the Irish Parliamentary Fund, a former Canadian Fenian, he always said, and almost certainly a Clan na Gael member at the time of his visit to Clare." 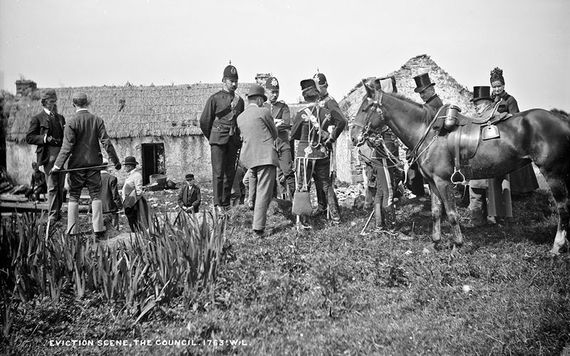